Chilhowee Mountain is the name of two non-contiguous low ridges in the U.S. state of Tennessee. The northern section is at the outer edge of the Great Smoky Mountains, stretching between the Little Tennessee River and Chilhowee Dam to the west, and the Little Pigeon River watershed to the east. The southern section is within the outer edge of the Unicoi Mountains in Polk County. While not entirely within the Great Smoky Mountains National Park, the northernmost mountain's crest is traversed by the westernmost section of the Foothills Parkway. 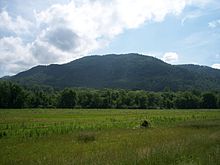 While the northern ridge is 35 miles (56 km) long, it rarely reaches a width of more than 3 miles (4.8 km) or 4 miles (6.4 km). Little River cuts a large gap in the middle of the mountain (near Walland), dividing it into eastern and western sections. The highest point on the western section is 2,650 ft (808 m) at a knob known as Look Rock. The highest point on the eastern section, known as The Three Sisters, rises to 2,843 ft (867 m), and is visible from nearby Maryville, Tennessee.

The southern ridge is about 15 miles (24 km) long, and sits entirely within the Cherokee National Forest. The Ocoee River passes along its southern base, along with the Ocoee Scenic Byway, part of U.S. Route 64. The mountain is separated from Oswald Dome to the north by a saddle, although both are technically part of the same ridge. The highest point on this section is 2,618 feet (798 m).[1] The mountain is accessible from US 64 via a paved forest service road, which contains multiple overlooks. A campground with an artificial lake, operated by the Forest Service, is located atop the mountain. Benton Falls is a waterfall on the eastern escarpment of the mountain, and is accessible via a trail that begins at the campground.

Chilhowee Mountain derives its name from Chilhowee, a Cherokee village in the 18th century. The etymology of the Cherokee name is unclear,[2] and may be derived from the Muscogean name Chalahume, an earlier Creek name for the village. In English it has also been written "Chilhoe".

Retrieved from "http://en.turkcewiki.org/w/index.php?title=Chilhowee_Mountain&oldid=1061929309"
This website is a mirror of Wikipedia, and is not affiliated with the Wikimedia Foundation.
Categories:
Hidden categories: