The Cherokee National Forest is a United States National Forest located in the U.S. states of Tennessee and North Carolina that was created on June 14, 1920. The forest is maintained and managed by the United States Forest Service. It encompasses an estimated area of 655,598 acres (2,653.11 km2).

The Cherokee National Forest headquarters are located in Cleveland, Tennessee.

The Cherokee National Forest mostly lies within eastern Tennessee, along the border with North Carolina, and comprises nearly the entire border area except for sections within the Great Smoky Mountains National Park and the Copper Basin. The Cherokee National Forest has two separate sections: a northern region to the northeast of the Great Smoky Mountains National Park and a southern section to the southwest of the Smokies.[4] 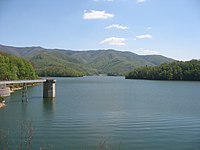 Recreation opportunities in the Cherokee National Forest are diverse. The forest's fast-flowing rivers support trout fishing. Rainbow trout are stocked in many streams and rivers. Brook trout and brown trout are also present. Bass, bluegill and crappie are found in the forest's lakes, which are also open to wind surfing, water skiing and boating.

Trails criss-cross the forest. In addition to the Appalachian Trail, these include the John Muir Recreation trail, other hiking trails, and some trails designed for equestrian use. Bicycle trails are being developed.

Camping is available in RV campgrounds and tent-only camping areas, and primitive tent camping is allowed throughout much of the forest.

The Unicoi Mountains are a mountain range rising along the border between Tennessee and North Carolina in the southeastern United States. They are part of the Blue Ridge Mountain Province of the Southern Appalachian Mountains. The Unicois are located immediately south of the Great Smoky Mountains and immediately west of the Cheoah Mountains. Most of the range is protected as a national forest, namely the Cherokee National Forest on the Tennessee side and the Nantahala National Forest on the North Carolina side— although some parts have been designated as wilderness areas and are thus more strictly regulated. 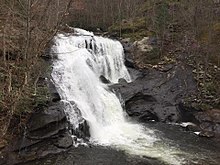 Retrieved from "http://en.turkcewiki.org/w/index.php?title=Cherokee_National_Forest&oldid=997994284"
This website is a mirror of Wikipedia, and is not affiliated with the Wikimedia Foundation.
Categories:
Hidden categories: