The Cessna Skymaster is an American twin-engine civil utility aircraft built in a push-pull configuration. Its engines are mounted in the nose and rear of its pod-style fuselage. Twin booms extend aft of the wings to the vertical stabilizers, with the rear engine between them. The horizontal stabilizer is aft of the pusher propeller, mounted between and connecting the two booms.[1] The combined tractor and pusher engines produce centerline thrust and a unique sound.[2] The Cessna O-2 Skymaster is a military version of the Cessna 337 Super Skymaster.

In February 1965, Cessna introduced the Model 337 Super Skymaster.[5] The model was larger, and had more powerful engines, retractable landing gear, and a dorsal air scoop for the rear engine. (The "Super" prefix was subsequently dropped from the name.)[2] In 1966, the turbocharged T337 was introduced, and in 1973, the pressurized P337G entered production.[2]

Cessna built 2993 Skymasters of all variants, including 513 military O-2 versions.[1] Production in America ended in 1982, but was continued by Reims in France, with the FTB337 STOL and the military FTMA Milirole.[4]

The Skymaster handles differently from a conventional twin-engine aircraft, primarily in that if an engine fails, the plane will not yaw toward that engine. Without the issue of differential thrust inherent to conventional (engine-on-wing) twins, engine failure on takeoff will not produce yaw from the runway heading. With no one-engine-out minimum controllable speed (Vmc), in-flight control at any flying speed with an engine inoperative is not as critical as it is with engines on the wing with the associated leverage; however, performance in speed and, particularly, rate of climb are affected. Flying a Skymaster requires a pilot to hold a multiengine rating, although many countries issue a special "centerline thrust rating" for the Skymaster and other similarly configured aircraft.[2]

Ground handling requires certain attention and procedures. The rear engine tends to overheat and can quit while taxiing on very hot days.[6] Accidents have occurred when the runway is shorter than the single-engine take-off roll and pilots, unaware of a rear engine shutdown, have attempted take-off on the nose engine alone.[7] Federal Aviation Administration Airworthiness Directive 77-08-05 prohibits single-engine take-offs and requires the installation of a placard marked "DO NOT INITIATE SINGLE ENGINE TAKEOFF".[8]

The Skymaster's unique sound is made by its rear pusher propeller slicing through turbulent air from the front propeller and over the airframe while its front tractor propeller addresses undisturbed air.[2]

From 1976 until the middle 1990s, the California Department of Forestry and Fire Protection used O-2 variants of the 337 Skymaster as tactical aircraft during firefighting operations. These were replaced with North American OV-10 Broncos, starting in 1993.[9]

Main article: Brothers to the Rescue

From 1991 until 2001 the Cuban exile group Hermanos al Rescate (Brothers to the Rescue) used Skymasters, among other aircraft, to fly search and rescue missions over the Florida Straits looking for rafters attempting to cross the straits to defect from Cuba, and when they found them, dropped life-saving supplies to them. Rescues were coordinated with the US Coast Guard, which worked closely with the group. They chose Skymasters because their high wing offered better visibility of the waters below, they were reliable and easy to fly for long-duration missions (averaging 7 hours), and they added a margin of safety with twin-engine centerline thrust. In 1996, two of the Brothers to the Rescue Skymasters were shot down by the Cuban Air Force over international waters. Both aircraft were downed by a MiG-29, while a second jet fighter, a MiG-23, orbited nearby.[10] 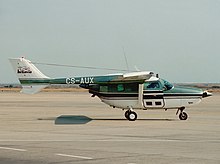 Mozambique
Força Aérea de Moçambique (3 x FTB-337G) - ex-Portuguese Air Force FTB-337G refurbished and offered by the Government of Portugal to Mozambique in 2011 and 2012.[19]

Portugal
Portuguese Air Force[3] (32 × FTB-337G): Purchased in 1973 to replace the force's aging Dornier Do 27 fleet, which had been used intensively in the Portuguese Colonial War. The first 337 deliveries did not arrive until December 1974—after the end of the war. The last Skymaster in service with the Portuguese Air Force was retired on July 25, 2007.

Wikimedia Commons has media related to:
Cessna 337 (category)
Retrieved from "http://en.turkcewiki.org/w/index.php?title=Cessna_Skymaster&oldid=1068656067"
This website is a mirror of Wikipedia, and is not affiliated with the Wikimedia Foundation.
Categories:
Hidden categories: