Capital One Arena is an indoor arena in Washington, D.C. Located in the Penn Quarter neighborhood, the arena sits atop the Gallery Place rapid transit station of the Washington Metro. It has been largely considered to be a commercial success and is regarded as one of the driving catalysts of the revitalization of Washington, D.C.'s Chinatown neighborhood.[8]

The block where the arena was built, between 6th and 7th and F and G Streets, historically held a mix of residences and small businesses.[9] By the 1960s, it was suffering from urban decay, like much of the eastern end of Downtown Washington.[9] In 1973, while the Gallery Place Metro station was being developed below it, the District government bought the land in hopes of redeveloping it.[10] Capital Landmark Associates was selected in 1979 to develop the site with a planned mixed-use complex including retail, offices, apartments, and a hotel.[10] Most of the remaining buildings on the site were demolished in 1985.[9] The project languished for many years but never materialized, and was finally canceled in 1992.[9]

Before the arena's opening, the Capitals and the Wizards (then known as the Washington Bullets) played at USAir Arena in the Washington suburb of Landover, Maryland. The teams experienced subpar attendance because the location was inconvenient for both Washington and Baltimore residents, and their arena, though only 20 years old, was not up to the standards of other NBA and NHL venues.[11][12][13] In December 1993, Abe Pollin, the owner of both teams, began studying options to move the teams to a new arena to be built with public financing, with possible locations including Baltimore, downtown Washington, and Laurel, Maryland.[14][15]

A group of Washington business leaders brokered a deal between Pollin and the District government to build an arena at the Gallery Place site, with the District paying for the $150-million project.[16][17][18] The D.C. Council approved a special tax on businesses to finance the deal.[18] However, a competing proposal soon emerged, when Robert Johnson, head of Black Entertainment Television, offered to build the arena with mostly private financing.[19] With the arena deal facing criticism amid the District's budget crisis, Pollin eventually agreed to privately fund the construction of the building, which ultimately came to $200 million.[20][21] The District would pay for other costs, including purchasing the portion of the land it did not already own, preparing the site, and expanding the Metro station; these eventually amounted to $79 million.[21][22] The District leased the land to Pollin at a below-market rate of $300,000 per year.[23][24]

A naming rights deal was struck with MCI Communications to name the arena as the MCI Center.[25] The groundbreaking ceremony for the project was held in October 1995.[26] On December 2, 1997, the arena held its first event, a game between the Wizards and the Seattle SuperSonics, with President Bill Clinton in attendance.[27] 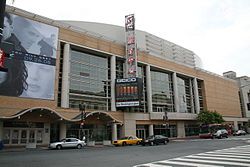 Capital One Arena, then the Verizon Center in 2008

In January 2006, Verizon Communications purchased MCI and the arena's name was changed accordingly to Verizon Center.[8] The following year, in 2007, the "first true indoor high-definition LED scoreboard" was installed in the arena.[30][31]

In June 2010, following Pollin's death in November 2009, the Leonsis group, newly organized as Monumental Sports & Entertainment, bought out Pollin's interests, gaining full ownership of the arena and the Wizards.[32]

A report emerged in May 2015 that Verizon would not renew its naming rights to the Verizon Center when its agreement with Monumental was to end in 2018.[33][34] In the same week, it was announced that Etihad Airways signed a deal to become the official airline of the arena, sparking speculation that Etihad might be the leading contender to assume naming rights in 2017.[35] However, on August 9, 2017, it was announced the bank Capital One had purchased the rights, renaming the venue Capital One Arena.[36][37][38]

In July 2020, bookmaker William Hill opened a sportsbook at the arena, following the 2018 legalization of sports betting in Washington.[39] It was the first brick-and-mortar sportsbook in the District, and the first to open at a professional sports venue in the United States.[39]

The arena hosted the 2016 Kellogg's Tour of Gymnastics Champions.[43]

In 2017, the Washington Valor began play at the arena for their inaugural season in the Arena Football League.[44] The Mystics moved after the 2018 WNBA season to a new, smaller arena in the Congress Heights area of southeast Washington.[45]

On October 2, 2019, the Capital One Arena hosted AEW Dynamite, the first televised professional wrestling event by All Elite Wrestling. It was broadcast on TNT in the United States of America and on ITV4 in the United Kingdom.[46][47]

On December 7, 2019, UFC on ESPN: Overeem vs. Rozenstruik was held at the arena.

When the arena opened, there was concern that it would lead to the displacement of Chinese businesses and culture in the area that is the city's Chinatown.[48] The surrounding area has indeed been dramatically gentrified, and most of the Chinese residents and businesses who lived and operated in the neighborhood when the arena first opened have been displaced because of the spike in real estate prices.[49] Recent estimates hold that the number of Chinese in the neighborhood is down to around 400 to 500.[49] The Chinese-owned restaurants and businesses in the Chinatown area are largely gone and there has not been a full-service Chinese grocery in the neighborhood since 2005.[49]

In December 2007, then-Capitals captain Chris Clark gained a bit of press by stating that he believed the arena had the worst ice in the NHL. "There's a lot of ruts in the ice. It's soft. It's wet half the time. I could see a lot of injuries coming from the ice there. It could cost [players] their jobs... Even guys on other teams say the same thing. When we're facing off, they say, 'How do you guys play on this?'" Capitals owner Ted Leonsis addressed this criticism directly.[50] The ice quality issue has been persistent both since the opening of the facility and with the Capitals franchise in general.[51] Since Leonsis' acquisition of the facility, the quality of the ice has gotten better[according to whom?] and number of complaints has noticeably decreased. During playoff games, the arena installs a system to help remove hot air and humidity to maintain the ice conditions during warmer times of the year.[citation needed]

Retrieved from "http://en.turkcewiki.org/w/index.php?title=Capital_One_Arena&oldid=1063964156"
This website is a mirror of Wikipedia, and is not affiliated with the Wikimedia Foundation.
Categories:
Hidden categories: