Jump to navigation Jump to search
Publishing business of the University of Cambridge
For the football club, see Cambridge University Press F.C. 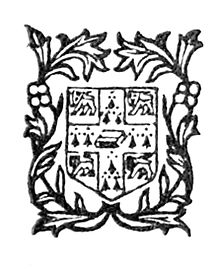 Cambridge University Press is the publishing business of the University of Cambridge. Granted letters patent by King Henry VIII in 1534, it is the oldest university press in the world. It is also the Queen's Printer.[2]

Cambridge University Press is a department of the University of Cambridge and is both an academic and educational publisher. It became part of Cambridge University Press & Assessment, following a merger with Cambridge Assessment in 2021. With a global sales presence, publishing hubs, and offices in more than 40 countries, it publishes over 50,000 titles by authors from over 100 countries.[3] Its publishing includes more than 380 academic journals, monographs, reference works, school and university textbooks, and English language teaching and learning publications. It also publishes Bibles, runs a bookshop in Cambridge, sells through Amazon, and has a conference venues business in Cambridge at the Pitt Building and the Sir Geoffrey Cass Sports and Social Centre. 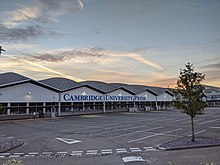 Cambridge University Press is the oldest university press in the world. It originated from letters patent granted to the University of Cambridge by Henry VIII in 1534. Cambridge is one of the two privileged presses (the other being Oxford University Press). Authors published by Cambridge have included John Milton, William Harvey, Isaac Newton, Bertrand Russell, and Stephen Hawking.[4]

University printing began in Cambridge when the first practising University Printer, Thomas Thomas, set up a printing house in 1584.[5] The first publication was a book, "Two Treatises of the Lord His Holie Supper".[6][7] In 1591 the first Cambridge Bible was printed by John Legate and in 1629 Cambridge folio edition of the King James Bible is printed by Thomas and John Buck.[6][7]

In July 1697 the Duke of Somerset made a loan of £200 to the university "towards the printing house and press" and James Halman, Registrary of the university, lent £100 for the same purpose.[8]

A new home for the press, The Pitt Building, on Trumpington Street in the centre of Cambridge was completed in 1833, which was designed by Edward Blore. It became a listed building in 1950.[9]

In the early 1800s the press pioneers the development of stereotype printing, allowing successive printings from one setting.[10][6] The press began using steam-powered machine presses by the 1850s. It was in this period that the press turned down what later became the Oxford English Dictionary – a proposal for which was brought to Cambridge by James Murray before he turned to Oxford.[4]

The press journals publishing programme began in 1893 with the Journal of Physiology and then The Journal of Hygiene and Biometrika. By 1910 the press had become a well-established journal publisher with a successful list which includes its first humanities title, Modern Language Review. 1956 sees the first issue of the Journal of Fluid Mechanics.

1895, the first title by a Nobel Laureate is published. It has published 170+ Nobel Prize winners.

1913, the Monotype system of hot-metal mechanised typesetting is introduced at the press.

1949, the press opens its first international branch in New York.[5]

The press moved to its current site in Cambridge in 1963. The mid-century modern building, University Printing House, was constructed 1961–3. The building was designed by Beard, Bennett, Wilkins and Partners.[11]

In 1975 the press launched its English language teaching publishing business.[12]

In 1981 the press moved to a new site on Shaftsbury Road. The Edinburgh Building was purpose-built with an adjoining warehouse to accommodate the press's expansion. It was built 1979-80 by International Design and Construction.[11] This site was sold to Cambridge Assessment in 2015 for the construction of The Triangle Building.[citation needed]

In 1986 the press acquired the long-established Bible and prayer-book publisher Eyre & Spottiswoode, which gave the press the ancient and unique title of 'The Queen's Printer'.[7]

In 1992 the press opened a bookshop at 1, Trinity Street, Cambridge which is the oldest-known bookshop site in Britain as books had been sold there since 1581.[13] In 2008 the shop expanded into 27 Market Hill where its specialist Education and English Language Teaching shop opened the following year.[citation needed] The press bookshop sells Press books as well as Cambridge souvenirs such as mugs, diaries, bags, postcards, maps.[14]

In 1993, the Cass Centre was opened to provide sports and social facilities for employees and their families.[11]

In 2012 the press sold its printing operation to MPG Books Group[15] and now uses third parties around the world to provide its print publications.

In 2019, the press released a new concept in scholarly publishing through Cambridge Elements where authors whose works are either too short to be printed as a book or too long to qualify as a journal article could have these published within 12 weeks.[16]

Cambridge University Press has stated its support for a sustainable transition to open access.[20] It offers a range of open access publishing options under the heading of Cambridge Open, allowing authors to comply with the Gold Open Access and Green Open Access requirements of major research funders. It publishes Gold Open Access journals and books and works with publishing partners such as learned societies to develop Open Access for different communities. It supports Green Open Access (also called Green archiving) across its journals and monographs, allowing authors to deposit content in institutional and subject-specific repositories. It also supports sharing on commercial sharing sites through its Cambridge Core Share service.

In recent years it has entered into several Read & Publish Open Access agreements with university libraries and consortia in several countries, including a landmark agreement with the University of California.[21][22] In its 2019 Annual Report, Cambridge University Press stated that it saw such agreements "as an important stepping stone in the transition to Open Access."[23]

In 2019, the press joined with the University of Cambridge's research and teaching departments to give a unified response to Plan S, which calls for all publications resulting from publicly funded research to be published in compliant open access journals or platforms from 2020. The response emphasized Cambridge's commitment to an open access goal which works effectively for all academic disciplines, is financially sustainable for institutions and high-quality peer review, and which leads to an orderly transition.[24]

Relationship with the University of Cambridge[edit] 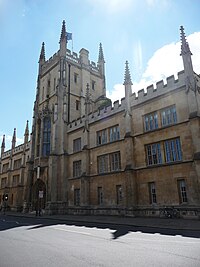 The Pitt Building in Cambridge, which used to be the headquarters of Cambridge University Press, is now a conference venue

The Press & Assessment Board is responsible for setting overarching strategic direction.[28] The Publishing Committees provide quality assurance and formal approval of the publishing strategy.[28]

The operational responsibility of the press is delegated by the Syndics to the Secretary of the Syndicate and Chief Executive.

In 2020 the university announced its decision to merge Cambridge University Press with Cambridge Assessment.[17]

In 2016, Cambridge Books Online and Cambridge Journals Online were replaced by Cambridge Core - a single platform to access its publishing. It provided significantly enhanced interfaces and upgraded navigation capabilities, as well as article-level and chapter-level content selection.[38] A year after Cambridge Core went live, the press launched Cambridge Core Share, functionality to allow users to generate and share links with free access to selected journal articles, an early sign of the press's commitment to open research.[39]

In 2020, partnered with online library Perlego to offer students access to digital textbooks.[34]

In 2021, the press acquired CogBooks. The technology adapts and responds to users, "recommending course material needed to optimise learning".[40]

In 2021 the press began migrating its website onto Drupal.[41]

In 2007, controversy arose over the press's decision to destroy all remaining copies of its 2006 book Alms for Jihad: Charity and Terrorism in the Islamic World, by Burr and Collins, as part of the settlement of a lawsuit brought by Saudi billionaire Khalid bin Mahfouz.[42] Within hours, Alms for Jihad became one of the 100 most sought after titles on Amazon.com and eBay in the United States. The press sent a letter to libraries asking them to remove copies from circulation. The press subsequently sent out copies of an "errata" sheet for the book.

The American Library Association issued a recommendation to libraries still holding Alms for Jihad: "Given the intense interest in the book, and the desire of readers to learn about the controversy first hand, we recommend that U.S. libraries keep the book available for their users." The publisher's decision did not have the support of the book's authors and was criticized by some who claimed it was incompatible with freedom of speech and with freedom of the press and that it indicated that English libel laws were excessively strict.[43][44] In a New York Times Book Review (7 October 2007), United States Congressman Frank R. Wolf described Cambridge's settlement as "basically a book burning".[45] The press pointed out that, at that time, it had already sold most of its copies of the book.

The press defended its actions, saying it had acted responsibly and that it is a global publisher with a duty to observe the laws of many different countries.[46]

In this case, originally filed in 2008, CUP et al. accused Georgia State University of infringement of copyright.[47] The case closed on 29 September 2020, with GSU as the prevailing party.[48]

On 18 August 2017, following an "instruction" from a Chinese import agency, Cambridge University Press used the functionality that had been built into Cambridge Core to temporarily delete politically sensitive articles from The China Quarterly on its Chinese website. The articles focused on topics China regards as taboo, including the 1989 Tiananmen massacre, Chairman Mao Zedong's Cultural Revolution, Hong Kong's fight for democracy and ethnic tensions in Xinjiang and Tibet.[49][50][51][52] On 21 August 2017, in the face of growing international protests, Cambridge University Press announced it would immediately repost the articles to uphold the principle of academic freedom on which the university's work is founded.[53][54]

The Cambridge Handbook of Privatization[edit]

In February 2021, the forthcoming Cambridge Handbook of Privatization was found to have included a chapter by John Mark Ramseyer in which he described Koreans murdered in the Kantō Massacre as "gangs" that "torched buildings, planted bombs, [and] poisoned water supplies." Editors Avihay Dorfman and Alon Harel acknowledged the historical distortions of the chapter, but gave Ramseyer a chance to revise. Harel described the inclusion of the original chapter as an "innocent and very regrettable" mistake on the part of the editors.[55][56] 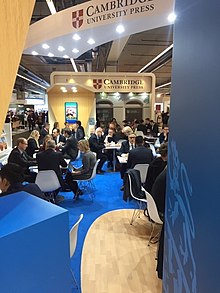 The press undertakes community engagement in Cambridge and around the world where there are Press employees. Annually, the press selects a UK Charity of the Year, which has included local charities Centre 33 (2016 and 2017), Rowan Humberstone (2018) and Castle School (2019). In 2016, some of the press's community works included its continued support to Westchester Community College in New York, the installation of hygienic facilities in an Indonesian rural school, raising funds to rehabilitate earthquake-stricken schools in Nepal and guiding students from Coleridge Community College, Cambridge in a CV workshop. On World Book Day 2016, the press held a digital Shakespeare publishing workshop for students and their teachers. Similarly, their Indian office conducted a workshop for teachers and students in 17 schools in Delhi to learn the whole process of book publishing. The press donated more than 75,000 books in 2016.[57]

An apprenticeship program for people interested in careers in publishing was established in 2016[58] by 2022 it had 200 active apprenices in the UK in a wide range of roles.[59][60]

The press monitors its emissions annually, has converted to energy-saving equipment, minimizes plastic use and ensures that their paper is sourced ethically.[61]

In 2019, the World Wildlife Fund awarded its highest score to the press of Three Trees, based on the press's timber purchasing policy, performance statement and its responsible sourcing of timber.[62] The press works hard to minimise the number of books that are sent for pulping each year.[citation needed]

The press won the Independent Publishers Guild Independent Publishing Awards for sustainability in 2020 and in 2021.[63][64] Its public commitments to sustainability include being a signatory of the UN Global Compact[65] and to the goals of the Cambridge Zero initiative run by the University of Cambridge - to being carbon zero on all energy-related emissions by 2048.[66]

Wikisource has original works published by or about: Cambridge University Press

England
Retrieved from "http://en.turkcewiki.org/w/index.php?title=Cambridge_University_Press&oldid=1102841495"
This website is a mirror of Wikipedia, and is not affiliated with the Wikimedia Foundation.
Categories:
Hidden categories: