The line was originally constructed as 3 ft (914 mm) gauge in 1874, under the charter of the Chester & Lenoir.[3] The line was part of the subsequent reorganization into the Carolina & North-Western Railway in 1897, which was absorbed into the Southern Railway around 1940.[4] As part of the Thoroughbred Shortline Program, the line was spun off to the Carolina and Northwestern Railroad, which operated the line from 1990 to 1994.[5] 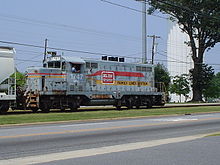 The railroad serves 5 customers, handling approximately 425 carloads (38,000 short tons or 34,500 metric tons or 33,900 long tons) per year.[2] Commodities carried by the railroad are plastics and building materials. The CWCY interchanges with Norfolk Southern at Hickory.

The Caldwell County Railroad operates 2 locomotives, numbers 1747 and 1811. Both units are EMD GP-16's and were purchased from CSX.[9] They are still in the Family Lines System livery.

Retrieved from "http://en.turkcewiki.org/w/index.php?title=Caldwell_County_Railroad&oldid=871546807"
This website is a mirror of Wikipedia, and is not affiliated with the Wikimedia Foundation.
Categories: