Burke County is a county located in the U.S. state of North Carolina. As of the 2020 census, the population was 87,570.[1] Its county seat is Morganton.[2] Burke County is part of the Hickory–Lenoir–Morganton, NC Metropolitan Statistical Area.

Indigenous peoples inhabited the interior as well as the coastal areas for thousands of years. Native Americans of the complex and far-flung Mississippian culture inhabited the county long before Europeans arrived in the New World. They were part of a trade network extending from the Gulf Coast to the Great Lakes. They built earthwork mounds, including at Joara, a 12-acre (49,000 m2) site and regional chiefdom in North Carolina. (Present-day Morganton developed near this site.) It was the center of the largest Native American settlement in North Carolina, dating from about 1000 AD and expanding into the next centuries.[3]

In 1567, the Spanish Juan Pardo expedition arrived and built Fort San Juan at Joara, claiming the area for the colony of Spanish Florida. Pardo renamed the settlement as Cuenca, after his home city.[3] They had been sent by the governor at Santa Elena (Parris Island) in South Carolina to find an overland route to the silver mines in central Mexico, believing that the Appalachians were connected to a range there.

Captain Juan Pardo, leader of the expedition, left about 30 soldiers at the fort while continuing his exploration. His expedition built another five forts to the west, in the foothills of the mountains. In the spring of 1568 the Indians attacked Fort San Juan, killing the soldiers and burning the fort. The natives would kill all soldiers except one at the garrisons, at five other Spanish forts in the interior.[3]

In 1777, during the American Revolutionary War, Burke County was formed from Rowan County. It was named for Thomas Burke, then serving as a delegate to the Continental Congress (1777 to 1781). He was later elected as Governor of North Carolina, serving one term from 1781 to 1782. The western Piedmont was settled by many Scots-Irish and German immigrants in the mid-to-late 18th century. They were generally yeoman farmers and fiercely independent.

The Burke County Regiment participated in the Battle of Kings Mountain, which pitted Appalachian frontiersmen against the Loyalist forces of the British commander Ferguson at Kings Mountain, SC in the American Revolution. Rather than waiting for Ferguson to invade their territory, militiamen throughout the Blue Ridge crossed over the mountains to meet the enemy and were known as the Over Mountain Men.[4]

It was not until the late 20th century that a record of the 1567 Spanish expedition was discovered and translated into English. In the 1990s, excavation was started at a site believed to be Joara, continuing into the 21st century. In 2013 archeologists announced that they had found remains of Fort San Juan at Joara, confirming early accounts. This has changed knowledge of and interpretation of early European encounters and colonization efforts in what would become the United States, as Spanish efforts preceded the successful efforts of England in Jamestown, Virginia by 40 years.[5] 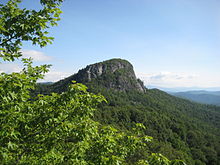 Table Rock, a prominent peak in the county in the east rim of Linville Gorge, part of Pisgah National Forest, has been described as "the most visible symbol in the region".[7]

In the southern part of the county, the South Mountains State Park covers almost 21,000 acres and features waterfalls and hiking trails.

Burke County leans heavily Republican in Presidential elections. The last Democrat to carry the county was Jimmy Carter in 1976. Lyndon Johnson, who won the county as a Democrat in 1964, was the only other one to do so since World War II. However, as late as the 1990s, Democratic presidential candidates have managed to garner 40 percent of the county's vote. As was typical for all of the South outside the Appalachian highlands and a few stronghold Republican counties, Burke County was mostly solidly Democratic before WWII.

Burke County is a member of the regional Western Piedmont Council of Governments. The county is governed by a five-member Board of Commissioners, elected to serve four-year terms.[18] 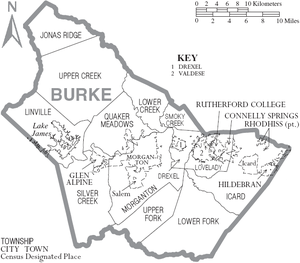 Although never explicitly mentioned by name in the novel, the hideout of Robur-the villain in Jules Verne's Master of the World-is thought to be Table Rock mountain in Burke County.

Many scenes from the 1992 film Last of the Mohicans were filmed in Burke County. A full-scale fort was built next to the Linville boat access on Lake James for the filming. The fort was later destroyed and the land replanted with trees. Many of the extras who played settlers, British soldiers, and Native Americans were locals from Burke and surrounding counties.

The final scene from The Hunt for Red October had the backdrop filmed on Lake James, while the actors stayed in Hollywood

In 2011, scenes for the Lionsgate adaptation of The Hunger Games were filmed near Hildebran, North Carolina at the Henry River Mill Village.

Retrieved from "http://en.turkcewiki.org/w/index.php?title=Burke_County,_North_Carolina&oldid=1134815658"
This website is a mirror of Wikipedia, and is not affiliated with the Wikimedia Foundation.
Categories:
Hidden categories: