Jump to navigation Jump to search
For other uses, see Bridle (disambiguation). 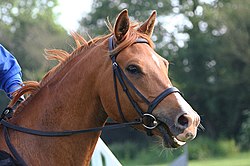 A bridle is a piece of equipment used to direct a horse. As defined in the Oxford English Dictionary, the "bridle" includes both the headstall that holds a bit that goes in the mouth of a horse, and the reins that are attached to the bit.

Headgear without a bit that uses a noseband to control a horse is called a hackamore, or, in some areas, a bitless bridle. There are many different designs with many different name variations, but all use a noseband that is designed to exert pressure on sensitive areas of the animal's face to provide direction and control. 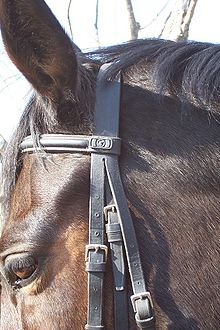 The crownpiece runs over the horse's poll, and the browband across the forehead. The cheekpieces run down the sides of the horse's face.

The bridle consists of the following elements:

On a double bridle, where the horse carries two bits (a curb and small snaffle, often called a "bit and bradoon"), a second, smaller headstall, known as a 'bradoon hanger' or ‘slip head’ is used to attach the bradoon. A second set of reins is attached to the bradoon, and hence the rider carries four reins.

The bridle, depending on style, may also contain some of the following elements: 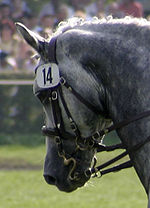 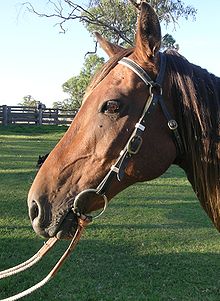 Barcoo (or ringhead) bridle as used across Australia

A one-ear or "slip-ear" style western bridle with curb bit, with added silver for show. 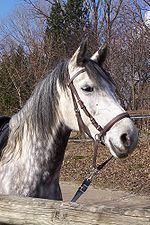 One type of cross-under bitless bridle. Reins are separate, though held closely together in this photo. (click to enlarge and view detail) A horse should not be tied with this bridle, as it may tighten on the nose if the horse sets back on the rope.

A hackamore, put simply, is headgear that controls a horse via pressure points on the face, usually with a nosepiece instead of a bit. A hackamore is not the same thing as a halter, as a halter is primarily used for leading and tying up an animal.[1] Bitless bridles are similar to hackamores, but some designs use different leverage principles for control. Hackamores and bitless bridles use a headstall with reins attached to some type of noseband or nosepiece. Various designs allow control and good communication to the horse and may, in some cases, be more comfortable to the horse, particularly a young animal or one with a mouth injury.

The jaquima or original bosal style hackamore is mostly seen on young horses being started under saddle in western riding disciplines. Bitless bridles and other types of hackamore are most often seen on horses used for endurance riding and trail riding. A design called the mechanical hackamore is sometimes seen at rodeos. Most horse show events do not allow bitless bridles of any kind. The exceptions are show jumping, where equipment rules are fairly generous, and in certain western horse show classes for "junior" horses, which permit use of bosal hackamore.

Besides the bosal hackamore, there are many other designs. A design that combines elements of the bosal hackamore is known as a sidepull, which acts mostly on the nose, and are popular with western riders and many trail riders. English riders sometimes use a jumping cavesson or "jumping hackamore" that is basically a leather sidepull noseband reinforced internally with a cable, with rein rings attached. The so-called mechanical hackamore or "hackamore bit" is basically a hybrid bridle/hackamore made up of a noseband with shanks and a curb strap or chain that can put considerable leverage on the jaw and poll.

Another design, called a bitless bridle is the "cross-under" or "figure eight" bridle. One common design connects the reins to a loop that passes from the noseband, under the jaw, and up around the poll, returning on the opposite side back under the jaw to the noseband and out to the other rein. This design directs pressure from one rein to the opposite side of the horse's head, or pressure on both reins to the whole head. Other designs only cross under the jaw and do not go over the poll.

Some riders, not realizing that a horse's head overall is a very sensitive area, use a noseband-based style of headgear without the same caution they might use with a bit, thus defeating any benefit that an apparently milder form of gear would otherwise provide. While many bitless designs are marketed as humane, and some are indeed quite mild, other designs can be remarkably harsh in the hands of a poor rider,[2] particularly if they are improperly adjusted or have metal parts, a thin design, or rough surfaces.

Bridles used for driving horses have some differences from most riding bridles. The most visible difference is that they usually include partial eye coverings called blinders, blinkers or winkers that restrict the horse's peripheral vision. They are stitched into the cheekpieces of a driving bridle and sometimes bear a monogram or badge. Winkers may be square, dee-shaped, hatchet-shaped, or round, and are adjusted to fit clear of the center of the horse's eye.

The noseband is fitted into the bridle so has a certain amount of action, and is not on a separate headstall (also called sliphead) as is a cavesson. Harness bridles may feature a fancy browband, rosettes, and other ornamentation. An overcheck or sidecheck are sometimes used to control a horse's head carriage and may be used in conjunction with an overcheck bit.

The Liverpool curb bit is most commonly used for carriage driving. The reins can be attached in any of the three slots along the shanks, resulting in a snaffle or curb action as required. Wilson snaffle bits are commonly used with trade turnouts. These bits have four rings so that the inner two rings may be attached to the cheek pieces and the outer pair to the reins. This arrangement is designed to prevent rein pressure interfering with the position of the winkers. Other styles of bits are used for harness racing, fine harness, and coach driving.

A bridle is individually fitted to a horse. Without properly fitting the bridle to the horses’ head, the horse may be uncomfortable, and poor fitting may also result in lack of control while riding or unclear communication.

The length of each piece of the bridle needs to be individually adjusted to fit the horse's head. Other parts of the bridle are adjustable in length, though there are limits to adjustment and thus many manufacturers offer two to six different basic sizes. The sizes may have different names, but in the USA and Canada they are often called "cob" and "horse" for small and large animals, sometimes with "pony", "mini", "warmblood" and "draft" sizes in some designs.

The bit and browband are of set lengths and must be selected in the correct size. A too-narrow bit is uncomfortable and cannot be widened. One that is slightly too wide can be narrowed to some extent by adding a pair of bit guards. A browband that is too short causes the browband or crownpiece to rub the ears. The cheekpieces are adjusted not only so that the bit avoids the extremes of pulling the corners of the horse's mouth or banging the horse's incisors, but also so it hangs properly in the mouth for the specific riding discipline and bit design involved . The adjustment of the noseband depends on the type used, but needs to be snug enough to be effective, yet loose enough to avoid discomfort. The throatlatch is adjusted each time the bridle is put on the horse, loose enough to not interfere as the horse flexes at the poll. A standard throatlatch measurement is that the width of three or four fingers should be able to fit between the throatlatch and the horses’ cheek.

Dangers of tying with a bridle[edit]

If a horse must be tied to an object, a halter should be placed under or over the bridle, and the cross-ties should be attached to halter rings rather than the bit

It is unsafe to tie a horse using a bridle for two main, seemingly contradictory, reasons. First, if the tied animal pulls back on the bridle, the bit or controlling noseband (such as a bosal or mechanical hackamore) may cause considerable pain or even injury to the mouth, tongue, or other facial structures of the animal even if the bridle breaks. Second, compared to halters, most bridles are made of thin leather which will easily break under pressure. The end result can be both injury to the horse and broken equipment. Should a rider need to tie a horse, best practice is to either remove the bridle and put on a halter, or to put a halter on in addition to the bridle (under or over the bridle), and tie the horse using the halter only. In addition, tying with a slipknot that can be released by pulling on the end of the lead rope is a key safety tactic.

In western riding, some horses are taught to "ground tie" with a bridle, that is, to stand still when the reins are dropped on the ground. This can only be done with split reins, as a horse can easily put a foot through a pair of reins that are attached to one another. Even with split reins, a horse can still step on a rein, jerk its head up and both break the rein and injure its mouth. Historically, it was a useful skill if a rider had to momentarily dismount and perform a task that required both hands (such as removing brush or fixing a fence) in a remote area where tying was impracticable. In actual practice, just as with the "stay" command used in obedience work for dogs, even well-trained horses may not stay "ground tied" for long, especially if left unsupervised. Thus, ground tying today is usually seen in specific classes at horse shows such as the trail horse class, or as a useful short-term command: many horses are taught to stand still for a limited period of time on a "whoa" or "stay" command, with or without dropping the reins.

Retrieved from "http://en.turkcewiki.org/w/index.php?title=Bridle&oldid=1045997694"
This website is a mirror of Wikipedia, and is not affiliated with the Wikimedia Foundation.
Categories:
Hidden categories: