Jump to content
Load-bearing beam in a timber-framed building 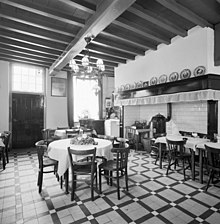 Look up bressummer in Wiktionary, the free dictionary.

A bressummer, breastsummer, summer beam (somier, sommier, sommer, somer, cross-somer, summer, summier,[1] summer-tree,[2] or dorman, dormant tree) is a load-bearing beam in a timber-framed building. The word summer derived from sumpter or French sommier, "a pack horse", meaning "bearing great burden or weight". "To support a superincumbent wall", "any beast of burden", and in this way is similar to a wall plate.

The use and definition of these terms vary but generally a bressummer is a jetty sill and a summer is an interior beam supporting ceiling joists, see below:

Retrieved from "http://en.turkcewiki.org/w/index.php?title=Bressummer&oldid=1123046945"
This website is a mirror of Wikipedia, and is not affiliated with the Wikimedia Foundation.
Categories:
Hidden categories: