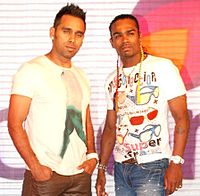 Bosco–Caesar is an Indian choreographer duo who work in Bollywood. They are Bosco Martis and Caesar Gonsalves, who have together worked on 200 songs and about 75 films.[1] They run the Bosco Caesar Dance Company in Brampton, Scarborough, Mumbai, Phoolbagan, and Salt Lake in Kolkata.[2]

Bosco Martis (born 27 November 1974)[5] and Caesar Gonsalves (born 23 February 1973)[6] grew up in Mumbai where they both went to St. Joseph's School in Juhu and played football together. Bosco was inspired by Caesar's dancing performances and practiced on his own to catch up with his future partner's abilities. The two attended Mithibai College and graduated in 1990.[5][6]

Bosco–Caesar started as backup dancer for choreographers LOLLYPOP and Farah Khan. Thereafter, they started their independent career as choreographers in 1994, when they choreographed a stage show for singers duo Shaan and Sagarika for an awards function. Next they choreographed a music video for singer Raageshwari's number "Oye Shava". During the filming of the video, ad film director Prahlad Kakkar happened to walk in and, in turn, asked them to choreograph a few TV commercials he was shooting with cricketer Sachin Tendulkar. Eventually this led to their feature film debut with Vidhu Vinod Chopra's Mission Kashmir in 2000.[1]

Bosco–Caesar announced that they would be officially parting ways while keeping the brand in tact in 2016, with Bosco making his directorial debut and Caesar organizing dance workshops.[7] The duo reuinited in 2019 to choreograph a song for Sajid Nadiadwala's Chhichhore.[8]

Retrieved from "http://en.turkcewiki.org/w/index.php?title=Bosco–Caesar&oldid=1033146373"
This website is a mirror of Wikipedia, and is not affiliated with the Wikimedia Foundation.
Categories:
Hidden categories: