The Blue Ridge Parkway is a National Parkway and All-American Road in the United States, noted for its scenic beauty. The parkway, which is America's longest linear park,[3] runs for 469 miles (755 km) through 29 Virginia and North Carolina counties, linking Shenandoah National Park to Great Smoky Mountains National Park. It runs mostly along the spine of the Blue Ridge, a major mountain chain that is part of the Appalachian Mountains. Its southern terminus is at U.S. Route 441 (US 441) on the boundary between Great Smoky Mountains National Park and the Qualla Boundary of the Eastern Band of Cherokee Indians in North Carolina, from which it travels north to Shenandoah National Park in Virginia. The roadway continues through Shenandoah as Skyline Drive, a similar scenic road which is managed by a different National Park Service unit. Both Skyline Drive and the Virginia portion of the Blue Ridge Parkway are part of Virginia State Route 48 (SR 48), though this designation is not signed.

The parkway has been the most visited unit of the National Park System every year since 1946 except four (1949, 2013, 2016 and 2019).[4][5] Land on either side of the road is owned and maintained by the National Park Service, and in many places parkway land is bordered by United States Forest Service property. There is no fee for using the parkway; however, commercial vehicles are prohibited without approval from the Park Service Headquarters, near Asheville, North Carolina.[6][7] The roadway is not maintained in the winter, and sections that pass over especially high elevations and through tunnels are often impassable and therefore closed from late fall through early spring. Weather is extremely variable in the mountains, so conditions and closures often change rapidly. The speed limit is never higher than 45 mph (72 km/h) and is lower in some sections.

In addition to the road, the parkway has a folk art center located at mile marker 382 and a visitor center located at mile marker 384, both near Asheville. There are also numerous parking areas at trailheads for the various hiking trails that intersect the parkway, and several campgrounds located along the parkway allow for overnight stays. The Blue Ridge Music Center (also part of the park) is located in Galax, and Mount Mitchell (the highest point in eastern North America) is only accessible via North Carolina Highway 128 (NC 128), which intersects the parkway at milepost 355.4.[8]

Schematic map of the Parkway 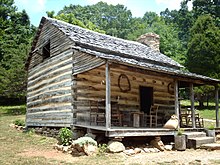 Farm at the Humpback Rock

The parkway runs from the southern terminus of Shenandoah National Park's Skyline Drive in Virginia at Rockfish Gap to U.S. Route 441 (US 441) at Oconaluftee in the Great Smoky Mountains National Park near Cherokee, North Carolina. In terms of design, the parkway is an undivided two-lane expressway for most of its route; access to the parkway is controlled via interchanges with local roads and state/US highways. It crosses (but does not interchange with) several interstate highways along its route and is carried across streams, railway ravines and cross roads by 168 bridges and six viaducts. Frequent pull-offs, rest areas, and scenic overlooks line the sides of the road. As it is rarely the fastest or most convenient route for travelers, and it avoids population centers, the road and its vistas is designed to be the attraction itself, rather than a merely a means of efficient travel. The use of interchanges and grade separation at cross roads is designed to allow for freer flowing traffic and better vistas than frequent intersections and stoplights would allow for.

The parkway uses short side roads to connect to other highways, and there are no direct interchanges with Interstate Highways,[a] making it possible to enjoy wildlife and other scenery without stopping for cross-traffic. Mileposts along the parkway start at zero at the northeast end in Virginia and count to 469 at the southern end in North Carolina. The mileposts can be found on the right-hand side of the road while traveling southbound on the parkway. Major towns and cities along the way include Waynesboro, Roanoke, and Galax in Virginia; and in North Carolina, Boone and Asheville, where it runs across the property of the Biltmore Estate. The Blue Ridge Parkway tunnels were constructed through the rock—one in Virginia and 25 in North Carolina.

Much of the parkway is located at high elevation, with colder, wetter and windier conditions than in surrounding areas.[9] The highest point on the parkway (south of Waynesville, near Mount Pisgah in North Carolina) is 6,053 feet (1,845 m) above sea level on Richland Balsam at milepost 431.[10] Sections of the parkway may be temporarily closed to repair damage caused by the cold winter climate of the mountains or for other maintenance.[9] The parkway's natural resource protection protocol limits the use of ice melting chemicals, and certain areas could remain closed for extended periods.[11] During road closures alternative routes are used, but short-term closures may not have a signed detour route.[12] Sections of the parkway near the tunnels are often closed in winter due to icy conditions.[13]

The view from Craggy Gardens on the Blue Ridge Parkway 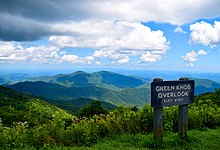 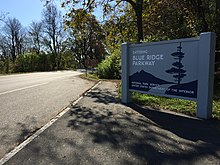 View south at the north end of the parkway at Rockfish Gap, Virginia

Begun during the administration of President Franklin D. Roosevelt, the project was originally called the Appalachian Scenic Highway.

Original plans called for the highway to connect Shenandoah National Park and Great Smoky Mountains National Park with the highway either turning west into Tennessee at Linville, North Carolina, or continuing southward through North Carolina. According to Super-scenic Motorway: A Blue Ridge Parkway History by Anne Mitchell Whisnant, the Tennessee route was recommended. However, Roosevelt had remained friends with Josephus Daniels, Roosevelt's superior as Secretary of the Navy during World War I. Daniels wanted the highway to go through North Carolina and persuaded Secretary of the Interior Harold L. Ickes to choose the North Carolina route.[15] The Bruce Bowers documentary The Blue Ridge Parkway: The Long and Winding Road gives Congressman Robert Doughton the credit for getting the route changed. The documentary claims Doughton worked to pass the Social Security Act only after getting the route changed.[16]

Most construction was carried out by private contractors under federal contracts under an authorization by Ickes in his role as federal public works administrator. Work began on September 11, 1935, near Cumberland Knob in North Carolina; construction in Virginia began the following February. On June 30, 1936, Congress formally authorized the project as the Blue Ridge Parkway and placed it under the jurisdiction of the National Park Service. Some work was carried out by various New Deal public works agencies. The Works Progress Administration did some roadway construction. Crews from the Emergency Relief Administration carried out landscape work and development of parkway recreation areas. Personnel from four Civilian Conservation Corps camps worked on roadside cleanup, roadside plantings, grading slopes, and improving adjacent fields and forest lands. During World War II, the CCC crews were replaced by conscientious objectors in the Civilian Public Service program.

The parkway's construction created jobs in the region, but also displaced many residents and created new rules and regulations for landowners, including requirements related to how farmers could transport crops.[17] Residents could no longer build on their lands without permission, or develop land except for agricultural use.[17] They were not permitted to use the parkway for any commercial travel but were required to transport equipment and materials on side roads.[17]

The Eastern Band of Cherokee Indians were also affected by the parkway, which was built through their lands.[18] From 1935 to 1940, they resisted giving up the right-of-way through the Qualla Boundary, and they were successful in gaining more favorable terms from the U.S. government.[18] Specifically, the revised bill "specified the parkway route, assured the $40,000 payment for the tribe's land, and required the state to build [a] regular highway through the Soco Valley". (The highway referred to is part of U.S. Route 19.)[18] Cherokee leaders participated in the dedications when the Cherokee sections opened in the 1950s.

Construction of the parkway was complete by the end of 1966 with one notable exception.[19] The 7.7-mile (12.4 km) stretch including the Linn Cove Viaduct around Grandfather Mountain did not open until 1987.[20] The project took over 52 years to complete.

The parkway was on North Carolina's version of the America the Beautiful quarter in 2015.[21]

An extension of the parkway from its terminus at Beech Gap, North Carolina to a point north of Atlanta, Georgia, was proposed in 1961 by North Carolina Congressman Roy A. Taylor. The route was proposed to pass Whiteside Mountain, Bridal Veil Falls, Cuilasaja Gorge, and Estatoah Falls, ending between Atlanta and Gainesville, Georgia after crossing the Chattahoochee River and passing to the east of Lake Sidney Lanier. By 1963 the National Park Service had proposed a terminus at Interstate 75 north of Marietta, Georgia, in the vicinity of Kennesaw Mountain National Battlefield Park.[22] President Lyndon B. Johnson signed a bill to extend the parkway in 1967. A five-year schedule was proposed, with a budget of $87,536,000 (equivalent to $529 million in 2020[23]). In 1970 planning was interrupted by the projected commercial development of land in the proposed path. Increasing costs associated with rerouting and the passage of time coincided with efforts to cut national debt and concerns about the project's environmental impact, and the project stalled in 1973. The project was formally cancelled on September 11, 1985; no construction work had ever taken place.[24][25]

Flowering shrubs and wildflowers dominate the parkway in the spring, including rhododendrons and dogwoods, moving from valleys to mountains as the cold weather retreats. Smaller annuals and perennials such as the daisy and aster flower through the summer. Brilliant autumn foliage occurs later in September on the mountaintops, descending to the valleys by later in October.[26] Often in early-to-middle October and middle to late April, all three seasons can be seen simply by looking down from the cold and windy parkway to the green and warm valleys below. October is especially dramatic, as the colored leaves stand out boldly and occur mostly at the same time, unlike the flowers.

Major trees include oak, hickory, and tulip tree at lower elevations and buckeye and ash in the middle, turning into conifers such as fir and spruce at the highest elevations on the parkway. Trees near ridges, peaks, and passes (often called gaps or notches) are often distorted and even contorted by the wind, and persistent rime ice is deposited by passing clouds in the winter.

The Blue Ridge Parkway has also been a corridor for the spread of many invasive species, including oriental bittersweet, privet, and multiflora rose.[27]

There are 26 tunnels constructed along the Blue Ridge Parkway. One, the Bluff Mountain Tunnel,[30] is in Virginia and twenty-five are in North Carolina.[31]

The design standards specified a minimum impact on the land. The vehicle tunnels were often constructed to reduce excessive landscape scarring that open cuts would have produced. They are used in areas of steep terrain where ridges run perpendicular to the roadway alignment.

North Carolina's more rugged terrain required the majority of the tunnels. Most of the work on the tunnel digging was done by hand and provided by the Civilian Conservation Corps in the 1930s.[32] Little machinery was used with the intention of creating manual labor in depressed economic times. They did have for tunneling truck-mounted water-cooled compressed air drills called "Jumbos." After the initial holes were drilled into the substrata, dynamite was used for blasting away the rock.[33]

Concrete lining was done during construction due to tunnel cave-ins.[34] This concrete lining was first used in the Devil's Courthouse Tunnel. It was later discovered that it enhanced the interior lighting within the tunnel itself. Where done the lining covered about a quarter of the interior structure. An additional benefit was the elimination of moisture entering the tunnel. Moisture in the winter caused ice problems.[35]

The distinctive stone masonry portals now on the parkway tunnels were generally not part of the original construction of the 1930s. They were added later.[36]

The tunnels are listed below by milepost, name, and length.[37] The maximum height is in the center of the tunnel and the minimum height is at the edge stripe.

Retrieved from "http://en.turkcewiki.org/w/index.php?title=Blue_Ridge_Parkway&oldid=1119267031"
This website is a mirror of Wikipedia, and is not affiliated with the Wikimedia Foundation.
Categories:
Hidden categories: