Jump to navigation Jump to search
Final public speech of Barack Obama as US President
President Barack Obama delivers his farewell address to the nation in Chicago.

Barack Obama's farewell address was the final public speech of Barack Obama as the 44th President of the United States, delivered on January 10, 2017 at 9:00 p.m. EST.[1][2] The farewell address was broadcast on various television and radio stations and livestreamed online by the White House. An estimated 24 million people watched the address live on television.[3] The speech and its transcript are available on the archived version of the Obama White House website.[1]

Obama served as the first African American President of the United States for two terms, first elected in 2008 and reelected in 2012. During his presidency, his administration addressed the 2007-2008 global financial crisis (including a major stimulus package), oversaw the passage and implementation of the Patient Protection and Affordable Care Act, partially extended Bush tax cuts, took executive action on immigration reform, and took steps to combat climate change and carbon emissions. Obama also authorized the raid that killed Osama bin Laden, signed the New START treaty with Russia, signed the Paris Agreement, and negotiated rapprochements with Iran and Cuba. Democrats controlled both houses of Congress until Republicans won a majority in the House of Representatives in the 2010 elections. Republicans took control of the Senate after the 2014 elections, and Obama continued to grapple with Congressional Republicans over government spending, immigration, judicial nominations, and other issues.

In the 2016 presidential election, Obama was ineligible to seek reelection to a third term due to the restrictions of the Twenty-second Amendment. In June 2016, Obama endorsed his former Secretary of State, Hillary Clinton, to succeed him as president.[4] He addressed the 2016 Democratic National Convention on July 27 in support of Clinton as the Democratic Party's nominee,[5] and continued to campaign for her throughout the 2016 general election campaign season.[6] However, Hillary Clinton would unexpectedly lose the general election to Republican nominee Donald Trump on November 8, after failing to receive enough votes in the Electoral College, despite receiving a plurality of the national popular vote. The Democratic Party would no longer control the presidency once Trump was inaugurated on January 20, 2017, and they did not have a majority of seats in either chamber of the United States Congress, and in the state legislatures and governorships. President Obama's approval ratings were nearly at 60 percent at the time of his farewell speech.[7][8][9]

In a break with recent tradition, President Obama did not deliver his farewell address at the White House.[10] Instead, he gave the speech at the McCormick Place convention center in his home city of Chicago, less than four miles from Grant Park, where he delivered his 2008 election victory speech.[11] McCormick Place is also the same venue where Obama delivered his 2012 reelection victory speech.[12]

The event was open to the public, with free tickets being distributed on a first-come, first-served basis on January 7.[2] 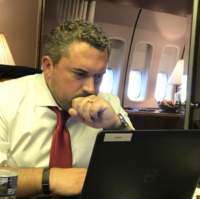 On January 2, 2017, President Obama released a post on the White House blog publicly announcing that he would deliver his farewell address in his hometown of Chicago, and stated that he was "just beginning" to write his remarks and that he was "thinking about them as a chance to say thank you for this amazing journey, to celebrate the ways you've changed this country for the better these past eight years, and to offer some thoughts on where we all go from here."[13]

In the January 6 press briefing, White House Press Secretary Josh Earnest said that "the President is interested in delivering a farewell address that's forward-looking"[14] and on January 9 he stated that "there's still a lot of work that needs to be done on the speech. So the President will be doing a lot of thinking between now and then, between now and 9:00 p.m. Eastern tomorrow, thinking about what he wants to say and what sort of presentation he wants to make to the American public as he enters the last couple of weeks that he has here at the White House."[15]

The farewell address was written by President Obama, who dictated passages to Cody Keenan, the White House Director of Speechwriting. The President and Keenan went through at least four drafts of the speech. Former White House speechwriter Jon Favreau and former senior advisor David Axelrod also contributed to the drafting process.[16]

During the speech, Obama referred to advancements made during his presidency, such as reversing the Great Recession, creating many new jobs, shutting down Iran's nuclear weapons programme and achieving marriage equality. Obama suggested one who is frustrated with elected officials in their state should run for office themselves. Additionally, he elaborated upon the first lady Michelle Obama and his daughters values to himself and the nation. At the denouement, Obama restated the slogan from his initial 2008 presidential campaign once more: "Yes we can. Yes we did, yes we can. Thank you, God bless you. May God continue to bless the United States of America. Thank you."

Retrieved from "http://en.turkcewiki.org/w/index.php?title=Barack_Obama%27s_farewell_address&oldid=1101586727"
This website is a mirror of Wikipedia, and is not affiliated with the Wikimedia Foundation.
Categories:
Hidden categories: