Map of the railway cutting with discovery sites

The archaeological site of Atapuerca is located in the province of Burgos in the north of Spain and is notable for its evidence of early human occupation. It was designated a World Heritage Site in 2000.

The archaeological significance of this part of the province of Burgos became increasingly apparent in the 20th century as the result of the construction of a metre-gauge railway (now disused) through the Atapuerca Mountains. Deep cuttings were made through the karst geology exposing rocks and sediments of features known as Gran Dolina, Galería Elefante and Sima de los Huesos. The subsequent excavation of 1964 under the direction of Francisco Jordá Cerdá succeeded with the discovery of anthropogenic artifacts and human fossils from a broad time range (early humans, hunter-gatherer groups, Bronze Age occupants). Further excavations followed, and interdisciplinary work has been undertaken by several teams, led by Emiliano Aguirre from 1978 to 1990 and later jointly by Eudald Carbonell, José María Bermúdez de Castro and Juan Luis Arsuaga. These have confirmed the continuous human occupation of the site. In July 2020 two quartzite stones were discovered, dating to 600,000 years ago,[1] a find which filled in a gap in the evidence for human occupation of the site over a timeline of 1,200,000 years.[2]

The site was designated a UNESCO World Heritage Site, under the name, Archaeological Site of Atapuerca.[3][4] The site is also protected at national level (as a Zona Arqueológica, a category of Bien de Interés Cultural on the heritage register) and at regional level (Castile and León has designated the Sierra de Atapuerca an Espacio cultural).

Location of the excavation sites in the railway cutting. Identifiable from the protective roofs are: (1) Entrance to the cutting; (2) Sima del Elefante; (3) Galería; (4) Gran Dolina

The regional designation of Espacio cultural is intended to allow sustainable tourism in the local villages.[5] There is a Site Access Centre (CAYAC) in Ibeas de Juarros.[6] There is also an Experimental Archaeology Centre (CAREX) in the village of Atapuerca. Finds are shown at the Museum of Human Evolution in the city of Burgos. 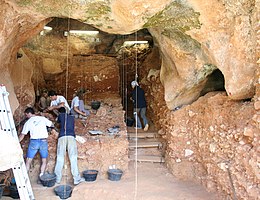 Trinchera Zarpazos, part of the Galería system, in 2006 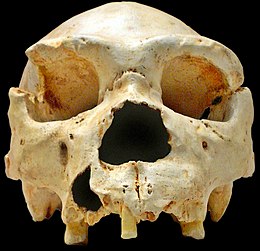 The Homo heidelbergensis Cranium 5, one of the most important discoveries; its nearly complete mandible was only found years later

The combined work of archaeologists Jesús Carballo (1910 to 1911), Geoffrey Clark (1971), José María Apellániz (1973 to 1983) and the current team of Juan Luis Arsuaga accounts for the documentation of the excavation sequence of ceramic objects from all relevant sediment layers since the Neolithic.

The Galería de la Eduarda y el Kolora is a local cave that contains parietal rock paintings, only discovered in 1972 by a group of local speleologists.

Among numerous faunal and floral fossils, a jaw fragment was found during the 1970s and a skull fragment in 1995, which both belong to Homo heidelbergensis. They date to between 600,000 and 400,000 years BP.

The Gran Dolina (also Trinchera Dolina, English: Dolina trench) site is a huge cavern, which has been excavated since September 1981. Its sediments were divided into eleven stratae (TD-1 to TD-11)

Sima de los Huesos (Pit of Bones) accounts for the greatest number of valuable scientific discoveries and knowledge acquired with far-reaching implications. This site is located at the bottom of a 13 m (43 ft) deep shaft, or "chimney", accessible via the narrow corridors of the Cueva Mayor.[7]

Since 1997, the excavators have located more than 5,500 human skeletal remains deposited during the Middle Pleistocene period, at least 350,000 years old, which represent 28 individuals of Homo heidelbergensis (also classified as early Neanderthals).[8][9][10][11] Associated finds include Ursus deningeri fossils and a hand axe called Excalibur. It has received a surprisingly high degree of attention, and a number of experts support the hypothesis that this particular Acheulean tool made of red quartzite seems to have served as a ritual offering, most likely for a funeral. The idea sparked a renewal of the disputed evolutionary progress and the stages of human cognitive, intellectual and conceptual development.[12] Ninety percent of the known Homo heidelbergensis fossil record have been obtained at the site. The fossil bone pit includes:

Some excavators have stated that the concentration of bones in the pit allows the suggestion of a traditional burial culture among the cave's inhabitants. A competing theory cites the lack of small bones in the assemblage and suggests that the fossils were washed into the pit by non-human agents.

According to José María Bermúdez de Castro, co-director of research at Atapuerca, the Sima del Elefante findings support "anatomical evidence of the hominids that fabricated tools more than one million years ago", which may have been the earliest among Western European hominids. The first discovery in June 2007 was a tooth,[17] followed by a fragment of a 1.2 million-year-old jawbone (mandible) and a proximal phalanx in 2008.[18][19] In July 2022, archaeologists announced the discovery of a 1.4 million-year-old jawbone (maxilla) included a tooth of a hominid. According to paleoanthropologists, a recently found maxilla may have come from Homo antecessor, an early species of human. It located about 2 meters deeper in the soil than the fossils found in 2008.[20][21]

This site provides information on the earliest local farmers and herders of the late Neolithic and Bronze Age.

Stone tools of the Upper Paleolithic have been extracted from this locality.

Wikimedia Commons has media related to Archaeological Site of Atapuerca.
Retrieved from "http://en.turkcewiki.org/w/index.php?title=Archaeological_site_of_Atapuerca&oldid=1126145661"
This website is a mirror of Wikipedia, and is not affiliated with the Wikimedia Foundation.
Categories:
Hidden categories: