She was born Antoinette Prudence Van Hoesen in Cortland County, New York; her parents were John Van Hoesen and Marian (Adams) Van Hoesen.[1][2] The Van Hoesens were originally a Dutch family; her paternal grandfather Garret Van Hoesen secured a land grant near what is now Hudson from King George III of Great Britain.[1] Her mother died before her first birthday and her father moved the family to Minnesota.[1] Around the age of 10, she was sent to boarding schools in Illinois, first in Evanston and later in Aurora.[1]

In 1870, she married Edgar Lewis Wakeman; they settled in Chicago and had a son, John.[1] 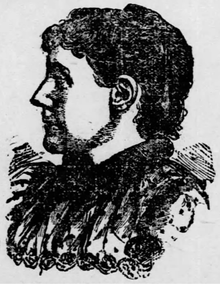 While visiting her brother F. B. Van Hoesen, then a Minnesota State Senator, she met F. A. Carle, editor of the St. Paul Pioneer-Press, who encouraged her to contribute letters to his paper.[1] Later she became a paid contributor to other periodicals across the country, including the Chautauquan, the New York Sun, and House Beautiful.[1]

Wakeman founded the Journal of Industrial Education in the late 1880s, serving as its publisher and editor for several years.[1][3] She also founded a fashion magazine in New York at the invitation of a company that sold clothing patterns.[1] She found this job uncongenial and resigned, returning to Chicago.[1]

Wakeman wrote on a variety of subjects relevant to women readers of her day, ranging from industrial education to dressmaking to women as stock farmers. Although she preferred newspaper work to other kinds of writing, she published poems and a play as well.[1][3]

Wakeman was a member of the Chicago Woman's Club and one of the founders of the Illinois Women's Press Association.[1][3]

She was struck by an automobile in New York on November 15, 1921, and died from her injuries at Bellevue Hospital on December 8.[4]

Retrieved from "http://en.turkcewiki.org/w/index.php?title=Antoinette_Van_Hoesen_Wakeman&oldid=1072684814"
This website is a mirror of Wikipedia, and is not affiliated with the Wikimedia Foundation.
Categories:
Hidden categories: