Anita Ratnam (born 21 May 1954) is an Indian classical and contemporary dancer and choreographer. Classically trained in Bharat Natyam, she has also received formal training in Kathakali, Mohiniattam, and T'ai chi and Kalarippayattu, thus creating a dance style which she has coined "Neo Bharat Natyam".[1][2][3]

She is the founder-director of Arangham Trust, set up in 1992 in Chennai. She also founded Arangham Dance Theatre, a performance company in 1993 and in 2000 she created Narthaki.com, an Indian dance portal. Over the years, she has received numerous awards and recognition for her work in the performing arts in India and abroad as a choreographer, scholar and cultural activist.[4][5]

Narthaki.com is a dance web portal founded by Dr. Anita R. Ratnam. In 1992 (with a second printed edition in 1997), it started as a phone book with 2000 addresses, when no such data base existed, not even the government had one. It was launched on the internet in April 2000. It has been described as India's first dance portal, and also its largest, and a forum for performing artists and connoisseurs of the arts. The portal publishes Reviews, Previews, Interviews, Profiles, Articles, research articles, special columns by noted scholars, health column, snippets of dance information that is used by researchers, details of programmes, contacts of performers, dance institutions, dance musicians, dance festivals, dance spaces etc, quotes, flash news, obits and a much awaited monthly newsletter.

Anitha Rathnam had her initial dance training under Bharatanatyam guru, Adyar K. Lakshman[6] and later went to Rukmini Devi Arundale's 'Kalakshetra' for advanced training and earned a Post graduate diploma in Dance. She trained in Bharatanatyam as well as Kathakali and Mohiniattam, the classical dances of Kerala.[7] 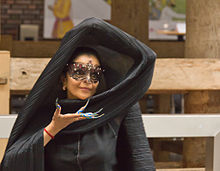 Anita Ratnam, Festival "Ramayana in Performance" in the Rautenstrauch-Joest-Museum, Cologne, 2012

She did her MA in Theatre and Television from the University of New Orleans, and spent the next ten years as a Television Producer/commentator in the United States with productions including a weekly series on art, travel and culture in India. She set up Arangham Trust, set up in 1992 in Chennai, followed by Arangham Dance Theatre, a performance company in 1993.[8][9]

A modernist, passionately convinced about creating from her immediate environment, Ratnam has explored various streams of movement and ritual traditions connected with her initial training in classical Bharatanatyam.

Quoting about her inspiration and her works, she says:

"I am in dance because this is my own way of connecting with myself and the world. I consider myself a contemporary classicist.[9]

All my ideas are from traditional sources, but they can also be from readings and from nature: a lotus flower floating in a small brass vessel, a child blowing soap bubbles, even a piece of paper flying in the wind gives me inspiration.

The whole world of ideas and a host of people and their mannerisms can all be suggested by a flicker of an eyelid, a flourish of the hand and the attitude of the body. The ideas come from many sources but I use them and put them together in my own style of dance, movement and theatre techniques.

When people see my work, they can tell that it is Indian in spirit but very contemporary in approach. Folk dancers and drummers who dance every evening after a hard day's work in the fields, traditional temple performers whose lives depend upon serving GOD during important festivals, actors who fuse movement with voice culture, young performers and students all over the world who want to learn new movement and the dynamics of cultural memories embedded into our South Asian bloodstream – these are the artistes who are the focus of my work.

I call myself a cultural activist because I believe in my culture. My culture doesn't mean just the performing arts. To me it stands for finding out about my roots and knowing who I am. And the classical arts are a very vital part of our culture.".[4]

In 2007, she performed her solo operatic performance "7 Graces" at Joyce SoHo, New York in collaboration with Hari Krishnan, a Canada-based dancer-choreographer.[10]

She has also appeared in some Tamil movies over the years, such as Kandukondain Kandukondain (2000) and Boys (2003).

Anita Ratnam has received several awards and recognition for her work in the performing arts in India and abroad. Some of them are:

Retrieved from "http://en.turkcewiki.org/w/index.php?title=Anita_Ratnam&oldid=1051630395"
This website is a mirror of Wikipedia, and is not affiliated with the Wikimedia Foundation.
Categories:
Hidden categories: