Jump to navigation Jump to search
Model for asssessing likelihood of bankruptcy
For the concept of standard score in statistics, often called the z-score, see Standard score. 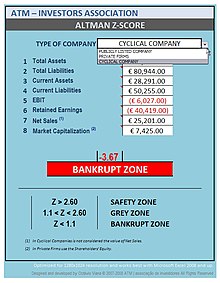 The Z-score formula for predicting bankruptcy was published in 1968 by Edward I. Altman, who was, at the time, an Assistant Professor of Finance at New York University. The formula may be used to predict the probability that a firm will go into bankruptcy within two years. Z-scores are used to predict corporate defaults and an easy-to-calculate control measure for the financial distress status of companies in academic studies. The Z-score uses multiple corporate income and balance sheet values to measure the financial health of a company.

The Z-score is a linear combination of four or five common business ratios, weighted by coefficients. The coefficients were estimated by identifying a set of firms which had declared bankruptcy and then collecting a matched sample of firms which had survived, with matching by industry and approximate size (assets).

The original data sample consisted of 66 firms, half of which had filed for bankruptcy under Chapter 7. All businesses in the database were manufacturers, and small firms with assets of < $1 million were eliminated.

The original Z-score formula was as follows:[1]

X1 = working capital / total assets. Measures liquid assets in relation to the size of the company.

Altman's work built upon research by accounting researcher William Beaver and others. In the 1930s and on, Mervyn[who?] and others[who?] had collected matched samples and assessed that various accounting ratios appeared to be valuable in predicting bankruptcy.[citation needed] Altman Z-score is a customized version of the discriminant analysis technique of R. A. Fisher (1936).

William Beaver's work, published in 1966 and 1968, was the first to apply a statistical method, t-tests to predict bankruptcy for a pair-matched sample of firms. Beaver applied this method to evaluate the importance of each of several accounting ratios based on univariate analysis, using each accounting ratio one at a time. Altman's primary improvement was to apply a statistical method, discriminant analysis, which could take into account multiple variables simultaneously.

This overstates the predictive ability of the Altman Z-score, however. Scholars have long criticized the Altman Z-score for being “largely descriptive statements devoid of predictive content ... Altman demonstrates that failed and non-failed firms have dissimilar ratios, not that ratios have predictive power. But the crucial problem is to make an inference in the reverse direction, i.e., from ratios to failures.”[3] From about 1985 onwards, the Z-scores gained wide acceptance by auditors, management accountants, courts, and database systems used for loan evaluation (Eidleman). The formula's approach has been used in a variety of contexts and countries, although it was designed originally for publicly held manufacturing companies with assets of more than $1 million. Later variations by Altman were designed to be applicable to privately held companies (the Altman Z'-score) and non-manufacturing companies (the Altman Z"-score).

Modern academic default and bankruptcy prediction models rely heavily on market-based data rather than the accounting ratios predominant in the Altman Z-score.[4]

The Use of Credit Scoring Modules and the Importance of a Credit Culture by Dr. Edward I Altman, Stern School of Business, New York University.

Retrieved from "http://en.turkcewiki.org/w/index.php?title=Altman_Z-score&oldid=997712438"
This website is a mirror of Wikipedia, and is not affiliated with the Wikimedia Foundation.
Categories:
Hidden categories: