Alexander County is a county established in the U.S. state of North Carolina in 1847. As of the 2010 census, the population was 37,198.[2] Its county seat is Taylorsville.[3][4] Alexander County is part of the Hickory–Lenoir–Morganton, NC Metropolitan Statistical Area. 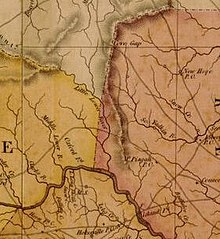 Area of North Carolina in 1833 that would become Alexander County in 1847, showing portions of Wilkes, Iredell and Surry counties 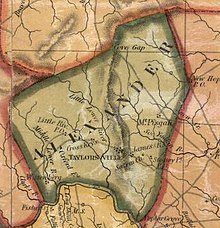 Alexander County was established by two acts of the North Carolina General Assembly, one ratified on January 15 and one ratified on January 18, 1847. These acts were not to take effect until it was determined that Caldwell County would have 5,000 people in it. On August 10–11, 1847, the first sale of land in the county seat (Taylorsville) took place. Taylorsville is the namesake of either John Louis Taylor, Carolina agriculturist and political philosopher, or General Zachary Taylor, the twelfth president of the United States. With the proceeds from the sale, the county built the first courthouse on the present site.[7]

When the American Civil War began, Alexander County was fourteen years old. The 1860 population was 5,837; yet Alexander County ranked high per capita in the number of Confederate soldiers it sent to the war.[citation needed] The court house records in Taylorsville were destroyed by troops under Major General George Stoneman in a raid on Easter Sunday in 1865.[8]

Alexander County is located within the Foothills region of western North Carolina. The county's main geographic feature is the Brushy Mountains, a deeply eroded spur of the Blue Ridge Mountains to the west. The "Brushies," as they are called locally, rise from 300 to 1,000 feet (300 m) above the surrounding countryside, and dominate the county's northern horizon. The highest point in Alexander County is Hickory Knob in the Brushies; it has an elevation of 2,560 feet (780 m) above sea level. Barrett Mountain, an isolated mountain ridge, is in the western part of the county. The remainder of Alexander County's terrain consists of gently rolling countryside. The county's largest river, the Catawba, forms its southern border.

Within Alexander County is the unincorporated town of Hiddenite, the location of a mine that yields emeralds, sapphires, and its namesake stone "hiddenite," a variety of spodumene.

The county is served by US Highway 64, a controlled-access roadway connecting Taylorsville with Lenoir and Statesville. NC Highways 90, 16, and 127 also serve the county. Interstate 40 and 77 are 30 minutes from the majority of county residents. The Charlotte Douglas International Airport is an hour's drive from most parts of the county. The area is also served by the Hickory Regional Airport (30 minutes) and the Statesville Airport (20 minutes). The Alexander Railroad Company is an active short-line rail system operating between Taylorsville and Statesville, and connecting with Norfolk Southern. 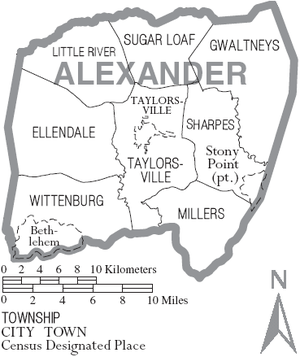 By the requirements of the North Carolina Constitution of 1868, counties were divided into non-functioning county subdivisions called townships. There are eight townships in Alexander County:[16][17]

Unincorporated communities in Alexander County include:[17]

Historical post offices that were part of Alexander County include:[17] 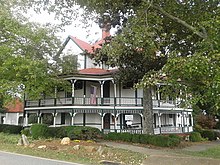 The population of cities, towns, and Census Designated Places (CDP) is shown in the following table is based on the 2010 census of Alexander County.[20]

Alexander is currently a powerfully Republican county in Presidential elections. The only Democrat to carry the county in the past nineteen Presidential contests has been Jimmy Carter in 1976, although Barry Goldwater won the county by a mere thirty-eight votes in 1964. In contrast, Hillary Clinton in 2016 obtained barely twenty percent of the county's vote. The county did vote mainly Democratic during the Third Party System, but Populist sentiments in the 1890s have meant the county has supported that party only five times since 1896.[citation needed]

Alexander County is a member of the regional Western Piedmont Council of Governments.

The county is served by one railroad, the Alexander Railroad Company.

Retrieved from "http://en.turkcewiki.org/w/index.php?title=Alexander_County,_North_Carolina&oldid=1045678871"
This website is a mirror of Wikipedia, and is not affiliated with the Wikimedia Foundation.
Categories:
Hidden categories: