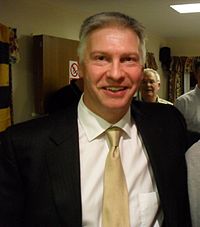 Adam Pearson (born 19 November 1964) is the owner of Hull F.C. rugby league club, and former Executive Director of Leeds United. He is the former chairman of English association football club Derby County, Chairman (2001-7 & 2009–10) and Head of Football Operations (2010–12) at Hull City and a former member of the Sheffield Wednesday footballing committee.

Born in Harrogate, Yorkshire,[1] Pearson left his position as Leeds United's commercial director in 2001 to purchase Hull City and take over as chairman.[2] At the time, Leeds were one of the country's most ambitious, big-spending Premier League clubs, while Hull were in administration and languishing at the bottom end of the Third Division of the Football League. But by the time Pearson left Hull in 2007, he had seen Hull promoted twice, moving up to the Championship.

Pearson was also Head of the Stadium Management Company, which operates the KCOM Stadium, the home of Hull City and rugby league side Hull F.C. But on 11 June 2007 at 12:00 midday, it was announced at a press conference broadcast live on BBC Radio Humberside that Pearson had sold the club and the SMC to a consortium consisting of Paul Duffen, Russell Bartlett and Martin Walker. It was confirmed that Paul Duffen would take over as Chairman, but Pearson would remain on the board of directors to provide continuity.[3] However, on 31 July 2007 he resigned from the board, thus severing all ties with the club.[4]

Pearson had been linked with a bid for Leeds, following the club being put up for sale.[5] Though he did not bid, he indicated that he did want to own a football club again.[4] In October 2007 he tabled a takeover bid worth more than £3 million for Huddersfield Town, the club he had supported all his life, but it was rejected.[6]

Following Hull City's relegation from the Premier League in May 2010, amid widespread speculation regarding the financial viability of the club, there was once again restructuring in the boardroom, with Adam Pearson stepping down from the role of Chairman to become Head of Football Operations, being succeeded as chairman by vice-chairman and club owner Russell Bartlett.[10]

It was announced on 22 July 2011 that Pearson had purchased the full shareholding of Hull F.C. rugby league club for an undisclosed price.[11]

On 1 May 2012, in a statement by Hull City owners Assem and Ehab Allam, it was confirmed that a consultancy agreement with Pearson had been terminated.[12]

In April 2015 he joined Sheffield Wednesday, together with Glenn Roeder, to work alongside Stuart Gray.[13]

In May 2015, he joined Leeds United as executive director to work alongside Massimo Cellino, only one month after joining Sheffield Wednesday.[14] On 14 May 2015, Cellino carried out a press conference unveiling Pearson as the club's Executive Director to work directly alongside Cellino. The press conference included Cellino leaving halfway through for a cigarette break only to return, and for the press conference to run for over an hour. Cellino revealed that he would also sell the club if Leeds failed to gain promotion within the next two seasons.[15]

Retrieved from "http://en.turkcewiki.org/w/index.php?title=Adam_Pearson_(sports_executive)&oldid=1058542045"
This website is a mirror of Wikipedia, and is not affiliated with the Wikimedia Foundation.
Categories:
Hidden categories: