A Second Chance at Sarah is a fantasy graphic novel written by Neil Druckmann, with illustrations by Joysuke Wong. The novel was originally published by Ape Entertainment on February 24, 2010; Dark Horse Comics re-released the novel on August 20, 2014. The book follows Johnny, who makes a deal with a demon to go back in time and save his dying wife, who fell into a coma upon the birth of their son.

Druckmann wrote the story in his spare time while working at the video game developer Naughty Dog. He considers A Second Chance at Sarah to be a personal story, focusing on the characters instead of the supernatural elements. Druckmann worked on several unsuccessful comic book ideas and pitches, before collaborating with Wong on A Second Chance at Sarah. Wong's work on the book was extensive, as she refined and extended Druckmann's initial concepts and ideas. The two worked on the book for over a year. The book received generally positive reviews from critics, who particularly praised Wong's illustrations, Druckmann's writing, and the character development. 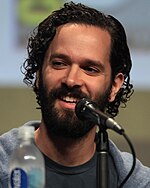 A Second Chance at Sarah was conceived and written by Neil Druckmann, who collaborated with artist Joysuke Wong.

Prior to working on A Second Chance at Sarah, writer Neil Druckmann developed a different comic book pitch for over a year, writing, drawing and lettering in full detail. When the pitch was rejected, he decided to work with an artist to finish a new pitch in a shorter time.[1] He contacted artist Joysuke Wong, who agreed to collaborate; Druckmann called the collaboration the "easiest decision" he made while working on the comic,[1] as he was very impressed by her artwork.[2] In collaboration with each other, Druckmann and Wong developed the pitch—the first six pages of the story—in about two months. They worked on the comic for over a year prior to completion.[1] Druckmann created a schedule for his work on the comic, primarily working at night due to his job at video game company Naughty Dog, where he was working on Uncharted 2: Among Thieves (2009). He ensured that most of the writing and thumbnails were complete prior to crunch time on Uncharted 2, as he felt that it would be very difficult to work on both projects simultaneously.[2]

The process that most of the artwork underwent throughout development: Druckmann's thumbnail drawings, followed by Wong's sketching, refining, blocking, and painting.

Druckmann originally wrote A Second Chance at Sarah as a three-issue series, but narrowed it to a single graphic novel for ease of publishing. He also felt that there was a possibility that a first issue would not be successful enough to justify printing more.[2] While writing the script for the comic, Druckmann drew thumbnail pages in order to visualize the flow of the story. During the writing period, he often switched between the thumbnails and the scripts. "Having the two influence each other keeps the process fresh and organic," said Druckmann.[3] When he completed the script and thumbnails, he sent them to Wong, who interpreted the writing into her own style by sketching rough pages, ensuring the compositions worked well.[4] She then refined the pages, conveying the subtlety in the emotions of the characters; Druckmann and Wong wished to avoid having any scenes feel melodramatic, in both writing and art.[5] Following this, Wong added color to the pages. Druckmann expressed the importance of using colors to separate the different time periods of the story, and to mirror Johnny's emotional journey.[6] The final step for Wong was painting, which involved defining details; Druckmann said that painting the artwork "[transforms] the rigid feel of the earlier versions to the unrestrained painterly look ... in the final pages".[7]

When seeking potential publishers for the comic, Druckmann contacted Ape Entertainment due to his fondness of "the quality and the variety of their books".[2] After submitting the pitch, he was contacted by then-CEO David Hedgecock, who was enthusiastic about publishing the book despite the marketing challenges that this would entail. Druckmann felt that the book "wouldn't be as good" without the efforts of Hedgecock, COO Brent Erwin and editor Kevin Freeman.[2] The book was re-published by Dark Horse Comics on August 20, 2014.[8]

Druckmann considers A Second Chance at Sarah to be a "personal story" that he "wanted to tell".[9] As a child, he was always interested in creating a comic book, and his ideas developed as he aged.[10] The novel was inspired by Druckmann's interest in traveling back in time to meet his wife at a younger age. "There's something cute and poetic about that idea," he explained.[1] This idea itself was inspired by time travel stories, particularly the Back to the Future film series (1985–90).[1] Druckmann felt that A Second Chance at Sarah is "a love story driven by grounded characters", not about the demons or time travel featured in the story; he considered the latter a "secret weapon" to attract more readers, and found it necessary to advance the story.[10] Druckmann considered the characters "interesting, yet flawed", and he and Wong worked to "portray the subtlety of emotions".[10] Druckmann felt that he shared many similarities with the novel's protagonist Johnny, and that "a lot of Johnny's flaws and fears are based on [his] own shortcomings".[1] He used the character to deal with his own fears of adulthood and of losing his wife, considering Johnny an "exaggerated version" of himself.[10]

After the birth of their son, Johnny's wife Sarah falls into a coma. Johnny soon discovers her talisman, which she had previously used to make a deal with a demon to save the life of her sister Rachel, unbeknownst to Johnny. In order to save Sarah, Johnny also makes a deal with the demon, and is transported back to 1995, where he possesses the body of his younger self.[11] He meets a younger Sarah,[12] who invites him to a party.[13] As they travel to the party, Johnny informs Sarah of the situation, but she dismisses it as a pick-up attempt.[14] When they arrive, Johnny sees Rachel with the talisman and tells her to dispose of it; without responding, she ends the party.[15] After she leaves, Rachel is involved in a car accident, and is transported to the hospital.[16] Sarah, who now believes Johnny's story,[17] goes to make a deal with the demon in order to save Rachel. However, upon discovering that the demon demands the sacrifice of Johnny and Sarah's child, Sarah destroys the talisman, and Rachel dies.[18] These events alter those of the present day: Sarah never fell into a coma and instead lives normally with Johnny and their son.[19] 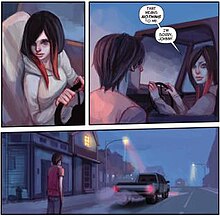 The comic's artwork, with illustrations by Joysuke Wong, received particular praise for its subtlety, and appropriateness to the story.

A Second Chance at Sarah received generally positive reviews. Praise was particularly directed at Wong's illustrations, as well as Druckmann's writing and character development, which were said to complement each other.[20]

Reviewers praised the comic's artwork. Greg Ellner of The Pullbox called it "the perfect coupling to Druckmann's story", stating that Wong "has a firm grasp of the intricacies of visual story telling".[20] Following the Nerd's Dave Bowling felt that, through the artwork, the book "truly comes to life".[21] Peter Paltridge of PopGeeks praised the "rough and sketchy" look to the artwork, and found that it was fitting to the story.[22] ComicBuzz's Ellen Murray wrote that the artwork has a "beautiful flow", praising the use of colors.[23] Jacqueline Lopez of Fanboy Comics called the artwork "stunning", comparing it to the Fables series (2002–15).[24] Jef Fox, writing for I Smell Sheep, found the artwork "breathtaking", and felt that it evoked feelings of nostalgia.[25] HorrorTalk's James Ferguson echoed similar remarks, praising the subtlety of Wong's artwork and naming it "clean and pure".[26]

The comic's story also received positive reactions. Following the Nerd's Bowling called it "extremely well-written", commending its ability to attract readers and make them empathize with the characters.[21] Paltridge of PopGeeks declared the story "even better" than Druckmann's work on The Last of Us (2013).[22] Ellner of The Pullbox praised the story, noting a particular connection with the character of Johnny early in the story.[20] Lopez of Fanboy Comics found that the "character complexity is a bit lacking", but felt that the pacing of the story is helpful in understanding plot points.[24] Doreen Sheridan, writing for I Want My Two Dollars!, felt that the "dialogue is a little clunky, but it's a satisfying read nonetheless".[27] ComicBuzz's Murray criticized the short length of the story, commenting on the lack of time dedicated to providing depth for the characters or plot.[23]

Retrieved from "http://en.turkcewiki.org/w/index.php?title=A_Second_Chance_at_Sarah&oldid=1094998461"
This website is a mirror of Wikipedia, and is not affiliated with the Wikimedia Foundation.
Categories:
Hidden categories: