The 2014 FIFA World Cup opening ceremony took place on Thursday, 12 June 2014, at the Arena de São Paulo in São Paulo, Brazil at 15:15 Brasília official time (UTC−3), about a quarter to two hours before the opening match of the tournament between hosts Brazil and Croatia.[1]

In the hours leading up to the ceremony, several hundred Brazilian football fans took to the streets to sing and declare their support for the host nation's national team, as excitement for the opening match of the tournament continued to build up. However, several thousand others continued demonstrations against the cost of hosting the tournament, which are estimated at a total of about US$16 billion at the expense of both FIFA and the Brazilian government, making it the most expensive World Cup in history.[2][3] Police in São Paulo reportedly had to use teargas to disperse one group of around 50 protesters, while striking airport workers blocked off a road leading to the Aeroporto Internacional de São Paulo, demanding an increase in wages as well as a World Cup bonus. The strike was to have lasted for 24 hours, but for legal reasons union leaders called it off early.[4]

The opening match and ceremony was attended by many guests : 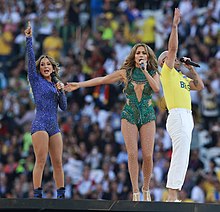 With the ceremony lasting about 30 minutes, a host of 660 dancers put on a performance paying tribute to Brazil's nature, people and football, with a "living ball" situated in the middle of the pitch.[5] The performers were dressed as several types of trees and flowers.[6] The entire ensemble performed three separate acts leading up to the finale where the ball opened up to reveal Brazilian singer Claudia Leitte, who sang alone for a few minutes before being joined by Jennifer Lopez and Pitbull, with whom she performed the tournament's official song "We Are One (Ole Ola)", which was co-written and recorded by the three artists.[4] The cost of the opening ceremony is estimated at R$18 million.[7]

Retrieved from "http://en.turkcewiki.org/w/index.php?title=2014_FIFA_World_Cup_opening_ceremony&oldid=1075011814"
This website is a mirror of Wikipedia, and is not affiliated with the Wikimedia Foundation.
Categories:
Hidden categories: