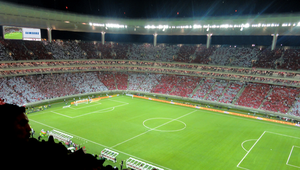 The closing ceremony was originally scheduled to be held at Jalisco Stadium. However, the organizing committee for the Games (COPAG) changed the venue to Omnilife Stadium, because of its superior infrastructure and technological capability to host the event. Also, its proximity to the athletes village helped expedite the transportation of athletes and helped ensure their safety.[1]

As per tradition, the Pan American Sports Organization flag was presented to the mayor of the next host city, Rob Ford of Toronto.[2]

Puerto Rican singer Ricky Martin and The Wailers performed at the ceremony.[3]

Dignitaries and other officials in attendance[edit]

Retrieved from "http://en.turkcewiki.org/w/index.php?title=2011_Pan_American_Games_closing_ceremony&oldid=1046038197"
This website is a mirror of Wikipedia, and is not affiliated with the Wikimedia Foundation.
Categories:
Hidden categories: