Although in frail health and 91 years old, the former South African president Nelson Mandela was scheduled to attend the opening ceremony, however had pulled out after the death of his great-granddaughter, who was killed in a car crash earlier in the day.[4] A pre-recorded message appeared on the stadium screens instead.[5] 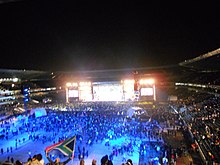 The opening celebration concert at the Orlando Stadium.

Retrieved from "http://en.turkcewiki.org/w/index.php?title=2010_FIFA_World_Cup_opening_ceremony&oldid=1075011763"
This website is a mirror of Wikipedia, and is not affiliated with the Wikimedia Foundation.
Categories:
Hidden categories: