In 1988, members of PASO voted to hold the first Pan American Winter Games at Las Leñas, Argentina in September 1989. It was further agreed that Winter Games would be held every four years. Lack of snow however, forced the postponement of the games until 16–22 September 1990[2] when only eight countries sent 97 athletes to Las Leñas. Of that total, 76 were from just three countries: Argentina, Canada, and the United States.

On September 16, Néstor Lowel, president of Las Leñas received the Olympic Flag from Antonio Rodríguez, then president of the Argentine Olympic Committee. Aristeo Benavídez, alpine skier that represented Argentina at the 1952 Winter Olympics, lit the Olympic cauldron after Governor José Octavio Bordón declared the games officially opened. The skier Carolina Eiras, who had represented Argentina at the 1988 Winter Olympics and would be the flag bearer in 1992, made the Olympic Oath.

Weather was unseasonably warm and again there was little snow, so only three Alpine Skiing events – the Slalom, Giant Slalom, and Super G were staged. The United States and Canada won all 18 medals. 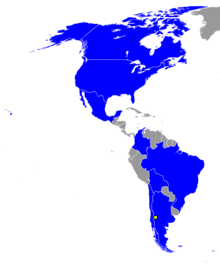 The participant nations of the first and only Winter Pan American Games, held in Las Leñas.

Retrieved from "http://en.turkcewiki.org/w/index.php?title=1990_Winter_Pan_American_Games&oldid=1058017591"
This website is a mirror of Wikipedia, and is not affiliated with the Wikimedia Foundation.
Categories:
Hidden categories: