The arch is typical of Synapsida (“fused arch”), a clade of amniotes that includes mammals and their extinct relatives, such as Moschops and Dimetrodon.

The zygomatic process of the temporal arises by two roots:

The upper border of the arch gives attachment to the temporal fascia;[2] the lower border and medial surface give origin to the masseter.

High cheekbones are pronounced zygomatic arches, causing the upper part of the cheeks to jut out and form a line cut into the sides of the face. High cheekbones, forming a symmetrical face shape, are very common in fashion models and may be considered a beauty trait in both males and females, at least in Eurocentric societies.[3] 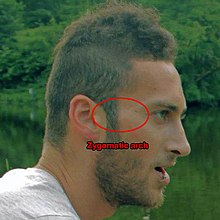 The zygomatic arch on a man

The term zygomatic derives from the Greek ζύγωμα zygōma, meaning "bolt, bar", derived from ζυγο-, "yoke, join". The Greek word was already used with this anatomical sense by Galen (2.437, 746) in the 2nd century AD. The zygomatic arch is occasionally referred to as the zygoma, but this term usually refers to the zygomatic bone or occasionally the zygomatic process.

The zygomatic arch is significant in evolutionary biology, as it is part of the structures derived from the ancestral single temporal fenestra of the synapsid ancestor of mammals.

Retrieved from "http://en.turkcewiki.org/w/index.php?title=Zygomatic_arch&oldid=931981510"
This website is a mirror of Wikipedia, and is not affiliated with the Wikimedia Foundation.
Categories:
Hidden categories: