Jump to navigation Jump to search
For other uses, see Yus (disambiguation). 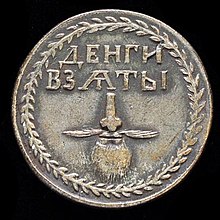 The names of the letters do not imply capitalization, as both little and big yus exist in majuscule and minuscule variants.

All modern Slavic languages that use the Cyrillic alphabet have lost the nasal vowels (at least in their standard varieties), making Yus unnecessary.

Big Yus was a part of the Bulgarian alphabet until 1945. However, by then, in the eastern dialects, the back nasal was pronounced the same way as ъ [ɤ]. Because the language is based mainly on them, the western pronunciations were deemed unliterary, and the letter was gone.

There were some Bulgarian and Macedonian dialects spoken around Thessaloniki and Kastoria in northern Greece that still preserve a nasal pronunciation e.g. [ˈkɤ̃de ˈɡrẽdeʃ ˈmilo ˈt͡ʃẽdo] (Къде гредеш, мило чедо?; "Where are you going, dear child?"), which could be spelled pre-reform as "Кѫде грѧдеш, мило чѧдо?" with big and little yus.

On a visit to Razlog, in Bulgaria's Pirin Macedonia, in 1955, the Russian dialectologist Samuil Bernstein noticed that the nasal pronunciation of words like [ˈrɤ̃ka] (hand), [ˈt͡ʃẽdo] (child) could still be heard from some of the older women of the village. To the younger people, the pronunciation was completely alien; they would think that the old ladies were speaking Modern Greek.[2]

In Russia, the little Yus came to be pronounced as an iotated /ja/ (я) in the middle or at the end of a word and therefore came to represent that sound also elsewhere; the modern letter я is an adaptation of its cursive form of the 17th century, enshrined by the typographical reform of 1708. (That is also why я in Russian often corresponds to nasalized ę in Polish; cf. Russian пять; Polish pięć.)

In Polish, which is a Slavic language written in the Latin alphabet, the letter Ę ę has the phonetic value of little Yus, and Ą ą has that of big Yus. The iotated forms are written ię, ią, ję, ją in Polish. However, the phonemes written ę and ą are not directly descended from those represented by little and big yus but developed after the original nasals merged in Polish and then diverged again. (Kashubian, the closest language to Polish, uses the letter ã instead of ę.)

Little and big yuses can also be found in the Romanian Cyrillic alphabet, used until 1862. Little Yus was used for /ja/ and big Yus for /ɨ/. Now Romanian uses the Latin alphabet and /ɨ/ is written Îî or Ââ.

The interslavic language, a zonal, constructed, semi-artificial language based on Proto-Slavic and Old Church Slavonic modified based on the commonalities between living Slavic languages, allows (though doesn't encourage it for intelligibility purposes) to use both the little and big yus when writing in the scientific variety of its Cyrillic script. The letters correspond directly to their etymological values from Proto-Slavic, but do not retain the nasal pronunciation, instead going for one aiming to convey the "middle-ground" sounds found in etymologically corresponding letters in living Slavic languages. The iotated versions are not part of the standard scientific vocabulary, where the yuses are instead accompanied by the Cyrillic letter "ј", also used in the modern Serbian alphabet, though their use is optionally permissible for aesthetic reasons if one opts for using the more standard iotated vowels in their writing, so that consistency is preserved.

Retrieved from "http://en.turkcewiki.org/w/index.php?title=Yus&oldid=947616940"
This website is a mirror of Wikipedia, and is not affiliated with the Wikimedia Foundation.
Categories:
Hidden categories: