(Redirected from Yokutsan languages)
Jump to navigation Jump to search
Endangered language spoken in the Central Valley of California
Not to be confused with Yakut language.

Yokuts, formerly known as Mariposa, is an endangered language spoken in the interior of Northern and Central California in and around the San Joaquin Valley by the Yokuts people. The speakers of Yokuts were severely affected by disease, missionaries, and the Gold Rush. While descendants of Yokuts speakers currently number in the thousands, most of the constituent dialects are now extinct. 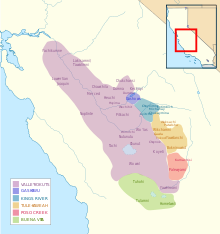 Map of Yokuts with dialects indicated

The Yawelmani dialect of Valley Yokuts has been a focus of much linguistic research.

General Yokuts (all others)

Most Yokuts dialects are extinct, as noted above. Those that are still spoken are endangered.

Chukchansi is now a written language, with its own alphabet developed on a federal grant. Chukchansi also has a phrase book and dictionary that are partially completed. In May 2012, the Linguistics Department of Fresno State University received a $1 million grant to compile a Chuckchansi dictionary and grammar texts,[2] and to "provide support for scholarships, programs, and efforts to assemble native texts and create a curriculum for teaching the language so it can be brought back into social and ritual use."[3]

Yokutsan is a key member in the proposed Penutian language stock. Some linguists consider most relationships within Penutian to be undemonstrated (cf. Campbell 1997). Others consider a genetic relationship between Yokuts, Utian, Maiduan, Wintuan, and a number of Oregon languages to be definite (cf. DeLancey and Golla 1997). Regardless of higher-order disagreement, Callaghan (1997) provides strong evidence uniting Yokuts and the Utian languages as branches of a Yok-Utian language family.

The term "Delta Yokuts" has recently been introduced in lieu of the longer "Far Northern Valley Yokuts" for the dialect spoken by the people in the present Stockton and Modesto vicinities of San Joaquin and Stanislaus counties, California, prior to their removal to Mission San Jose between 1810 and 1827. Of interest, Delta Yokuts contains a large number of words with no cognates in any of the other dialects, or for that matter in the adjacent Utian languages, although its syntax is typically Northern Valley Yokuts (Kroeber 1959:15-17). This anomaly has led Whistler (cited by Golla 2007:76) to suggest, "The vocabulary distinctive of some of the Delta Yokuts dialects may reflect substratal influence from pre-proto-Yokuts or from an extinct Yok-Utian language." Golla (2007:77) suggests that a "pre-proto-Yokuts" homeland was in the Great Basin, citing a rich plant and animal vocabulary for a dry environment and a close connection between Yokuts basketry styles and those of prehistoric central Nevada.

Proto-Yokuts reconstructions from Whistler and Golla (1986):[4]

Retrieved from "http://en.turkcewiki.org/w/index.php?title=Yokuts_language&oldid=964414361"
This website is a mirror of Wikipedia, and is not affiliated with the Wikimedia Foundation.
Categories:
Hidden categories: