The World Food Programme[a] (WFP) is the food-assistance branch of the United Nations and the world's largest humanitarian organization addressing hunger and promoting food security.[1] According to the WFP, it provides food assistance to an average of 91.4 million people in 83 countries each year.[2] From its headquarters in Rome and from more than 80 country offices around the world, the WFP works to help people who cannot produce or obtain enough food for themselves and their families. It is a member of the United Nations Development Group and part of its executive committee.[3]

WFP was established in 1963[4] after the 1960 Food and Agriculture Organization (FAO) Conference, when George McGovern, director of the US Food for Peace Programmes, proposed establishing a multilateral food aid programme. The WFP was formally established in 1963 by the FAO and the United Nations General Assembly on a three-year experimental basis. In 1965, the programme was extended to a continuing basis.

The WFP strives to eradicate hunger and malnutrition, with the ultimate goal in mind of eliminating the need for food aid itself. Its objectives are to:[5]

The WFP operations are funded by voluntary donations from governments of the world, corporations and private donors. The organization's administrative costs are only six and half percent—one of the lowest and best among aid agencies.[citation needed] From 2008-2012, private voluntary donors donated around $500 million.[citation needed] In 2016, WFP received from donors in total US$5,933,529,247. The USA was the major donor of WFP with 2 billion US$, followed by the European Commission (894 million US$) and Germany (884 million US$).[6]

The WFP is governed by an executive board which consists of representatives from 36 member states. David Beasley, from South Carolina, United States, is the current executive director, appointed jointly by the UN Secretary General and the director-general of the FAO for a five-year term. He heads the secretariat of the WFP. The European Union is a permanent observer in the WFP and, as a major donor, participates in the work of its executive board.[7] 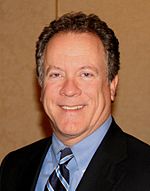 Its vision is a "world in which every man, woman and child has access at all times to the food needed for an active and healthy life."

The Logistics Cluster[9] is an Inter-Agency Standing Committee (IASC) humanitarian coordination mechanism whose primary role is supporting emergency responses. One of eleven sectoral coordination bodies, it was set by UN General Assembly resolution 46/182 in December 1991 and extended in the Humanitarian Reform of 2005, with new elements adopted to improve capacity, predictability, accountability, leadership and partnership.

In 2015, the WFP reached 76.7 million people in 81 countries. In emergencies, more than 50 million people were reached in order to improve their nutrition and food security. School meals were provided to 17.4 million children, helping keep them in school to ensure uninterrupted access to education.[13]

The WFP has scaled up its use of cash and vouchers as food assistance tools. Cash or voucher programmes supported 7.9 million people in 2013. In the same year, the WFP purchased food in 91 countries; 86% of that food came from developing countries.[14]

In 2017 WFP launched the Building Blocks Program. It aims to distribute money-for-food assistance to Syrian refugees in Jordan. The project uses blockchain technology to digitize identities and allow refugees to receive food with eye scanning.[15]

The WFP unloads humanitarian aid at the Freeport of Monrovia during Joint Task Force Liberia.

Among its other activities, the WFP has coordinated the five-year Purchase for Progress (P4P) pilot project. Launched in September 2008, P4P assists smallholding farmers by offering them opportunities to access agricultural markets and to become competitive players in the marketplace. The project spanned across 20 countries in Africa, Asia, and Latin America and trained 800,000 farmers in improved agricultural production, post-harvest handling, quality assurance, group marketing, agricultural finance, and contracting with the WFP. The project resulted in 366,000 metric tons of food produced and generated more than US$148 million in income for its smallholder farmers.[16]

The WFP focuses its food assistance on those who are most vulnerable to hunger, which most frequently means women, children, the sick and the elderly. In fact, part of the response to the 2010 Haiti earthquake consisted of distributing food aid only to women as experience built up over almost five decades of working in emergency situations has demonstrated that giving food only to women helps to ensure that it is spread evenly among all household members. School-feeding and/or take-home ration programmes in 71 countries help students focus on their studies and encourage parents to send their children, especially girls, to school.[17]

The WFP has a system of classifications known as the Emergency Response Procedures designed for situations that require immediate response.

This response is activated under the following criteria:

The Emergency Response Classifications are divided as follows, with emergency intensity increasing with each level:[18]

As of April 2020[update] the following are classified as L3 emergencies:[19]

The WFP coordinates and cooperates with a number of official partners in emergencies and development projects. These partners include national government agencies such as DFID, ECHO, EuropeAid, USAID; UN agencies such as the Food and Agriculture Organization (FAO) and the International Fund for Agricultural Development (IFAD); non-governmental organizations such as Save the Children, Catholic Relief Services and Norwegian Refugee Council; as well as corporate partners such as Boston Consulting Group, DSM N.V., and Cargill.[20]

In 2004, the WFP tasked Auburn University in Auburn, Alabama with heading the first student-led War on Hunger effort, after a 2002 Northwestern University pilot. Auburn founded the Committee of 19, which has not only led campus and community hunger awareness events but also developed a War on Hunger model for use on campuses across the country.

The WFP has launched a global advocacy and fundraising event called Walk the World. On one single day each year, hundreds of thousands of people in every time zone all over the world walk to call for the end of child hunger. In 2005, more than 200,000 people walked in 296 locations. In 2006, there were 760,000 participants in 118 countries all over the world. This event is part of the campaign to achieve the Millennium Development Goals, specifically to halve the number of people who suffer from hunger and poverty by 2015.

A growing number of grassroots global events and celebrations such as International Day of Peace, World Party Day participants, and Peace One Day recommend the WFP on radio broadcasts as an immediate reach out action, putting help within reach of anyone with the information that a quarter feeds a child for a day. Fill the Cup campaign takes just 25 US cents to fill one of the "red cups" that the World Food Programme uses to give hungry children a regular school meal of porridge, rice or beans.[21][22][23] Christina Aguilera, Drew Barrymore and Sean Penn are among notable celebrities who endorse the WFP.[24][25] The British singer Sami Yusuf joined with the WFP to support the drought-stricken in Horn of Africa[26] through his personal campaign, LiveFeedAfrica[27] and music video, Forgotten Promises.[28]

In June 2018, composer and WFP supporter Benson Taylor, travelled to the Bidi Bidi Refugee Settlement in Uganda with the WFP to raise awareness for World Refugee Day.[29][30][31]

In 2007, the WFP joined with Yum! Brands, the world's largest restaurant company, to launch the first annual World Hunger Relief Week, a global campaign to increase awareness about hunger, engage volunteers, and raise critically needed funds to help the WFP serve the world's areas of greatest need. World Hunger Relief Week 2007 leveraged the power of nearly 35,000 restaurants around the world, sparking a global movement to end hunger and generating an overwhelming outpouring of support from millions of customers, employees, franchisees and their families. Nearly one million Yum!, KFC, Pizza Hut, Taco Bell, Long John Silver's and A&W All American Food employees, franchisees and their families volunteered close to 4 million hours to aid hunger relief efforts in communities worldwide, while helping to raise $16 million throughout the World Hunger Relief Week initiative for the World Food Programme and other hunger relief agencies around the world. The initiative has been repeated every year since.

World Food Program USA, before 2010 known as Friends of the World Food Program,[32] works to solve global hunger, building a world where everyone has the food and nutrition needed to lead healthy, productive lives. WFP USA raises support for these efforts in the United States by engaging individuals, organizations and businesses, shaping public policy and generating resources for WFP.[33]

The current chairman is Randy Russell.[34] Previously, the Chairman of the Board of World Food Program USA was Hunter Biden, son of former U.S. Vice President Joe Biden.[35][36] The chairman at inception of the current organization in 2010 was Randall Russell.[37]

The World Food Programme's Innovation Accelerator, located in Munich, Germany, has operated since 2016 to source, support, test, and scale innovative approaches to address hunger and food insecurity. Innovative ideas may be found from within WFP global staff, entrepreneurs, start-ups, companies and non-governmental organizations, and are invited to apply on a rolling basis, and through annual Innovation Challenges. Short-listed ideas may be invited to Innovation Bootcamps where innovation teams meet with professional facilitators, mentors and experts from a variety of disciplines in order to fine-tune their proposals and pitch their ideas to potential investors, business supports, and WFP operations. Successful innovations may qualify for financial support to develop the innovation, 3-6 month field testing in WFP's global operations, or scale-up support to expand proven concepts for regional or global impact.

The WFP Innovation Accelerator provides innovation services not only to WFP, but also other United Nations organizations, such as UNFPA, UNICEF, UNHCR; other non-profit or non-governmental organizations such as the Bill and Melinda Gates Foundation, the Humanitarian Grand Challenge, and XPRIZE; and has partnered with various private sector companies such as Cargill, Google, BCG, and others.

Successful innovations that came through the WFP Innovation Accelerator include: H2Grow Hydroponics: to grow food and animal fodder in extreme environments, using no soil and minimal water. SCOPE CODA: Personal smartcards are issued to people which replace paper-based health records with digital records, and enable frontline workers track nutritional needs, and make informed decisions with real-time data. EMPACT: Digital skills training to prepare conflict-affected youth for the future of work, and enabling them to provide for themselves and their families. ShareTheMeal: WFP's first crowdfunding app, ShareTheMeal enables microdonations from mobile phones and its website, based on the estimation that it costs USD $0.50 to provide 1 meal. In December 2019, ShareTheMeal funded over 50 million meals globally.[38]

Kenyan economist James Shikwati said in a 2005 interview with Der Spiegel: "aid to Africa does more harm than good".[39] According to him, the food aid increases corruption as local politicians have the opportunity to steal some of the aid to bribe voters or to sell the aid in the black markets killing the local agriculture.[40] He claims that the WFP people as an organization "are in the absurd situation of, on the one hand, being dedicated to the fight against hunger while, on the other hand, being faced with unemployment were hunger actually eliminated". He suggests that WFP answers too easily to the calls of the corrupted governments, and supplies too much of food aid leading to reduction of the production of local farmers as "no one can compete with the UN's World Food Programme".

The World Food Programme was also criticized by José Ciro Martínez and Brent Eng in an essayThe Unintended Consequences of Emergency Food Aid: Neutrality, Sovereignty and Politics in the Syrian Civil War, 2012-15. In an interview, an employee of the WFP stated: "Most aid is still subject to strict control measures by the government, who also requests that it be distributed through state approved bodies such as SARC. I believe the government closely oversees if not completely controls these organizations." The authors added that food aid given in Syria would go to the military and its men first.[41]

The following is a chronological list of those who have held the Executive Director of the World Food Programme position:[42]

Retrieved from "http://en.turkcewiki.org/w/index.php?title=World_Food_Programme&oldid=966227698"
This website is a mirror of Wikipedia, and is not affiliated with the Wikimedia Foundation.
Categories:
Hidden categories: