WFUNA is an international non-governmental organization with Consultative Status at the United Nations Economic and Social Council (ECOSOC) and consultative or liaison links with many other UN organizations and agencies. As a Federation, its membership is made of 95 United Nations Associations (UNAs) in as many member states of the UN.

WFUNA is the largest non-profit organization with the mission of supporting the principles and purposes of the UN.

The basis for the existence of a people's movement in favor of a global intergovernmental organisation was set by the International Federation of League of Nations Societies (French: Union internationale des associations pour la Société des Nations) which ceased operations in 1939.[1]

WFUNA was founded in Luxembourg on 2 August 1946[2] by 22 national United Nations Associations (UNAs). The Constitution they adopted proclaims that:

"We the representatives of the United Nations Associations in our respective countries,

Believing that the peace must be founded, if it is not to fail, upon the intellectual and moral solidarity of all peoples,

Have resolved to combine our efforts to form an association of the peoples to be known as the World Federation of United Nations Associations."[3]

Over the years, UNAs have been established in more UN member-States especially as new countries were formed and joined the UN.

Eleanor Roosevelt was an active participant in WFUNA and one of the leading figures in its creation.[4]

In practical terms, WFUNA played a crucial role by helping people in those countries where human rights were violated, such as Franco's Spain, some of the former communist countries in Eastern Europe and in the Middle East. WFUNA brought together people of divided countries – such as East and West Germany and Cyprus, and the opponents in conflicts, for example between Israel and Egypt in the late 1960s.

WFUNA helped promote "Security and Co-operation in Europe" (CSCE) by holding in 1967 the first conference on this topic. Other NGOs followed WFUNA's campaign which continued until 1975 when the Final Act was signed at Helsinki by 35 governments, including United States and Canada, establishing the CSCE process. Further campaigning led in 1994 to the CSCE process that consisted of a Biennial Review Conference being raised to a Permanent Organization (OSCE).

WFUNA, including its African UNA members, made significant contributions to the NGO campaign for the abolition of Apartheid. The 32nd General Assembly of the UN, in 1977, received a resolution from the 117th WFUNA Executive Committee meeting, which requested:

"The Security Council of the UN to give urgent consideration to the taking of immediate steps to ensure that no State, multinational or other body or person be allowed to provide South Africa or Rhodesia with any equipment, technology or production of nuclear weapons of any kind".

WFUNA facilitated high-level informal consultations on disarmament issues between key experts of the US and USSR during the Cold War. It organized a number of NGO Seminars on disarmament in cooperation with the UN, UNESCO and other NGOs.

During its history, WFUNA has served as a forum for global dialogues on development. Several suggestions, like the establishment of an Economic Commission for Africa, were first adopted at the WFUNA Plenary Assemblies and then endorsed by governments.

WFUNA has actively supported reform of the UN and its capacity to meet new tasks and challenges. WFUNA has continually received recognition from the highest ranks of the UN. The sentiments in this statement by UN Secretary-General, Dag Hammerskjöld, to WFUNA's 12th Plenary Assembly were shared by his successors: "I wish... to express my appreciation of your most essential service. At the same time, I wish to urge you to fresh endeavors. Over the years you have accomplished much and have acted with an ever increasing sense of your great responsibilities."

For many years WFUNA conducted a fund raising program based on the sale of first day covers of UN stamps and lithographs produced by artists and celebrities, such as Picasso, Lou Zheng Jang, Miró, Salvador Dalí, Ruben Leyva, Al Hirschfeld and Andy Warhol to promote the ideals of the UN. This highly successful program ran for several decades during the 20th century.

The UN General Assembly has adopted several resolutions expressing appreciation for WFUNA's efforts to support the values of the UN. In 1986 resolution 41/68 recognizes WFUNA as "the only non-profit that is entirely dedicated to mobilize popular support for the goals and principles of the United Nations" and asks for "all governments to help WFUNA" in its actions. In 2013, resolution 64/86 commends the World Federation of United Nations Associations and its United Nations associations for the valuable contributions they have made, and calls for continued collaboration between the World Federation and the Department of Public Information in support of their complementary objectives". In 2015, resolution 70/93 recalls resolution 41/68. 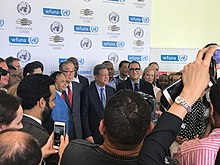 Leonel Fernandez and WFUNA's Leadership on the day of his election, 20 October 2018

There are currently 92 UN Associations connecting hundreds of thousands of people to the United Nations. UNAs at the national level mainly play a role in:

A United Nations Association can only be recognized in a UN member-State and there can be only one in each UN member-State. All Associations are non-profit organizations, independent from one another. WFUNA is in charge of the coordination of the network and puts efforts in building the capacity of its existing members while trying to provide counseling to those groups willing to create new UNAs in member-State that don't have any.

The continent with the most UN associations is Europe immediately followed by Africa while South America has seen a rapid growth in numbers of UNAs in the last decade.

WFUNA is involved with the UN system since its inception and has been working with most Member States through its activities and through its member Associations.

Retrieved from "http://en.turkcewiki.org/w/index.php?title=World_Federation_of_United_Nations_Associations&oldid=959540526"
This website is a mirror of Wikipedia, and is not affiliated with the Wikimedia Foundation.
Categories:
Hidden categories: