Jump to navigation Jump to search
Group of five international organizations that make leveraged loans to developing countries
Not to be confused with World Bank.

The World Bank Group (WBG) is a family of five international organizations that make leveraged loans to developing countries. It is the largest and most well-known development bank in the world and is an observer at the United Nations Development Group.[6] The bank is headquartered in Washington, D.C. in the United States. It provided around $61 billion in loans and assistance to "developing" and transition countries in the 2014 fiscal year.[7] The bank's stated mission is to achieve the twin goals of ending extreme poverty and building shared prosperity.[7] Total lending as of 2015 for the last 10 years through Development Policy Financing was approximately $117 billion.[8] Its five organizations are the International Bank for Reconstruction and Development (IBRD), the International Development Association (IDA), the International Finance Corporation (IFC), the Multilateral Investment Guarantee Agency (MIGA) and the International Centre for Settlement of Investment Disputes (ICSID). The first two are sometimes collectively referred to as the World Bank.

The World Bank's (the IBRD and IDA's) activities are focused on developing countries, in fields such as human development (e.g. education, health), agriculture and rural development (e.g. irrigation and rural services), environmental protection (e.g. pollution reduction, establishing and enforcing regulations), infrastructure (e.g. roads, urban regeneration, and electricity), large industrial construction projects, and governance (e.g. anti-corruption, legal institutions development). The IBRD and IDA provide loans at preferential rates to member countries, as well as grants to the poorest countries. Loans or grants for specific projects are often linked to wider policy changes in the sector or the country's economy as a whole. For example, a loan to improve coastal environmental management may be linked to development of new environmental institutions at national and local levels and the implementation of new regulations to limit pollution.[9]

The World Bank has received various criticisms over the years and was tarnished by a scandal with the bank's then President Paul Wolfowitz and his aide, Shaha Riza, in 2007.[10]

The WBG came into formal existence on 27 December 1946 following international ratification of the Bretton Woods agreements, which emerged from the United Nations Monetary and Financial Conference (1–22 July 1944). It also provided the foundation of the Osiander Committee in 1951, responsible for the preparation and evaluation of the World Development Report. Commencing operations on 25 June 1946, it approved its first loan on 9 May 1947 (US$250M to France for postwar reconstruction, in real terms the largest loan issued by the Bank to date).

All of the 193 UN members and Kosovo that are WBG members participate at a minimum in the IBRD. As of May 2016, all of them also participate in some of the other four organizations: IDA, IFC, MIGA, ICSID.,

WBG members by the number of organizations which they participate in:[2] 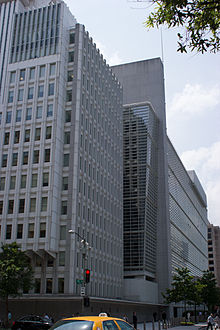 Together with four affiliated agencies created between 1957 and 1988, the IBRD is part of the World Bank Group. The Group's headquarters are in Washington, D.C. It is an international organization owned by member governments; although it makes profits, these profits are used to support continued efforts in poverty reduction.[11]

Technically the World Bank is part of the United Nations system,[12] but its governance structure is different: each institution in the World Bank Group is owned by its member governments, which subscribe to its basic share capital, with votes proportional to shareholding. Membership gives certain voting rights that are the same for all countries but there are also additional votes which depend on financial contributions to the organization. The President of the World Bank is nominated by the President of the United States and elected by the Bank's Board of Governors.[13] As of 15 November 2009 the United States held 16.4% of total votes, Japan 7.9%, Germany 4.5%, the United Kingdom 4.3%, and France 4.3%. As changes to the Bank's Charter require an 85% super-majority, the US can block any major change in the Bank's governing structure.[14]

The World Bank Group consists of

The World Bank Institute is the capacity development branch of the World Bank, providing learning and other capacity-building programs to member countries.

The IBRD has 189 member governments, and the other institutions have between 153 and 184 members.[2] The institutions of the World Bank Group are all run by a Board of Governors meeting once a year.[13] Each member country appoints a governor, generally its Minister of Finance. On a daily basis the World Bank Group is run by a Board of 25 Executive Directors to whom the governors have delegated certain powers. Each Director represents either one country (for the largest countries), or a group of countries. Executive Directors are appointed by their respective governments or the constituencies.[13]

The agencies of the World Bank are each governed by their Articles of Agreement that serve as the legal and institutional foundation for all of their work.[13]

The activities of the IFC and MIGA include investment in the private sector and providing insurance respectively.

Traditionally, the Bank President has always been a U.S. citizen nominated by the President of the United States, the largest shareholder in the bank. The nominee is subject to confirmation by the Executive Directors, to serve for a five-year, renewable term.[13]

Managing Director of The World Bank is responsible for organizational strategy; budget and strategic planning; information technology; shared services; Corporate Procurement; General Services and Corporate Security; the Sanctions System; and the Conflict Resolution and Internal Justice System. The present MD Shaolin Yang assumed the office after Sri Mulyani resigned from the post to take the charge as finance minister of Indonesia.[15][16]

After longstanding criticisms from civil society of the Bank's involvement in the oil, gas, and mining sectors, the World Bank in July 2001 launched an independent review called the Extractive Industries Review (EIR – not to be confused with Environmental Impact Report). The review was headed by an "Eminent Person", Dr. Emil Salim (former Environment Minister of Indonesia). Dr. Salim held consultations with a wide range of stakeholders in 2002 and 2003. The EIR recommendations were published in January 2004 in a final report entitled "Striking a Better Balance".[17] The report concluded that fossil fuel and mining projects do not alleviate poverty, and recommended that World Bank involvement with these sectors be phased out by 2008 to be replaced by investment in renewable energy and clean energy. The World Bank published its Management Response to the EIR in September 2004.[18] following extensive discussions with the Board of Directors. The Management Response did not accept many of the EIR report's conclusions. However, the EIR served to alter the World Bank's policies on oil, gas and mining in important ways, as has been documented by the World Bank in a recent follow-up report.[19] One area of particular controversy concerned the rights of indigenous peoples. Critics point out that the Management Response weakened a key recommendation that indigenous peoples and affected communities should have to provide 'consent' for projects to proceed – instead, there would be 'consultation'.[20] Following the EIR process, the World Bank issued a revised Policy on Indigenous Peoples.[21] 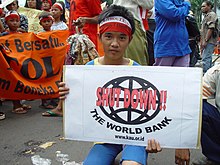 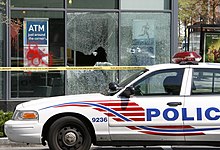 World Bank/IMF protesters smashed the windows of this PNC Bank branch located in the Logan Circle neighborhood of Washington, D.C.

The World Bank has long been criticized by a range of non-governmental organizations and academics, notably including its former Chief Economist Joseph Stiglitz, who is equally critical of the International Monetary Fund, the US Treasury Department, and US and other developed country trade negotiators.[22] Critics argue that the so-called free market reform policies – which the Bank advocates in many cases – in practice are often harmful to economic development if implemented badly, too quickly ("shock therapy"), in the wrong sequence, or in very weak, uncompetitive economies.[22] World Bank loan agreements can also force procurements of goods and services at uncompetitive, non free-market, prices.[23]:5 Other critical writers such as John Perkins, label the international financial institutions as 'illegal and illegitimate' and a cog of coercive American diplomacy in carrying out financial terrorism.[24]

In Masters of Illusion: The World Bank and the Poverty of Nations (1996), Catherine Caufield argues that the assumptions and structure of the World Bank operation ultimately harms developing nations rather than promoting them. In terms of assumption, Caufield first criticizes the highly homogenized and Western recipes of "development" held by the Bank. To the World Bank, different nations and regions are indistinguishable, and ready to receive the "uniform remedy of development". The danger of this assumption is that to attain even small portions of success, Western approaches to life are adopted and traditional economic structures and values are abandoned. A second assumption is that poor countries cannot modernize without money and advice from abroad.

A number of intellectuals in developing countries have argued that the World Bank is deeply implicated in contemporary modes of donor and NGO driven imperialism and that its intellectual contribution functions, primarily, to seek to blame the poor for their condition.[25]

Defenders of the World Bank contend that no country is forced to borrow its money. The Bank provides both loans and grants. Even the loans are concessional since they are given to countries that have no access to international capital markets. Furthermore, the loans, both to poor and middle-income countries, are at below market-value interest rates. The World Bank argues that it can help development more through loans than grants, because money repaid on the loans can then be lent for other projects.

Criticism was also expressed towards the IFC and MIGA and their way of evaluating the social and environmental impact of their projects. Critics state that even though IFC and MIGA have more of these standards than the World Bank they mostly rely on private-sector clients to monitor their implementation and miss an independent monitoring institution in this context. This is why an extensive review of the institutions' implementation strategy of social and environmental standards is demanded.[26]

The World Bank Group has also been criticized for investing in projects with human rights issues.[28]

The Compliance Advisor/Ombudsman (CAO) criticized a loan given to the palm oil company Dinant by the World Bank after the 2009 Honduran coup d'état. There have been numerous killings of campesinos in the region where Dinant was operating.[28][29]

Other controversial investments include loans for the Chixoy Hydroelectric Dam in Guatemala while it was under military dictatorship, and a loan to Goldcorp (then Glamis Gold) for the construction of the Marlin Mine.[28]

In 2019, the Congressional-Executive Commission on China questioned the World Bank about a loan in Xinjiang, China that was used to buy high-end security gear.[30] The World Bank launched an internal investigation in response to the allegation.[31]

Retrieved from "http://en.turkcewiki.org/w/index.php?title=World_Bank_Group&oldid=960493202"
This website is a mirror of Wikipedia, and is not affiliated with the Wikimedia Foundation.
Categories:
Hidden categories: