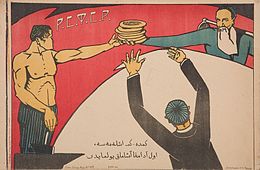 "He who does not work, neither shall he eat" – Soviet poster issued in Uzbekistan, 1920

Work ethic is a belief that hard work and diligence have a moral benefit and an inherent ability, virtue or value to strengthen character and individual abilities.[1] It is a set of values centered on importance of work and manifested by determination or desire to work hard. Social ingrainment of this value is considered to enhance character through hard work that is respective to an individual's field of work.[2]

Factors of a good work ethic[edit]

A good work ethic is the process of questioning, discovering and defending our values and purpose.[3] Proponents of a strong work ethic consider it to be vital for achieving goals, that it gives strength to their orientation and the right mindset. A work ethic is a set of moral principles a person uses in their job. People who possess a strong work ethic embody certain principles that guide their work behaviour; to develop and process a strong work ethic will inevitably result in the production of high-quality work which is consistent. The output motivates them to stay on track.[3] A good work ethic fuels an individual's needs and goals, it is related to the initiative by a person for the objectives. It is considered as a source of self respect, satisfaction, and fulfillment.[citation needed]

A negative work ethic is a behavior of a single individual or a group that has led to a systematic lack of productivity, reliability, accountability and a growing sphere of unprofessional/unhealthy relationships (e.g., power politics, lack of social skills, etc.).[6]

Assumptions about good work ethic is drawn out in philosophical writings of Goldman, they are:[7]

The Puritans who settled in New England around the 17th and 18th century believed that working hard at one's call was a sign that one would be saved. They were followed by Calvinists who believed in predestination and had faith that they were chosen or had the call from God to fulfill their duty in the world. To both of them, accumulation of wealth was an indicator of working to their fullest capacity as a response to the call and assurance for earning salvation. These ideologies are the foundations of the Protestant work ethic.

Remember, that time is money. He that can earn ten shillings a day by his labor, and goes abroad, or sits idle, one half of that day, though he spends but sixpence during his diversion or idleness, ought not to reckon that the only expense; he has really spent, or rather thrown away, five shillings besides.

Remember, that money is the prolific, generating nature. Money can beget money, and its offspring can beget more, and so on. Five shillings turned is six, turned again is seven and threepence, and so on, till it becomes a hundred pounds. The more there is of it, the more it produces every turning, so that the profits rise quicker and quicker. He that kills a breeding sow, destroys all her offspring to the thousandth generation. He that murders a crown, destroys all that it might have produced, even scores of pounds.[8]

Weber notes that this is not a philosophy of mere greed, but a statement laden with moral language. It is in effect an ethical response to the natural desire for hedonic reward, a statement of the value of delayed gratification to achieve self-actualization. Franklin claims that Bible readings revealed to him the usefulness of virtue. Indeed, this reflects the then-Christian search for the ethic for living and the struggle to make a living.[9]

Steven Malanga refers to "what was once understood as the work ethic—not just hard work but also a set of accompanying virtues, whose crucial role in the development and sustaining of free markets too few now recall".[10]

Experimental studies have shown that people with fair work ethic are able to tolerate tedious jobs with equitable monetary rewards and benefits, are highly critical, and have a tendency for workaholism and a negative relation with leisure activity concepts. They valued meritocracy and egalitarianism.[11]

In the 1940s, work ethic was considered very important and nonconformist ideals were dealt autocratically. Suppression of humor in the workplace was one of them. It is recorded that, at the Ford Company, a worker named John Gallo was fired for being "caught in the act of smiling".[12]

Countercultural groups and communities have challenged these values in recent decades.

Neither is it true any longer that the more each individual works, the better off everyone will be. In a post-industrial society, not everyone has to work hard in order to survive, though may be forced to anyway due to the economic system. The present crisis has stimulated technological change of an unprecedented scale and speed: 'the micro-chip revolution'. The object and indeed the effect of this revolution has been to make rapidly increasing savings in labour, in the industrial, administrative and service sectors. Increasing production is secured in these sectors by decreasing amounts of labour. As a result, the social process of production no longer needs everyone to work in it on a full-time basis. The work ethic ceases to be viable in such a situation and workbased society is thrown into crisis."[13]

Anti-capitalists believe that the concept of "hard work" is meant by capitalists to delude the working class into becoming loyal servants to the elite, and that working hard, in itself, is not automatically an honorable thing, but only a means to creating more wealth for the people at the top of the economic pyramid. In the Soviet Union, the regime portrayed work ethic as an ideal to strive for.[14]

The recession is a contributing factor that holds back work ethic, because the generation that inherits economic decline lives in an economy that isn’t ready to receive them. Without work there to do, the ethic that is attached to it fails to generate distinctive value. The negative work ethic and power structures that doesn't value or credit work done or unethically attribute work done as a service or with higher moral ideals have dissolved the ethic presented in the society and turned the focus onto self-centered perks and individualism. Further, urbanization and an emphasis on large-scale businesses has led to eliminating avenues for learning vital concepts about work. Millennials in a research identified what made them unique was consumerist trends like technology use, music/pop culture, liberal/tolerant beliefs, clothes, and individualistic ones like greater intelligence than work, they were not able to distinguish the concept in the traditional understandings of work ethic.[15]

Retrieved from "http://en.turkcewiki.org/w/index.php?title=Work_ethic&oldid=963717094"
This website is a mirror of Wikipedia, and is not affiliated with the Wikimedia Foundation.
Categories:
Hidden categories: