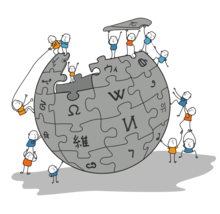 Wikipedia has a lofty goal: a comprehensive collection of all of the knowledge in the world.

Wikipedia's purpose is to benefit readers by acting as a free widely accessible encyclopedia; a comprehensive written compendium that contains information on all branches of knowledge. The goal of a Wikipedia article is to present a neutrally written summary of existing mainstream knowledge in a fair and accurate manner with a straightforward, "just-the-facts style". Articles should have an encyclopedic style with a formal tone instead of essay-like, argumentative, promotional or opinionated writing.

Concept of an encyclopedia

Wikipedia is intended to be the largest, most comprehensive, and most widely-available encyclopedia ever written

Retrieved from "http://en.turkcewiki.org/w/index.php?title=Wikipedia:Purpose&oldid=1000827406"
This website is a mirror of Wikipedia, and is not affiliated with the Wikimedia Foundation.
Categories:
Hidden categories: