A piped link is an internal link with wikitext that creates hyperlinked (underlined, clickable) text displayed on a Wikipedia page that is different from the title of the page to which the text links. For example, the wikitext [[train station|station]] displays as station but links to the train station Wikipedia article.

Do not confuse piped links and redirects: they are two very different mechanisms. Both allow the displayed text of a link to differ from the title of the final destination page (the page that a reader will see after clicking that link). However, a piped link conceals the destination page's title only in that single line on the single page where its wikitext is used, while on any page throughout Wikipedia any link, piped or not, to a specific redirect page will always lead to the same destination page.

Piped links are useful for preserving the grammatical structure and flow of a sentence when:

To create the pipe ("|") character (also known as a vertical bar), you may press (⇧ Shift + Backslash) on English-layout keyboards. On Spanish keyboards the pipe character can be obtained by pressing (⇮ AltGr+1). More simply, note that the pipe character is the third character that appears in the "wiki markup" section of symbols at the bottom of the symbol page that appears in "edit this page" mode. Clicking on the pipe symbol there inserts it at the cursor spot, just as happens for any symbol chosen from this page. For full details on how to use this feature, see Help:Piped link.

When not to use[edit]

First of all, keep links as simple as possible:

Unnecessary piping makes the wikitext harder to read. Furthermore, the number of links to a redirect page can be a useful gauge of when it would be helpful to spin off a subtopic of an article into its own page, and such links would also continue to work correctly after the spin-off. For example: [[Leningrad]] currently redirects to Saint Petersburg, but one day it could be decided to spin off a dedicated article about the old city of Leningrad; when that happens, all existing links [[Leningrad]] will automatically point to the correct article, while the unnecessarily piped ones [[Saint Petersburg|Leningrad]] will not.

Both display identically as public transport. The first letter of Wikipedia wikilinks is never case-sensitive. 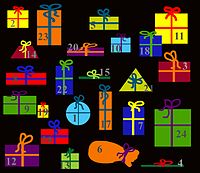 Wikipedia is not an Advent calendar, so don't tease the reader.
Shortcuts

Keep piped links as transparent as possible. Do not use piped links to create "Easter egg" links that require the reader to open them before understanding what's going on. Wikipedia is not an Advent calendar. Also remember there are people who print the articles. For example, do not write this:

...and by mid-century the puns and sexual humor were (with only a few [[Thomas Bowdler|exceptions]]) back in to stay.

The readers will not see the hidden reference to Thomas Bowdler unless they click or hover over the piped exceptions link. In a print version, there is no link to select, and the reference is lost. Instead, reference the article explicitly:

...and by mid-century the puns and sexual humor were (with only a few exceptions, such as [[Thomas Bowdler]]) back in to stay.

After an earlier disaster...

After an earlier disaster, the 1944 Bombay explosion, ...

It will occasionally be useful to link to a fuller explanation of a phrase; when this is done, link the phrase, not a single word.

If Pontiac's War is defined as having been

a war launched in 1763 by a loose confederation of elements of Native American tribes,

and there is no space for further explanation in that context (this is a quote from the lead of the article), then some readers will value a link to a description of the confederation. This should not be linked from the word confederation; the link in the following phrase:

looks like a link to the article Confederation. At a minimum, link something that wouldn't be the title of an article under our article title conventions:

a war launched in 1763 by a loose confederation of elements of Native American tribes.

Further, it is inappropriate to contain veiled and uncited interpretations of fiction through piped links, as in this excerpt from the The Iron Dream article, which contained over 30 interpretations hidden in links:

The pure and strong young "Trueman" (so named for the lack of mutations in his DNA) Feric Jaggar returns from the outlands of Borgravia where his family was exiled by the Treaty of Karmak with the surrounding mutant states to his ancestral land of Helder ("the High Republic of Heldon"; founded on the principles of killing mutants and keeping humanity pure), only to find its rigor slackened and corrupted by the "Universalists", pawns of the sinister Dominator country Zind, which seeks to corrupt Helder's pure human gene pool into the mutant diversity that rules the rest of the world.

Such interpretation, if properly sourced, should be placed in its own section and citations provided. If the interpretation is purely that of the editor, it is original research and should be removed.

In the case of a category link, a piped link overrides the alphabetical sort order of the article, as shown on the linked category page.

However, the actual Albert Einstein page has 83 category links. Piping every category link would be unattractive. As is standard for most "person" pages, that page uses {{DEFAULTSORT:Einstein, Albert}} to override the default sorting for category links. On that page, [[Category:Theoretical physicists]] places him in Category:Theoretical physicists as "Albert Einstein", and makes that category page sort him as "Einstein, Albert", without need of a piped link, and likewise for 81 other category links. That page uses one piped category link, [[Category:Einstein family|Albert]], to place him in Category:Einstein family and make (only) that category alphabetize him under "Albert".

The pipe character is also used when supplying parameters to templates; this is not the same thing as a piped link.

Retrieved from "http://en.turkcewiki.org/w/index.php?title=Wikipedia:Piped_link&oldid=928601107"
This website is a mirror of Wikipedia, and is not affiliated with the Wikimedia Foundation.
Categories: