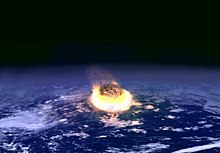 This meteor is making an impact; did the subject of your Wikipedia article?

Wikipedia's notability policy can be confusing and difficult to explain, especially to new users. The general notability guideline's requirement of significant coverage in independent reliable sources is simply an approximation for deciding whether an article topic is notable.

The concept of notability can also be described as a measure of the topic's impact, particularly with biographic articles. Think beyond the mere search for those multiple reliable sources that are independent of the subject. Instead, think like an historian: Why will this topic be remembered? How did it impact the community? What is different now because this happened? How does knowledge about this topic help us to explain the world around us? These notability-proving impacts don't have to be total paradigm shifts in human thought. In short: who cares and why?

When evaluating the notability of people who might be known for one event, can that person's biographical details help people understand that event? If so, they are possibly notable. If they are merely participants in the event itself, that person is probably not notable.

Retrieved from "http://en.turkcewiki.org/w/index.php?title=Wikipedia:Notability_means_impact&oldid=939870015"
This website is a mirror of Wikipedia, and is not affiliated with the Wikimedia Foundation.
Categories: