Wikipedia:Here to build an encyclopedia

Jump to navigation Jump to search
This page is about the purposes of this website. For use of the word "here" on Wikipedia's talk pages, see WP:Here (talk).

Wikipedia is an encyclopedia and the community of people who build it. It combines many features of general and specialized encyclopedias, almanacs, and gazetteers. Wikipedia is not a soapbox, an advertising platform, a vanity press, an experiment in anarchy or democracy, an indiscriminate collection of information, or a web directory. It is not a dictionary, a newspaper, or a collection of source documents, although some of its fellow Wikimedia projects are. 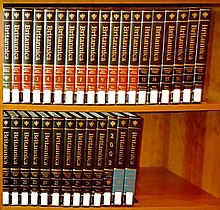 Wikipedia's goal is to create a well-written, reliable encyclopedia like the Encyclopædia Britannica ... except Wikipedia is much, much bigger: Britannica has about 120,000 articles, while the English Wikipedia has 6,140,302 articles.

A major pillar of Wikipedia is that it is both an encyclopedia and a community of editors who build it. This means that an editor is here primarily to help improve encyclopedia articles and content, and to provide constructive input into communal discussions and processes aimed at improving the project and the quality of our content, and do so in line with the project's intended boundaries, guidelines, and wider mission – and within compliance of Wikipedia's policies and procedures. Because Wikipedia is a collaborative community, editors whose personal agendas and actions appear to conflict with its purpose risk having their editing privileges removed.

The expression "here to build an encyclopedia" is a long-standing rule used to distinguish constructive and non-constructive users and pages. It has been written at various times into the Five Pillars of Wikipedia and older versions of the blocking policy.

Being here to build an encyclopedia[edit]

Signs that a user may be here to build an encyclopedia include:

Genuine interest and improvement
A genuine interest in improving the encyclopedic content (articles and media). This often involves a wide range of interests, and substantive edits/article writing or other significant activities (e.g., coding, patrolling, or wikignoming). It may also include significant constructive improvements to the processes that are involved in improving content, or mitigating and reducing problems that make a negative contribution to Wikipedia.
Respect for core editing standards
Behaving in accordance with core agreed policies when editing, including policies on content and behavior.
A focus on encyclopedia building
Non-encyclopedia-related contributions are kept to a limited level in comparison with positive and directly constructive contributions to the encyclopedia and/or its editorial processes.
Self-correction and heeding lessons
When mistakes are made, there is visible effort to learn from them. The user appears to take editing seriously and improves their editorial ability and quality of input.

Clearly not being here to build an encyclopedia[edit]

The following may indicate a user is clearly not here to build an encyclopedia:

Narrow self-interest or promotion of themselves or their business
Narrow self-interested or promotional activity in article writing (see WP:SPA).
Focusing on Wikipedia as a social networking site
A primary focus on Wikipedia as a social networking space (resumes, social media type pages, etc.). See WP:NOTSOCIALNETWORK for more information.
General pattern of disruptive behavior
A long-term history of disruptive behavior with little or no sign of positive intentions.
Trying to score brownie points outside of Wikipedia
Edits intended for the sole purpose of impressing or amusing third parties outside of Wikipedia, without expecting the edit to remain in place or caring if it doesn't. Examples include edits to articles related to one's religion, intended to score points with one's deity, or editing the name of one's significant other into the article for "beauty".
Treating editing as a battleground
Excessive soapboxing, escalation of disputes, repeated hostile aggressiveness, and the like, may suggest a user is here to fight rather than here to build an encyclopedia. If a user has a dispute, then they are expected to place the benefit of the project at a high priority and seek dispute resolution. A user whose anger causes them to obsess may find the fight has become their focus, not encyclopedia writing.
Dishonest and gaming behaviors
Gaming the system, socking, and other forms of editorial dishonesty. Wikipedia broadly works on a basis of trust, and such activities undermine that trust and suggest other motives such as "lulz" (amusement at destructiveness or schadenfreude) or a complete lack of interest in good editing conduct practices.
Little or no interest in working collaboratively
Extreme lack of interest in working constructively and in a cooperative manner with the community where the views of other users may differ; extreme lack of interest in heeding others' legitimate concerns; interest in furthering rather than mitigating conflict like disregarding polite behavior for baiting, blocking as a means of disagreeing, diverting dispute resolutions from objectives, driving away productive editors, or ownership of articles.
Major or irreconcilable conflict of attitude or intention
Major conflicts of attitude, concerning Wikipedia-related activity. A user may espouse extreme or even criminal views or lifestyle in some areas, or be repugnant to other users, and yet be here to "build an encyclopedia". However, some activities are by nature inconsistent with editing access, such as legal threats against other users, harassment, or actions off-site that suggest a grossly divergent intention or gross undermining of the project as a whole. Editors must be able to relax collegially together. Maintaining civility is essential in every exchange. There is a level of divergence of fundamental attitudes, whether in editing or to the project as a whole, at which this may not be reasonable to expect.
Long-term agenda inconsistent with building an encyclopedia
Users who, based on substantial Wikipedia-related evidence, seem to want editing rights only to legitimize a soapbox or other personal stance (i.e. engage in some basic editing not so much to "build an encyclopedia" as to be able to assert a claim to be a "productive editor"... when their words or actions indicate a longer-term motive inconsistent with "here to build an encyclopedia").
Having a long-term or "extreme" history that suggests a marked lack of value for the project's actual aims and methods
This may include repeated chances and warnings, all of which were flouted upon return, or promises to change that proved insincere, were gamed, or otherwise the word or spirit was not actually kept.
Interest in gaining as many user rights or "awards" as possible (or overly focusing on rights in general)
The user wants to gain as many awards as possible or focuses a lot of attention on gaining user rights through gaming the principles. While having awards is not negative overall, claiming them and user access levels as a right and not a privilege is damaging and not the goal of these things.
Editing only in user space
The user is only interested in editing their own user space or in draft space with no sign of making the draft live.

What "not here to build an encyclopedia" is not[edit]

Some users may be interested in building an encyclopedia in accordance with Wikipedia's principles, but with different areas of focus or approach to some other users' goals or emphases. Differences that arise where both users are in good faith hoping to improve the project should not be mistaken for "not being here to build an encyclopedia".

Focusing on niche topic areas
A user may have an interest in an obscure topic that other users find trivial or post contents that are difficult to comprehend. Diversity in interests and inputs from specialists in many fields help us function as a comprehensive encyclopedia. Even if you have never heard of a certain obscure school of 16th-century philosophy or a little-known physics theorem, if these topics have received significant coverage in reliable sources–even if those sources are printed books and specialist academic journals–then they merit a Wikipedia article.

Focusing on particular processes
A user may have an interest in creating stubs, tagging articles for cleanup, improving article compliance with the Manual of Style, or nominating articles for deletion. These are essential activities that improve the encyclopedia in indirect ways. Many "behind the scenes" processes and activities are essential to allow tens of thousands of users to edit collectively. Not every editor needs to perform "on stage", by creating articles and drafting new guidelines.

Advocating amendments to policies or guidelines
The community encompasses a very wide range of views. A user may believe a communal norm is too narrow or poorly approaches an issue, and take actions internally consistent with that viewpoint, such as advocating particular positions in discussions. Provided the user does so in an honest attempt to improve the encyclopedia, in a constructive manner, and assuming the user's actions are not themselves disruptive, such conversations form the genesis for improvement to Wikipedia.

Difficulty, in good faith, with conduct norms
A number of users wish to edit, but find it overly hard to adapt to conduct norms such as collaborative editing, avoiding personal attacks, or even some content policies such as not adding their own opinions in their edits. These would be dealt with through guidance, simplified suggestions on how to contribute or reediting the content to the style and standards of Wikipedia. In a small number of cases this may lead to a friendly block with warnings or even bans in some long term cases. Failure to adapt to a norm is not by itself, evidence that a user is not trying to contribute productively and some might require assistance so don't be inconsiderate.

Review behavior as a whole[edit]

Main articles: Vandalism on Wikipedia, Wikipedia:Please do not bite the newcomers, and Wikipedia:Postulate absence of malice

In an attempt to regulate edits that can have a surface appearance of vandalism, some editors may give in to tendentious editing. In this case, an editor should not engage in criticism of Wikipedia and should follow policies. They should not give in to impulsive instincts like guessing and engaging unpleasantly. A newcomer or a constructive user may at times make the occasional error, and they may need considerable time to acclimatize their conduct to the community's ways and norms. It is even possible for a well-rounded user to make mistakes. To err is human and it is an acceptable practice to admit when you are wrong and unappreciated to make it about winning for personal stat scores/ trophy collecting. In addition, a number of disruptive users may at times post nonconstructive edits only at intervals in order to avoid being blocked. Be bold in these cases, revert these edits, provide edit summary and for complex cases request administrator attention. Alternatively, if you are confident and have good dispute resolution and collaborative skills, attempt to solve minor conflicts at the article’s talk page. Be tolerant with the outcome, there is no deadline and the project is always a work in progress.

Being "here to build an encyclopedia" is about a user's overall purpose and behavior in editing Wikipedia. In considering whether or not a user is here to build an encyclopedia, the user's overall pattern of editing and contributing behavior, as well as the clarity of past warnings (dismissing vacuous warnings) or guidance and their attempts at improvement, should be reviewed as a whole.

Because Wikipedia is a community as well as an encyclopedia, the community tolerates a reasonable degree of non-encyclopedic content. Examples include certain humor pages that are not derogatory, userboxes, and a wide range of user page designs.

However, pages that stray too far outside this are frequently deleted under community processes. This is especially the case if it appears to the community that their primary author is not mainly here to write an encyclopedia. Examples include social network pages and promotional material in user-space, negative pages about other users, "laundry lists" of complaints, cliques and self-selecting or "restricted membership" user-created bodies, and non-project material likely to prove overly disruptive or divisive.

Retrieved from "http://en.turkcewiki.org/w/index.php?title=Wikipedia:Here_to_build_an_encyclopedia&oldid=972742403"
This website is a mirror of Wikipedia, and is not affiliated with the Wikimedia Foundation.
Categories: