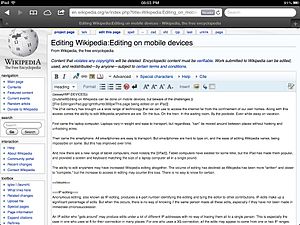 This page being edited on an iPad

The 21st century has brought technology that we can use to access the Internet far from home or desk. This lets us edit Wikipedia anywhere we are. On the bus. On the train. In the waiting room. By the poolside. Even while away on vacation.

First came the laptop computer. Laptops vary in weight and ease to transport, but regardless, can be moved around between places without hooking and unhooking wires.

Then came the smartphone. All smartphones are easy to transport, but the tiny glass screen is hard to type on, and the ease of editing Wikipedia varies, being impossible on some. But this has improved over time.

And now there are tablet computers. They have existed for some time, but the iPad made tablets popular, providing a screen and keyboard as big as on a small laptop computer, in a handy lightweight package now outsold by its many imitators.

The ability to edit anywhere may bring more editing. The volume of editing has declined as Wikipedia becomes more "finished", and there's no knowing whether greater access in editing will counter this loss.

Some mobile devices, including most smartphones, allow editing Wikipedia (see Wikipedia:Mobile access for more details). This enables many people to use otherwise wasted time while on the go. This convenience, however, comes with limitations and may leave poorer results. (For a more positive point of view and tips for effective smartphone editing, see Cullen328's essay Smartphone editing.)

Mobile devices lack a mouse, and some may not have the kind of touch screen interface that allows selecting toolbar icons. Some kinds of formatting may be tricky or impossible, but basic wiki markups are always available.

Some devices may not allow the user to see what they are typing, making it impossible to properly edit pages.

While most devices contain cameras, some cannot upload an image to Wikipedia or Wikimedia commons.

With the advent of iOS 6, it is now possible to upload an image to Wikipedia with any iOS device like iPhone and iPad. Android devices have always been able to do this. The user must first log in using the Desktop view.

Compatibility on mobile is limited. Wikipedia in mobile view does not show categories, nor most templates. Visual Editor on the mobile site does not work with iPad's default browser. Most Wikipedia videos do not move when seen in Windows RT phones and tablets.

Devices may choose to change common edit summaries or WP:SHORTCUTS into something potentially offensive or unintelligible at the last second as you add them, particularly if you are experiencing lag, causing experienced editors to appear as vandals. Some of these accidental changes cannot be deleted or repaired without administrative help. Be vigilant.

Anonymous editing, also known as IP editing, produces a long number tying the edit to other contributions. IP edits make up a significant percentage of edits, but provide no way to know whether the same person made them all, especially if some time has passed between them.

A mobile IP editor who uses Wi-Fi in many different places will produce edits under many different IP addresses and leave no way of tracing them all to a single person. For one who uses the phone's carrier connection, all the edits may appear to come from one or two IP ranges along with other editors.

Traceability is not a major problem when editing is done in good faith. However, a disruptive "mobile vandal" may become a problem.

IP editors using the mobile version of the Wikipedia website cannot see or edit Talk pages, so they cannot determine whether issues they notice in an article have been discussed already, cannot make suggestions, and generally cannot communicate with the Wikipedia community of editors.

Some people find editing from a phone to be slow, while others encounter no problems. With a small screen and no mouse, it can be hard for some to manipulate text onscreen. Editing text, cut and pasting, and even reading is slow for some. Make small edits to reduce edit conflicts, which can lead to losing all your new text. Losing a half-hour's typing can seriously sap your Wiki-morale. More frequent saves can reduce the risk.

Scrolling is common in the edit window. To reduce the amount of scrolling required, log in and edit your personal CSS with:

to increase the number from the similarly default 27. The link to your personal CSS "Custom CSS" is located in the 'Appearance' tab of 'Preferences', under the 'Skin' section.

Though code exists that will limit exceeding the height of the editing window and keep it to within the browser window, the following code will invalidate it:

Edits you may want to do on your mobile device

Many editors write fully referenced articles and carry out other sophisticated edits on mobile devices, using the desktop site. Although most editing can wait until you are at your regular computer if you find mobile editing problematic, there are some edits that you may want to do on your mobile device:

There are some specific user scripts for Minerva :

On many devices, apps for Wikipedia are available that use an Internet connection to read the most recent version of any article. Some, such as the official Wikipedia app, enable both reading and editing; others reading only. The editing feature lacks the WYSIWYG features of the Web site's WP:Visual Editor.

Help desk
Retrieved from "http://en.turkcewiki.org/w/index.php?title=Wikipedia:Editing_on_mobile_devices&oldid=942817945"
This website is a mirror of Wikipedia, and is not affiliated with the Wikimedia Foundation.
Categories:
Hidden categories: