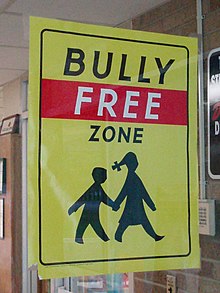 Cyberbullying is a global term that means the harassment of someone by use of electronic media, usually but not always social media. This essay is intended first to be editable by all as part of consensus forming on the processes Wikipedia should follow when cyberbullying has been identified or is suspected on Wikipedia. Following the building of consensus over those processes, the essay will be proposed as a guideline, perhaps as a policy. Cyber bullying is widely morally unacceptable, and most schools have a cyberbullying policy and conference.

How is this page different from Wikipedia's bullying information page?[edit]

Wikipedia has sound advice about bullying of editors by editors. While that is a form of cyberbullying, the WikiBullying essay does not address bullying against individuals who are not editors, and is also not a useful guide for a user trying to determine what Wikipedia does when cyberbullying of non-editors is suspected.

Typical presentation of cyberbullying on Wikipedia[edit] 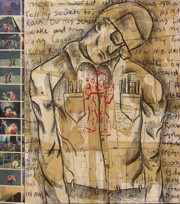 Cyberbullying can be of people who are not Wikipedia editors, and can cause DEATH or temporary loss of the esteem of one's peers

Often, but not always, the offending text is presented as what appears to be a genuine part of an article. An example might be in a school list of notable alumni the addition of the name of a current pupil in some manner, together with a defamatory, degrading, or disparaging remark. Examples might be:

As it stands one can easily form the view that this is online horseplay. Indeed, John Victim may have no issues with such comments; he may have a robust sense of humour and a strongly positive self-image.

A Wikipedia editor finding such an edit in an article has no idea about John Victim's state of mind. Nor does that editor know if this is a joke which John Victim will shrug off, or part of a campaign of unpleasantness.

How should an editor act on suspecting cyberbullying?[edit]

First and most important, treat it as a real personal attack made on and via Wikipedia against an unknown person who is in an uncertain state of mind. It is not simple vandalism; it is something potentially far more serious.

Where the text appeared in a school article[edit]

Having taken the actions described above, take the following further actions:

Retrieved from "http://en.turkcewiki.org/w/index.php?title=Wikipedia:Cyberbullying&oldid=938482966"
This website is a mirror of Wikipedia, and is not affiliated with the Wikimedia Foundation.
Categories: