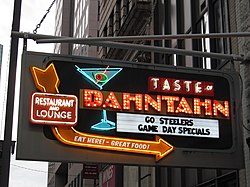 A sign using "Dahntahn" to mean "Downtown" in Downtown Pittsburgh.

Western Pennsylvania English, known more narrowly as Pittsburgh English or popularly as Pittsburghese, is a dialect of American English native primarily to the western half of Pennsylvania, centered on the city of Pittsburgh, but potentially appearing as far north as Erie County and Limestone, New York (north of Bradford), as far east as Sunbury, Pennsylvania,[citation needed] as far west as Youngstown, Ohio, and as far south as Clarksburg, West Virginia.[1][2] Commonly associated with the white working class of Pittsburgh, users of the dialect are colloquially known as "Yinzers".

Scots-Irish, Pennsylvania German, Polish,[3] Ukrainian[4] and Croatian[5] immigrants to the area all provided certain loanwords to the dialect (see "Vocabulary" below). Many of the sounds and words found in the dialect are popularly thought to be unique to Pittsburgh, but that is a misconception since the dialect resides throughout the greater part of western Pennsylvania and the surrounding areas.[6][7] Central Pennsylvania, currently an intersection of several dialect regions, was identified in 1949 by Hans Kurath as a subregion between western and eastern Pennsylvania,[8][9] but some scholars have more recently identified it within the western Pennsylvania dialect region.[9][10] Since Kurath's study, one of western Pennsylvania's defining features, the cot–caught merger, has expanded into central Pennsylvania,[11] moving eastward until being blocked at Harrisburg.[12] Perhaps the only feature whose distribution is restricted almost exclusively to the immediate vicinity of Pittsburgh is /aʊ/ monophthongization in which words such as house, down, found, and sauerkraut are sometimes pronounced with an "ah" sound, instead of the more standard pronunciation of "ow", rendering eye spellings such as hahs, dahn, fahnd, and sahrkraht.

Speakers of Pittsburgh English are sometimes called "Yinzers" in reference to their use of the second-person plural pronoun "yinz." The word "yinzer" is sometimes heard as pejorative, indicating a lack of sophistication, but the term is now used in a variety of ways.[13] Older men are more likely to use the accent than women "possibly because of a stronger interest in displaying local identity...."[14]

A defining feature of Western Pennsylvania English is the cot–caught merger, in which /ɑː/ (as in ah) and /ɔː/ (as in aw) merges to a rounded vowel: [ɔː~ɒː]. As in most other American dialects, it occurs as well as the father–bother merger.[6][7][15] Therefore, cot and caught are both pronounced [kʰɔːt~kʰɒːt]; Don and dawn are both [dɔːn~dɒːn]. While the merger of the low back vowels is also widespread elsewhere in the United States, the rounded realizations of the merged vowel around [ɒː] is less common, except in Canada, California, India and Northeastern New England.[6][7]

The /oʊ/ sound as in oh begins more fronted in the mouth, as in the American South or in Southern England. Therefore, go is pronounced [ɡɜʊ]. Similarly, /uː/ as in food and rude is fronted and often diphthongized, as in much of the American South, Midland, and West.

The diphthong /aʊ/, as in ow, is monophthongized to [aː] in some environments (sounding instead like ah), including before nasal consonants (downtown ['daːntaːn] and found [faːnd]), liquid consonants (fowl, hour) and obstruents (house [haːs], out, cloudy).[6][7][15] The monophthongization does not occur, however, in word-final positions (how, now), and the diphthong then remains [aʊ].[16] That is one of the few features, if not the only one, restricted almost exclusively to western Pennsylvania in North America, but it can sometimes be found in other accents of the English-speaking world, such as Cockney and South African English.[6][7] The sound may be the result of contact from Slavic languages during the early 20th century.[7] Monopthongization also occurs for the sound /aɪ/, as in eye, before liquid consonants,[6][7][15][17] so that tile is pronounced [tʰɑːɫ]; pile is pronounced [pʰɑːɫ]; and iron is pronounced [ɑːɹn]. That phenomenon allows tire to merge with the sound of tar: [tʰɑːɹ].

An epenthetic (intruding) /r/ sound may occur after vowels in a few words, such as water pronounced like warter [ˈwɔːɹtɚ], and wash like warsh [wɔːɹʃ].[6][7]

A number of vowel mergers occur uniquely in Western Pennsylvania English before the consonant /l/. The pair of vowels /iː/ and /ɪ/ may merge before the /l/ consonant,[6][7][15][18] cause both steel and still to be pronounced as something like [stɪɫ]. Similarly, /uː/, /oʊ/, and /ʊ/ may merge before /l/, so that pool, pull, and pole may merge to something like [pʰʊɫ]. On the /iːl/~/ɪl/ merger, Labov, Ash and Boberg (2006) note "the stereotype of merger of /ɪl ~ iːl/ is based only on a close approximation of some forms, and does not represent the underlying norms of the dialect."[19] The /iː/~/ɪ/ merger is found in western Pennsylvania,[6][7][15][18] as well as parts of the southern United States, including Alabama, Texas and the west (McElhinny 1999). On the other hand, the /uː/~/ʊ/ merger is consistently found only in western Pennsylvania. The /iː/~/ɪ/ merger towards [ɪ] may also appear before /ɡ/: eagle then sounds to outsiders like iggle.[6][7][15] The vowel /ʌ/ (as in uh) before /l/, may lower into the vowel of the cot–caught merger mentioned above, so that mull can sound identical to mall/maul: [mɔːɫ].

L-vocalization is also common in the Western Pennsylvania dialect; an /l/ then sounds like a /w/ or a cross between a vowel and a "dark" /l/ at the end of a syllable.[6][7][20] For example, well is pronounced as [wɛw]; milk as [mɪwk] or [mɛwk]; role as [ɹʊw]; and cold as [ˈkʰʊwd]. The phenomenon is also common in African-American English.

Western Pennsylvania English speakers may use falling intonation at the end of questions,[6][7][21] for example, in "Are you painting your garage?" (with pitch rising in intonation up to just before the last syllable and then falling precipitously).[21] Such speakers typically use falling pitch for yes-no questions for which they already are quite sure of the answer. A speaker uttering the above example is simply confirming what is already thought: yes, the person spoken to is painting his/her garage. It is most common in areas of heavy German settlement, especially southeastern Pennsylvania,[21] hence its nickname, the "Pennsylvania Dutch question", but it is also found elsewhere in Pennsylvania, including Pittsburgh[6][7][21] (Maxfield 1931; Layton 1999; Wisnosky 2003; Johnstone, Andrus and Danielson 2006). It is of German origin.[21] 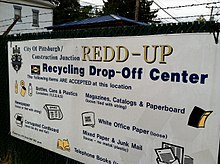 Retrieved from "http://en.turkcewiki.org/w/index.php?title=Western_Pennsylvania_English&oldid=971363320"
This website is a mirror of Wikipedia, and is not affiliated with the Wikimedia Foundation.
Categories:
Hidden categories: