Wake County is located in the U.S. state of North Carolina. As of July 1, 2019[update], the population was 1,111,761,[1] making it North Carolina's most populous county as well as the most populous county in the Carolinas. From July 2005 to July 2006, Wake County was the 9th fastest-growing county in the United States,[2] with the town of Cary and the city of Raleigh being the 8th and 15th fastest-growing cities, respectively.[3]

Its county seat is Raleigh,[4] which is also the state capital. Eleven other municipalities are in Wake County, the largest of which is Cary, the third largest city of the Research Triangle region and the seventh largest municipality in North Carolina.

Prior to English colonization, present-day Wake County was part of the Tuscarora nation.[5] 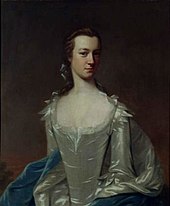 Wake County was formed in 1770 from parts of Cumberland County, Johnston County, and Orange County. The first courthouse was built at a village originally called Wake Courthouse, now known as Bloomsbury. In 1771, the first elections and court were held, and the first militia units were organized.

Wake County lost some of its territory through the formation of other counties. Parts were included in Franklin County in 1787, and in Durham County in both 1881 and 1911.

During the colonial period of North Carolina, the state capital was New Bern. For several years during and after the Revolutionary War there was no capital, and the General Assembly met in various locations. Fayetteville was the state capital in 1786, 1789, 1790, and 1793, when Raleigh became the permanent state capital in 1794.[6] In 1792, a commission was appointed to select a site to build a permanent state capital. The commission members favored land owned by Colonel John Hinton across the Neuse River, but the night before the final vote the committee adjourned to the home of Joel Lane for an evening of food and spirits. The next day, the vote went in Lane's favor.

Lane named Wake County in honor of Margaret Wake, wife of colonial Governor William Tryon.[7] Raleigh was named after Sir Walter Raleigh, and established in 1792 on 1,000 acres (4.0 km2) purchased from Lane. Raleigh had never set foot in North Carolina, but he had sponsored the establishment of the first English colony in North America on North Carolina's Roanoke Island in 1585. The city of Raleigh became both the state capital and the new seat of Wake County.

The Battle at Morrisville Station was fought April 13–15, 1865 in Morrisville, North Carolina during the Carolinas Campaign of the American Civil War. It was the last official battle of the Civil War between the armies of Major General William T. Sherman and General Joseph E. Johnston. General Judson Kilpatrick, commanding officer of the Union cavalry advance, compelled Confederate forces under the command of Generals Wade Hampton III and Joseph Wheeler to withdraw in haste. They had been frantically trying to transport their remaining supplies and wounded by rail westward toward the final Confederate encampment in Greensboro, NC. Kilpatrick used artillery on the heights overlooking Morrisville Station and cavalry charges to push the Confederates out of the small village leaving many needed supplies behind. However, the trains were able to withdraw with wounded from the Battle of Bentonville and the Battle of Averasboro. Later, General Johnston sent a courier to the Federal encampments at Morrisville with a message for Major General Sherman requesting a conference to discuss an armistice. Several days later the two generals met at Bennett Place near Durham on April 17, 1865, to begin discussing the terms of what would become the largest surrender of the war.

In November 2017, commissioners of Wake and Harnett counties discussed the possibility of redrawing the line between the counties using the latest technology. This could affect 27 homeowners who would end up in a different county or have their property divided between the two.[8] 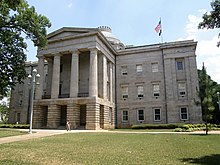 The county is governed by the Wake County Board of Commissioners, a seven-member board of County Commissioners, elected at large to serve four-year terms. Terms are staggered so that, every two years, three or four Commissioners are up for election. The commissioners enact policies such as the establishment of the property tax rate, regulation of land use and zoning outside municipal jurisdictions, and adoption of the annual budget. Commissioners meet on the first and third Mondays of each month.[9]

David Ellis is the County Manager.[9]

Wake County is a member of the regional Triangle J Council of Governments.

While North Carolina is historically a conservative state, Wake County is typically a swing voting area.

From 1828 to 1964, the county was won by Democratic presidential candidates in all but six elections (John C. Breckinridge in 1860, Ulysses S. Grant in 1868 and 1872, Rutherford B. Hayes in 1876, James A. Garfield in 1880, and Benjamin Harrison in 1888). From 1968 to 2004, Republicans won the county in every election but one, when Bill Clinton carried it in 1992. However, the races have almost always been close, such as in 1980, when Ronald Reagan won by a landslide nationwide, but by a mere one percent in Wake County. Recently, Republican George W. Bush won the county in 2000 with 53 percent of the vote and defeated John Kerry in 2004 by a slim 51 to 49 percent. In 2008 Democrat Barack Obama defeated John McCain 56 to 43 percent, becoming the first Democrat since Lyndon Johnson to win a majority of the county's vote. In 2012, Obama won Wake County again over Mitt Romney with 54 percent of the vote to Romney's 44 percent – the first time in almost half a century that a Democrat carried the county in consecutive elections. Obama's performance in Wake mirrored his strong showing along the I-85 Corridor. In 2016, Democratic nominee Hillary Clinton won the county 57 percent to Donald Trump's 37 percent, reflecting the nationwide shift towards Democrats in urban and suburban areas.[11][12]

Democrats fared well here in the 2008 election. In the 1998 Senate race, John Edwards won in Wake County, which helped him defeat incumbent Republican Lauch Faircloth. In 2000 Mike Easley won the governor's race here with 55% of the vote. In 2004, Easley won again, winning with 59 percent to 40 percent for opponent Patrick Ballantine. Democrat Beverly Perdue won Wake County in the 2008 Governor's election by a 51 to 45 percent margin. In 2002, Republican candidate for U.S. Senate Elizabeth Dole defeated Democrat Erskine Bowles with 55% of the vote in Wake County, and won by a large margin statewide. However, in 2004, Bowles won the county with 52 percent, despite losing statewide to Richard Burr by the same margin. In 2008 Kay Hagan defeated Dole 56 to 40 percent.

Wake County is located in the northeast central region of North Carolina, where the North American Piedmont and Atlantic Coastal Plain regions meet. This area is known as the "fall line" because it marks the elevation inland at which waterfalls begin to appear in creeks and rivers. As a result, most of Wake County features gently rolling hills that slope eastward toward the state's flat coastal plain. Its central Piedmont location situates the county about three hours west of Atlantic Beach, North Carolina, by car and four hours east of the Great Smoky Mountains.

Bodies of water that are located in Wake County include Lake Crabtree, Crabtree Creek, Lake Johnson, the Neuse River, and portions of Falls Lake and Jordan Lake.

The county, at the National Weather Service in Raleigh, receives on average 7 inches (180 mm) of snow in the winter. Freezing rain and sleet occur most winters, and occasionally the area experiences a major damaging ice storm.[16]

Wake County's economy is heavily influenced by the Research Triangle Park (RTP), located between Durham and Raleigh. RTP is the country's largest industrial park and a primary center in the United States for high-tech and biotech research, as well as textile development. The park is home to more than 160 companies employing over 50,000 people.[23] The largest employers in the Park include IBM (11,000 employees), GlaxoSmithKline (6,400 employees), and Cisco Systems (3,400 employees).[24]

Wake County's industrial base includes electrical, medical, electronic and telecommunications equipment; clothing and apparel; food processing; paper products; and pharmaceuticals. The agriculture industry is visible in rural areas of the county, with tobacco, cotton, wheat, soybeans, and corn being the most common products grown.

In 2007, Forbes magazine listed Raleigh and Cary among the best cities to find jobs in the United States,[26] as well as being the area ranked as the best place for business and careers.[27] Also in 2007, CNN ranked the region has the 3rd best area for job growth, the top region for technology workers,[28] and Bizjournals.com ranked it as the 4th best place for young adult job seekers.[29]

Public education in Wake County is administered by the Wake County Public School System, the 15th largest public school district in the country with over 155,000 students.[30] There are 27 high schools, 33 middle schools, 104 elementary schools, and 8 specialized schools. In addition, nine charter schools and 31 private schools are located in the county.

The Wake County Public Library system operates 22 branches throughout the county. There are 11 facilities in Raleigh. Cary and Apex each have two facilities. Holly Springs, Fuquay-Varina, Garner, Wake Forest, Zebulon, Knightdale and Wendell each have one library facility. The Wake County library system keeps books, periodicals, and audio books and has recently expanded the selection to include downloadable e-books.[31]

The North Carolina Museum of Art, occupying a large suburban campus on Blue Ridge Road near the State Fairgrounds, houses one of the premier public art collections between Washington, D.C. and Atlanta. In addition to collections of American art, European art, African Art, and ancient art,[32] the museum recently has hosted major exhibitions featuring Auguste Rodin (in 2000) and Claude Monet (in 2006–07), each attracting more than 200,000 visitors.[33][34] The museum is currently hosting a special exhibition of contemporary installation art called You Are Here: Light, Color, and Sound Experiences.[35] Unlike most public museums, the North Carolina Museum of Art acquired a large number of the works in its permanent collection through purchases with public funds. The museum's outdoor park is one of the largest such art parks in the country.[36] 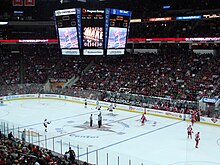 The National Hockey League's Carolina Hurricanes franchise moved to Raleigh in 1999 from their temporary home of Greensboro, after having departed Hartford, Connecticut, in 1997. Their home arena, the PNC Arena, also hosts concerts and other public events. The Hurricanes are the only major league (NFL, NHL, NBA, MLB) professional sports team in North Carolina to have won a championship, winning the Stanley Cup in 2006, over the Edmonton Oilers.

North Carolina FC of the United Soccer League and the affiliated women's team North Carolina Courage of the National Women's Soccer League are located in Cary and play at the WakeMed Soccer Park. The Courage is the reigning NWSL Shield Winner and NWSL Champion, breaking the NWSL season record for most wins, points, and goals in the process.[37]

The Carolina Mudcats are a minor league baseball team located in eastern Wake County. Their ballpark, Five County Stadium, is located in Zebulon.

North Carolina State University, which is a member of the Atlantic Coast Conference (ACC) and National Collegiate Athletic Association (NCAA) Division I, plays their home basketball games at the PNC Arena and home football games at Carter–Finley Stadium.

The Raleigh Cú Chulainn, which includes a Hurling team and a Gaelic football team, is based in Wake County. The football team won the 2014 Men's Junior Championship in North American Gaelic Athletic Association competition.

Because of the area's many billiards rooms, Raleigh is home to one of the largest amateur league franchises for playing pool, the Raleigh, Durham, Chapel Hill American Poolplayers Association. There are leagues available in eight-ball, nine-ball, and Masters formats for players of any skill level.

The USA Baseball National Training Complex is located in Cary. 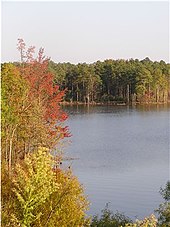 There are 152 county parks, city parks, public swimming and public tennis facilities in Wake County. In addition, there are 53 community centers.[46] Notable parks include Pullen Park and Yates Mill Park. The American Tobacco Trail is a 22-mile (35 km) rail trail project that is located in the Research Triangle Park region. Fifteen miles of the trail is located in Wake County and is open to pedestrians, cyclists, equestrians (in non-urban sections), and other non-motorized users. 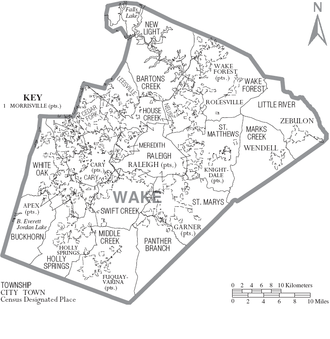 Retrieved from "http://en.turkcewiki.org/w/index.php?title=Wake_County,_North_Carolina&oldid=994722096"
This website is a mirror of Wikipedia, and is not affiliated with the Wikimedia Foundation.
Categories:
Hidden categories: