Vijaya Lakshmi Pandit (née Swarup Nehru;[2] 18 August 1900 – 1 December 1990) was an Indian diplomat and politician who was the 6th Governor of Maharashtra and 8th President of the United Nations General Assembly, the first woman appointed to either post. Hailing from a prominent political family, her brother Jawaharlal Nehru was the first Prime Minister of independent India, her niece Indira Gandhi the first female Prime Minister of India and her grand-nephew Rajiv Gandhi was the sixth Prime Minister of India. Pandit was sent to London as India's most important diplomat after serving as Nehru's envoy to the Soviet Union, the United States and the United Nations. Her time in London offers insights into the wider context of changes in Indo–British relations. Her High-Commissionership was a microcosm of inter-governmental relations.[3]

Vijaya Lakshmi's (born Swarup)[2] father, Motilal Nehru (1861–1931), a wealthy barrister who belonged to the Kashmiri Pandit community,[4] served twice as President of the Indian National Congress during the Independence Struggle. Her mother, Swaruprani Thussu (1868–1938), who came from a well-known Kashmiri Pandit family settled in Lahore,[5] was Motilal's second wife, the first having died in child birth. She was the second of three children; Jawaharlal was eleven years her senior (b. 1889), while her younger sister Krishna Hutheesing (b. 1907-1967) became a noted writer and authored several books on their brother.

In 1919, she secretly married Syud Hossain, a Muslim journalist and later first Indian Ambassador to Cairo,[6] but Mahatma Gandhi and, family members like Pandit Nehru, separated the couple.[7][8][9][10][11]

In 1921, she was married to Ranjit Sitaram Pandit (1921–1944), a successful barrister from Kathiawar, Gujarat and classical scholar who translated Kalhana's epic history Rajatarangini into English from Sanskrit. Her husband was a Maharashtrian Saraswat Brahmin, whose family hailed from village of Bambuli, on the Ratnagiri coast, in Maharashtra. He was arrested for his support of Indian independence and died in Lucknow prison in 1944, leaving behind his wife and their three daughters Chandralekha Mehta, Nayantara Sehgal and Rita Dar.

Gita Sahgal, Nayantara's youngest child, is the writer and journalist on issues of feminism, fundamentalism, and racism, director of prize-winning documentary films, and human rights activist, is one of her granddaughters. 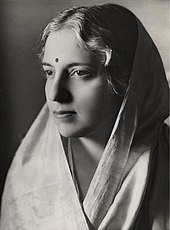 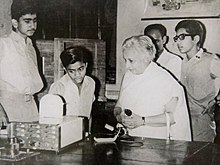 Pandit as a Chief Guest at The Doon School, Dehradun, in the 1960s.

Pandit was the first Indian woman to hold a cabinet post in pre-independent India. In 1937, she was elected to the provincial legislature of the United Provinces and was designated minister of local self-government and public health. She held the latter post until 1938 and again from 1946 to 1947. In 1946, she was elected to the Constituent Assembly from the United Provinces.

Following India's freedom from British occupation in 1947 she entered the diplomatic service and became India's ambassador to the Soviet Union from 1947 to 1949, the United States and Mexico from 1949 to 1951, Ireland from 1955 to 1961 (during which time she was also the Indian High Commissioner to the United Kingdom), and Spain from 1958 to 1961. Between 1946 and 1968, she headed the Indian delegation to the United Nations. In 1953, she became the first woman President of the United Nations General Assembly[12] (she was inducted as an honorary member of the Alpha Kappa Alpha sorority in 1978 for this accomplishment[13]).

Hon. Members that Shrimati Vijaya Lakshmi Pandit has resigned her seat in the House with effect from 17 December 1954.[14]

In India, she served as Governor of Maharashtra from 1962 to 1964, after which she was elected to the Indian parliament's lower house, Lok Sabha, from Phulpur, her brother's former constituency from 1964 to 1968. Pandit was a harsh critic of Indira Gandhi's years as Prime Minister especially after her niece had declared the emergency.

Pandit retired from active politics after relations between them soured. On retiring, she moved to Dehradun in the Doon Valley in the Himalayan foothills.[15] She came out of retirement in 1977 to campaign against Indira Gandhi and helped the Janata Party win the 1977 election.[16] She was reported to have considered running for the presidency, but Neelam Sanjiva Reddy eventually ran and won the election unopposed.[17]

In 1979, she was appointed the Indian representative to the UN Human Rights Commission, after which she retired from public life. Her writings include The Evolution of India (1958) and The Scope of Happiness: A Personal Memoir (1979). 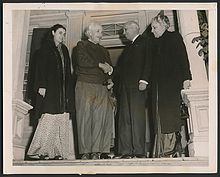 She was the member of Aligarh Muslim University Executive Council.[18] She never received any formal education.

Retrieved from "http://en.turkcewiki.org/w/index.php?title=Vijaya_Lakshmi_Pandit&oldid=1093523498"
This website is a mirror of Wikipedia, and is not affiliated with the Wikimedia Foundation.
Categories:
Hidden categories: