Video 2000 (also known as V2000, with the tape standard Video Compact Cassette, or VCC) is a consumer videocassette system and analogue recording standard developed by Philips and Grundig to compete with JVC's VHS and Sony's Betamax video technologies.[1] Designed for the PAL colour television standard (some models additionally handled SECAM), distribution of Video 2000 products began in 1979 exclusively in Europe, South Africa and Argentina and ended in 1988.[2]

Video 2000 was presented at the International Radio Exhibition in Berlin in 1979 and succeeded Philips's earlier Video Cassette Recording (VCR) format and its derivatives (VCR-LP and Grundig's SVR).[citation needed] Although some early models and advertising featured a mirror-image 'VCR' badge based on the older systems' logo, Video 2000 was an entirely new (and incompatible) format that incorporated many technical innovations.[3] Despite this, the format was not a major success and was eventually discontinued, having lost out to the rival VHS system in the videotape format war.

Despite the name, VCCs are marginally larger than VHS cassettes—shorter, but thicker and deeper.[5][6] They have two co-planar reels containing half-inch (12.5mm) wide chromium dioxide magnetic tape. The format utilised only half (6.25 mm) of the half-inch tape on a given 'side', and so it is occasionally referred to erroneously as a quarter-inch tape format despite its physical tape width. The cassette can then be flipped over to use the other half of the tape, thus doubling playing time.[7]

The tape is totally enclosed when not in use. Unlike competing formats that have spaces in the cassette for the tape loading mechanism to be inserted, thus exposing the delicate magnetic tape surface, VCCs have a retractable sheath that covers such space. The sheath is retracted as a tape is inserted into the machine and only then can the tape cover be raised to fully expose the tape.

While VHS and Beta tapes have a break-off tab to protect recordings from erasure (as in audio Compact Cassettes and, once broken, the cavity left by the missing tab must be covered or filled before the tape can be reused), VCCs employ a reversible solution: a switch on the tape edge can be turned to red/orange to protect the recordings, and back to black/brown (depending on the color of the cassette housing) to re-record. The switch covers/uncovers a hole along the tape edge which is detected by a sensor in the machine.

The tape edge features six such holes along each side of the tape, detected by sensors on the cassette's underside. The left-hand cluster includes the write-protection hole. The right-hand cluster of three is used (by various permutations of open/closed status) to tell the machine the total tape running time. This was employed in second generation machines such as Grundig's Video 2×4 Super to provide a real-time tape counter: upon insertion of the tape the machine moves the tape forward and then backward by a small amount and monitors the comparative angular speed of the reels. This is looked up in a data table for the known total tape length and the hours and minutes used are then displayed. A similar technique was later used on Video8, MiniDV and MicroMV cassettes. Some later VHS machines also featured this ability although it did not work with VHS-C cassettes. NOTE: When Grundig began marketing VHS recorders, its VS2XX series machines employed a similar system, whereby barcoded stickers attached to the tape edge indicated the total tape length to the machine so that it could calculate the time used.

A hole between the two spools enables a pin in the VCR to pass right through the cassette. This pin releases ratchets within the cassette that prevent the tape accidentally becoming slack in transit. The VCR's eject function includes a tape tensioning action prior to the cassette being ejected.

Dynamic Track Following (DTF) eliminated the need for a separate control track, and enabled the video heads to accurately follow the recorded tracks on the tape during playback. Therefore, by design V2000 machines do not require a video tracking control[8] (however, Grundig's model 1600 lacked DTF). During record, a sequence of four pilot frequencies (one for each head in the drum) is recorded with the video signal. During playback, if a video head reads an adjacent track, it will also read the corresponding pilot frequency; the control circuitry will generate a voltage of up to ± 150 volts, which is applied to the piezo-electric material on which the video heads are mounted, thus pushing them up or down as needed to accurately follow the right track. This system guarantees that each head will read exclusively their track (i.e., no noisebars) at up to seven times normal speed forwards, and fives times in reverse. VHS developers JVC later introduced a so-called "Dynamic Drum" in a few top-of-the-range devices.

V2000 is able to play both fields of the image in still frame mode, providing full vertical resolution whereas VHS and Betamax could only reproduce one field, giving only half of the normal vertical resolution. A real advantage of DTF on all but the very first V2000 models is the ability to provide picture search without noise bars across the screen, a feature domestic VHS or Betamax machines were only ever able to approach by introducing complex multi-head drums.

At the time of its launch, Video 2000 also offered several innovative features unmatched by the competing formats VHS and Betamax:

Linear stereo sound was available on some models, though both VHS and Betamax were offering hi-fi stereo sound with near-CD quality by the mid 1980s.

The Philips VR2020 was the first mass-marketed model for the Video 2000 format sold in the United Kingdom.

A key intention of the V2000 format, thanks to DTF, was tape compatibility. A tape from any machine should play perfectly on any other machine. Unfortunately, when the VR2020 reached the shops it was discovered that its audio head was 2.5mm out of position compared to that on Grundig's Video 2×4. This meant that the sound would be out of sync with the picture when played back on the other type of machine. Both manufacturers' production lines hastily moved the audio head 1.25mm to a common position, but compatibility issues remained for recordings made on the first generation of machines.[9] Furthermore, the required close tolerances and fragility of the DTF system resulted in significant inter-machine compatibility issues which were never fully resolved.

Furthermore, there were initially some compatibility issues with the tape interchange, allegedly even with the lap synchrony, if cassettes recorded with Philips equipment were to be played on Grundig machines.

Although Philips and Grundig agreed on a common tape format, they came up with machines that were radically different mechanically. Building on its experience with VCR, Grundig machines featured a Betamax-style loading ring to gently pull the tape around the video heads in a "U-wrap" over all three generations of their recorders, which was effective, simple and economical.

Philips, however, used an "M-wrap" similar to that in VHS machines. Cables pulled pins along tracks in order to pull the tape into the transport path. This drive was large, heavy and very complex to produce, although having the head drum, capstan, audio/erase heads and the respective drive motors all mounted on a common base plate meant it was produced to high tolerances. Philips referred to this assembly as the "microworld". Second and third generation Philips drives replaced the cable-pulled pins with a reliable lever mechanism.

In addition, first and second generation Grundig recorders had a high failure rate due to thin-walled plastic connectors between the drive and the motor connection board. 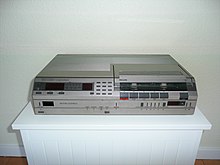 Compared to VHS, production costs were a big problem with Video 2000. For their second-generation series, Philips developed a completely new drive, with the tape pulled against the heads in an formation by pins on lever arms. This drive was very compact, with very high quality and (compared to VHS) very fast response times, but still had five direct-drive motors (head drum, capstan, two belt drive and a threading and cassette compartment). Due to their compact nature, these last Philips drives were quite expensive to service but defects in the mechanism are quite rare, except for the rubber pressure roller which is easy to change.

Other improvements include reduced outer dimensions and weight and addition of a SCART audio/video connector.

Philips and Grundig intended Video 2000 to improve on the perceived failings of the VHS and Betamax formats whilst providing the potential for further developments. However, the format was withdrawn before many of these possibilities appeared on the market.

The prototype Video Mini Cassette was a compact version of the VCC (analogous to VHS-C) that was playable in existing machines using a full-sized cassette adaptor. Published photos clearly show the nomenclature VMC120, suggesting that 60 minutes per side were possible (compared to 20 minutes total initially for VHS-C), but Philips retired Video 2000 before the development was ready for market. The 108 × 72 × 21 mm Video Mini Cassette was somewhat larger than VHS-C's (92 × 59 × 23 mm). However, the cassette—as well as the adaptor—left the tape noticeably exposed to mishandling.

Hi-fi sound was never marketed although photos of the Philips VR2870 were published in 1985, shortly before the format's demise. This would have recorded pulse-code modulated (PCM) audio in the data track, offering the format another advantage over VHS/Beta as the hi-fi track would be independent of the visuals, and so could be re-recorded or dubbed as became possible later with Video8.

Rumours also circulated in the press of an auto-reverse machine shortly before the format was retired. Technically this would have been a major challenge to enable a single head drum to scan both 'sides' of the tape at the correct angle.

Alongside the write-protect hole were two that were never used. One was slated to indicate the tape formulation as higher coercivity tapes were to be introduced for the "Super 2000" hi-band version of the format. The flexibility of this system also allowed for metal tape to be introduced for the digital version "Digital 2000", also in the early stages of development as the format was canceled. Internal documents suggested the cassette abbreviations VSC and VDC to be used, respectively, for the two developments.

Although Video 2000 was technologically superior to the competition in several ways, it could not compete with VHS and Betamax's key advantages:

In 1985 Grundig started development and production of VHS recorders alongside V2000, and in 1986 Philips announced that it would discontinue the manufacturing of Video 2000 recorders, focusing instead on VHS exclusively. Their first home-grown VHS recorder—VR6560—was virtually a clone of the VR2324, using the VHS format tapes and the usual VHS M-wrap. Curiously, when Philips launched its second-generation home-grown VHS recorders (VR6467, VR6760, etc.) they pioneered the VHS 'U-wrap' (known colloquially as the "Charly" deck) and this was used in many Philips-built machines well into the first half of the 1990s. Grundig also used U-wrap in its own VHS decks for a short while before using Panasonic-manufactured decks. 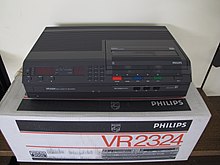 Recorders in the format were manufactured by Philips and Grundig and marketed additionally by Pye, ITT, Bang and Olufsen, Aristona, Erres, Radiola, Siera and Siemens.

Retrieved from "http://en.turkcewiki.org/w/index.php?title=Video_2000&oldid=942473125"
This website is a mirror of Wikipedia, and is not affiliated with the Wikimedia Foundation.
Categories:
Hidden categories: