Writing was not used in pre-Columbian times, a historical stage where various groups began to move throughout the Americas, thus making it difficult to find evidence of the people who began to populate this land. However, archaeological excavations show evidence of certain periods that were taking place on the continent.

Venezuela was probably first settled by humans 16,000 years ago, due to migration flows from other indigenous cultures of America, from the south to the Amazon, from the west through Los Andes and north by the Caribbean Sea.

There are four periods of diversity that develop in the current Venezuela, which also entering a new period, it did not mean the end of the previous.

The first migrations to the continent were probably from East Asia to 15,000 years. C. These early migrants (called forth by the generic name "Indians") came at first to be located in North America, later moving to the territory of present Venezuela. Now for their offspring, it was clear verify the Asian features on their faces that will adapt to the climate and lifestyle.

During this period, various mammals were disappearing by climatic changes already beginning to take place from 5000 years ago, so the population in the mainland, starts to move towards the coast and spread to some nearby islands, trying to find new feeding alternatives.

On August 2, 1498 (516 years), Christopher Columbus, and the Spanish colonizers ships, landed for the first time in American mainland and did so in the current Venezuelan territory. With the rapid colonization process despite small local indigenous rebellions, the Spaniards manage to conquer the territory, beginning during this period the most significant crossbreeding process that will define later the social profile of the country.

With the passage of time, and the introduction of the African continent, a third race, the Africans, started to integrate into the population, creating heterogeneity in the faces of the society of the time.

During colonial centuries in Venezuela began to settle the "peninsular whites", coming directly from the Iberian Peninsula and which were those who held positions in the crown, representing only 15% of the population. Another group of whites who were born in Venezuela were originally called "Creole", representing 20% of the population: they were mostly from the Canary Islands and they worked mainly in petty trade. The other two smaller groups were the original inhabitants and indigenous blacks brought from Africa: they were about 5% of the population. Soon the original groups started to have interbreedings and this created a process of "fusion" between the different racial groups: The "brown" were descendants of the unions between Whites, Indians and Blacks and by the 18th century were the largest racial and social group being more than 60% of the population.

This process is currently responsible for the majority of Venezuelans who are of mixed race.

Venezuelans of German descent from Colonia Tovar in Aragua state.

The country has a diverse population that reflects its rich history and the people that have lived here since antiquity to the present. The historic amalgam of different principal groups form the basis of the current demographics of Venezuela: the European immigrants, the Amerindian peoples, African, Asian, Middle Eastern and other recent immigrants.

Many of the indigenous peoples were absorbed by the mixed population, but the remaining 500,000 currently represent more than 85 different cultures.

European immigrants were mainly Spanish colonists, but another large and growing number are descendants of Europeans (Portuguese, Italians, Germans and Americans) who migrated to the region in mid-twentieth century during the oil growth in the country. Small numbers are descendants of French, English and Polish, as they emigrated during World War II and the Cold War.

Black Africans were brought as slaves, mostly coastal lowlands, beginning early in the sixteenth century and continuing into the nineteenth century. Other immigrant populations are Asian and Middle East, particularly Lebanon, Syria and the Arab world, some Jews from southern Spain, Israel and Central European nations, East Asians like Chinese and Japanese, Dominicans, Haitians, Cubans, Peruvians, Argentinians, Uruguayans, Chileans, Ecuadorians and Colombians, this being the greatest social impact due to a large number of displaced individuals who entered the Venezuelan territory during the armed conflict in that country; which generated a high supply of labor, personnel and domestic economy informal.

Currently, according to the critic D'Ambrosio and other academics,[23] about 51.6% of Venezuelans are mestizos or mulattos (called Criollos: the 40% of them are with mostly white features, 20% with mostly black features and 10% with mostly Indians features), 45% are white, 2% are black and 1% Indians.

Notably, according to these scholars, is the fact that virtually there are no pure whites, blacks nor indigenous people in Venezuela. With the exception of direct descendants of immigrants or specific indigenous tribes.

In addition, according to a genetic autosomal DNA study conducted in 2008 by the University of Brasilia (UNB), the composition of the population of Venezuela is: 60.60% European, 23% of Native American contribution and 16% of Africa's contribution.[9]

Venezuelans in a protest against the Bolivarian Revolution in São Paulo, Brazil.

Venezuelans in the world

The population of approximately 28 million people (in 2011) [24] made Venezuela the sixth-most populous country in Latin America (after Brazil, Mexico, Colombia, Argentina and Peru). Approximately more than one million (4-6% of the total population) are living in other countries.[25] 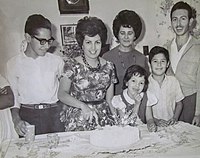 The country has a diverse population that reflects its colorful history and the peoples that have resided there throughout. The historic amalgam of the different main groups forms the basics of Venezuela's current demographics: European immigrants, Amerindian peoples, Africans, Asians, Middle Easterners and other recent immigrants. The autosomal DNA genetic composition of population in Venezuela, is 60.60% of European contribution, 23% of indigenous contribution, and 16.30% of African contribution.[9]

Moreno (Mestizo) population of Venezuela in 2011.

White population of Venezuela in 2011.

Amerindian population of Venezuela in 2011.

Black and Afrodescendant population of Venezuela in 2011.

Many of the indigenous peoples were absorbed into the Mestizo population, because of the heavy mixture of European and African people. They represent over half of the country's population (about 51.6%).[22]

Venezuelan children's of Scandinavian ancestry.
Main articles: European Venezuelan and History of the Jews in Venezuela

The European immigrants were mostly Spanish colonists, but a high number of other Europeans brought by the past high growth from Portuguese, Italian, and German immigrants to the region in the middle 20th century by the Petroleum Growth, and in much smaller numbers French, English, Polish, Russian, Greek, Scandinavian, Romanian, Ukrainian and Hungarian communities immigrated during the Second World War and the Cold War. 300,000 Italians and an equal numbers of Spaniards immigrated in the 1940s and 1950s, and earlier who were fleeing from the Spanish Civil War (1930s).

They are concentrated though almost half of Venezuela's land area that lies north of the Orinoco (where the 95% vast majority of Venezuelans live), principally in important urban areas like Greater Caracas, Maracaibo, Maracay, Valencia, Lecheria, Barquisimeto/Cabudare, Colonia Tovar, Punto Fijo; the Andean States, Margarita Island and Araya Peninsula.[26] They represent almost half of the population (43.6%).[22]

Black Africans were brought as slaves, mostly to the coastal lowlands, beginning early in the 16th century, and continuing into the mid 19th century. Although they are located in almost the entire country, the Black and African population are concentrated in places where they used to be slaves and worked as farm hands on subsistence farms of plantains, cocoa, tobacco, sugar cane and cotton in the Aroa Valley, Litoral varguense, Eastern Falcon state; Gibraltar, Bobures and Palmarito in the Sur del Lago Region; and in areas where slaves would run away during Colonial Venezuela and formed cumbes, communities in mountainous and isolated areas, such as, the Sierra de Falcón, Barlovento Region (Acevedo, Andrés Bello, Brión, Buroz and Páez municipalities), Ocumare de La Costa, Choroní; El Callao and Paria Peninsula (where Afro-Trinidadian also migrated); and through Los Llanos, well dispersed in small to decent percents. They represent 3.6% of the population.[22]

Before the Spanish colonization of the region that would become the country of Venezuela, the territory was the home to many different indigenous peoples. Today more than fifty different indigenous ethnic groups inhabit Venezuela. Most of them speak languages belonging to the Arawakan, Cariban, and Chibchan languages families. Pure indigenous Amerindians comprise around 2 percent of the population.[27] There are 101 languages listed for Venezuela in the Ethnologue database, of which 80 are spoken today as living languages. Today, they're mostly located south of the Orinoco, in the Guayana Region, an area that covers half of the country but the population represents just 2.7% of Venezuelans; other important regions where they're located are on Zulia state, Apure state, the Eastern Region and Orinoco Delta.

Arab immigration to Venezuela started as early as the 19th and 20th centuries. They came mostly from Lebanon, Syria, and Palestine. They are mostly located in the most important urban areas and Margarita Island, representing around 5% of the population in Venezuela.[28]

Israel has been chosen by many Venezuelan Jews, along with the United States and other countries.[29]

According to the Venezuelan Institute of Statistics, about one million Venezuelans have Syrian origins and more than 20,000 Venezuelans are registered in the Venezuelan Embassy in Damascus.[30] Other sources stated that there is around 60,000 Syrian-Venezuelans living in Syria.[31] More than 200,000 people from the Sweida area carry Venezuelan citizenship and most are members of Syria's Druze sect, who immigrated to Venezuela in the past century.[32]

The largest sub-groups are immigrants or descendants of immigrants from Mainland China, India, Japan and Korea. The first wave of immigrants began in 1847 and consisted of mainly Cantonese immigrants; then the second wave during beginning of the 1940s and 1950s, consisted of Chinese and Japanese immigrants;[33] reaching a peak in the mid-1970s in connection with the oil boom, where Korean[34][35] and Indian immigrants (mostly Indo-Caribbeans) formed a new group to the country. Asian people represent around 1% of the Venezuelan population.

The Chinese in Venezuela are the 4th largest diaspora in the Americas after the United States, Canada and Peru.

Retrieved from "http://en.turkcewiki.org/w/index.php?title=Venezuelans&oldid=947939565"
This website is a mirror of Wikipedia, and is not affiliated with the Wikimedia Foundation.
Categories:
Hidden categories: