A page from an Uzbek book printed in Arabic script. Tashkent, 1911.

The Uzbek language has been written in various scripts: Latin, Cyrillic and Arabic. In Uzbekistan, it is officially written in the Latin script, though most people still write in Cyrillic. In the Xinjiang region of China, some Uzbek speakers write using Cyrillic, while others apply the Uyghur Arabic script for Uzbek. Uzbeks of Afghanistan also write the language using the Arabic script and the Uzbek Arabic script is currently taught at some schools in the country.

Like all Turkic languages in Central Asia, Uzbek was written in various forms of the Arabic script such as Yana imla by the literate population. Between 1928 and 1940, as part of comprehensive programmes to educate (and politically influence) Uzbek people, who for the first time now had their own cartographically delineated (administrative) region, Uzbek writing was switched to Latin script (Yanalif; a proposal for the latinization of Yana imla was already developed in 1924). The Latinization of Uzbek was carried out in the context of Latinization of all Turkic languages.[1]

In 1940, Uzbek was switched to the Cyrillic script under Joseph Stalin. Until 1992, Uzbek continued to be written using a Cyrillic alphabet almost everywhere, but now in Uzbekistan the Latin script has been officially re-introduced, although the use of Cyrillic is still widespread. The deadline in Uzbekistan for making this transition has been repeatedly changed.

In 2018, the Uzbek government launched yet another reform for the Uzbek Latin alphabet. According to the new proposal, some digraphs shall be replaced by diacritical signs.[3] This was met with mixed reactions from the citizens who preferred "writing in Cyrillic alphabet instead"; the deadline for the official Latin script reform is 2021.[4] On May 22, 2019, an updated version of the Uzbek Latin alphabet was revealed, with five letters being updated; it was proposed to represent the sounds "ts", "sh", "ch", "oʻ" and "gʻ" by the letters "c", "ş", "ç", "ó" and "ǵ", respectively.[5] This reverses a 1995 reform, and brings the orthography closer to that of Turkish and also of Turkmen, Karakalpak, Kazakh and Azerbaijani.[6]

The symbol ⟨ʼ⟩ does not constitute a separate letter.

Below is a table of Uzbek Cyrillic and Latin alphabets with represented sounds.[7] 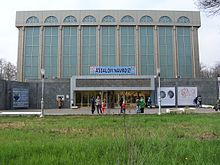 When the Uzbek language is written using the Latin script, the letters Oʻ (Cyrillic Ў) and Gʻ (Cyrillic Ғ) are properly rendered using the character U+02BB ʻ MODIFIER LETTER TURNED COMMA[9], which is also known as the ʻokina. However, since this character is absent from most keyboard layouts (except for the Hawaiian keyboard in Windows 8, or above, computers) and many fonts, most Uzbek websites – including some operated by the Uzbek government[2] – use either U+2018 ‘ LEFT SINGLE QUOTATION MARK or straight (typewriter) single quotes to represent these letters.

The modifier letter apostrophe (ʼ) (tutuq belgisi) is used to mark the phonetic glottal stop when it is put immediately before a vowel in borrowed words, as in sanʼat (art). The modifier letter apostrophe is also used to mark a long vowel when placed immediately after a vowel, as in maʼno (meaning).[10] Since this character is also absent from most keyboard layouts, many Uzbek websites use U+2019 ’ RIGHT SINGLE QUOTATION MARK instead.

Article 1 of the Universal Declaration of Human Rights:

Retrieved from "http://en.turkcewiki.org/w/index.php?title=Uzbek_alphabet&oldid=953344265"
This website is a mirror of Wikipedia, and is not affiliated with the Wikimedia Foundation.
Categories:
Hidden categories: