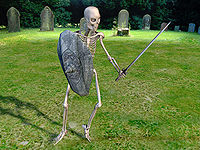 A reconstruction of a Peloponnesian soldier, based on archeological excavations

By comparing basic vocabulary across the established families of oral languages of the world, we have been able to reconstruct the Proto-Human language. We find that all reconstructed words are *na. An extension of this method to additional lexical items (in other basic word lists) finds that those items also reconstruct to *na. We therefore conclude that the ancestral human population used the word *na for everything.

Cf. How likely are chance resemblances between languages?

From the math ref desk:

break up Li'o language per classification

does Baloi language not belong in libi1251 Ngiri language?

I, Ling.Nut award this very overdue Linguist's barnstar to Kwamikagami. Thanks for making the Internet not suck.

I, Ikiroid, award this Barnstar to Kwami for helping me with effectively editing language pages.
Retrieved from "http://en.turkcewiki.org/w/index.php?title=User:Kwamikagami&oldid=947579935"