Uno (formerly UniversityBus) is an English bus service operated by the University of Hertfordshire, serving members of the general public, and also its own students and staff. The service was set up in 1992, growing out of a shuttle service previously operated for students at Wall Hall College located near Watford connecting them to the other campuses of the University and the Polytechnic (Hatfield) before that.

It provides student transport to the university from local areas as well as improving east-west travel across Hertfordshire and has opened up new links from North London. Services have expanded as the University has closed outlying sites at Watford and Hertford and developed the new de Havilland Campus on the site of the former Hatfield Aerodrome, Hatfield. Other developments on this site, including business premises for companies such as Veolia, DHL and EE Limited have also provided passengers. Uno also operate urban bus networks in St Albans and Northampton, as well as a network of routes between Milton Keynes, Bedford and Flitwick for Cranfield University. 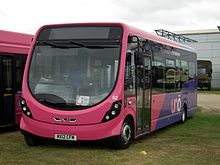 Wright StreetLite at Showbus in September 2012

Uno was set up as an 'arm's length' company by the University of Hertfordshire in 1992. It has its own Board of Directors and is expected to run on a fully commercial basis.

In 2005 it was re-branded Uno and the buses were repainted pink and purple, a departure from the previous grey and white livery. According to the University's student newspaper Universe, the reason for the re-branding "is to have a name that reflects the wider market the buses serve in the community, basically not just for the inhabitants of the University of Hertfordshire".

Shortly after purchasing the St Albans operations of Centrebus in 2008, Uno helped to found a voluntary partnership of local authorities, the university and the bus and rail operators serving the city with the aim of co-ordinating and improving public transport across St Albans. The partnership uses powers under the most recent Transport Act as a Quality Network Partnership but is known publicly as 'Network St Albans'. Uno is currently the second largest bus operator in Hertfordshire.

On 20 April 2009, Uno recast many of its services to integrate a number of the former Centrebus routes. Further changes took place on 28 September 2009, following the opening of the new University Of Hertfordshire Forum. These changes included improvements to late evening services and the extension of operating hours until as late as 3:30am for a select few routes. The main timetable change each year takes place in September to coincide with the start of the school, college and university academic year.

In September 2013, Uno began operating a small network of routes between Milton Keynes, Bedford and Flitwick for Cranfield University.[2] On 25 July 2015, Uno became a contracted Transport for London operator when it commenced operating route 383.[3]

In November 2016, Uno's Northampton operations were shortlisted for the Top Independent Operator award in the national UK Bus Awards; they finished as a finalist.[4]

In November 2018, Uno were shortlisted for several awards in the UK Bus Awards and won two - Marketing Initiative of the Year for the 'Comet' route (614/644) and Leadership & Inspiration for the MD, Jim Thorpe.[5]

In April 2009, several former Centrebus services were integrated into the main network (mainly as services 620 and 621) while one further route (304) provided under contract to Hertfordshire County Council was transferred to Arriva Shires & Essex.

In March 2010, a number of the routes around Hatfield and Welwyn Garden City, that only ran a couple of times a day or on one day a week, were lost to Sullivan Buses.[6] The evening 620 service contract was also lost to Arriva Shires & Essex. The 694 service, introduced in September 2009 as a park and ride service between College Lane and Stanborough Lakes in WGC, was axed completely.

In March 2015, Uno took the 797 Greenline route that previously operated from Stevenage to London Victoria (Green Line Coach Station) on, operating a shortened version of the route between London and Hatfield, on weekdays.[9][10] The service was withdrawn the following year. 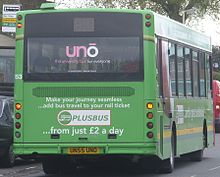 A promotional bus advertising the PlusBus ticketing scheme in June 2010

Uno operates from a garage purpose built in 2003 at Gypsy Moth Avenue, Hatfield Business Park. Following the takeover of Centrebus' St Albans operations, Uno continued to operate them from the St Albans garage. However, this was subsequently closed and operations consolidated into Hatfield.

As a result of winning the Northampton University contracts a depot has opened at the Park Campus of the university by September 2012. A similar arrangement also operates at Cranfield University following initiation of services between Milton Keynes and Bedford in September 2013.

In September 2017 Uno launched a fleet of six brand-new, high specification buses on the 614/644 route between Hatfield and North London.[11] The new buses are E400 City double deckers, made by Alexander Dennis.

At the end of May 2018, Uno started operating six brand-new single decker buses made by MCV (MCV Bus and Coach) on Volvo's B8RLE chassis. The buses were branded 'Dragonfly', in reference to Hatfield's aircraft heritage, and allocated to route 610 (Luton - Hatfield - Cockfosters). The buses feature WiFi, USB charging sockets, on-board stop announcements and an innovative sofa at the front.[12]

In February 2019, further investment by the company saw a fleet of 8 buses launched under the 'Tigermoth' brand for the 653 route - each bus named after the first eight female pilots from the Air Transport Auxiliary (ATA) - Joan Hughes, Margaret Cunnison, Mona Friedlander, Rosemary Rees, Marion Wilberforce, Margaret Fairweather, Gabrielle Patterson, and Winifred Crossley Fair - who were based at Hatfield in the Second World War.[13]

The company participates in various county-wide ticketing schemes where appropriate, such as Plusbus (discounted combined rail and bus tickets), Intalink Explorer (a ticket allowing unlimited travel around Hertfordshire), and discounted travel for children with a Hertfordshire SaverCard.

The company have their own mobile ticketing app, which allows passengers to buy their ticket before they travel and pay with credit or debit cards.

Retrieved from "http://en.turkcewiki.org/w/index.php?title=Uno_(bus_company)&oldid=938406570"
This website is a mirror of Wikipedia, and is not affiliated with the Wikimedia Foundation.
Categories:
Hidden categories: