Jump to navigation Jump to search
For the university founded in 1640, see The Royal Academy of Turku.
For the current Swedish-speaking university in Turku, see Åbo Akademi.
For the vocational university, see Turku University of Applied Sciences.

The University of Turku (in Finnish Turun yliopisto, in Swedish Åbo universitet, shortened in UTU), located in Turku in southwestern Finland, is the third largest university in the country as measured by student enrollment, after the University of Helsinki and Tampere University. It was established in 1920 and also has facilities at Rauma, Pori, Kevo and Salo. The university is a member of the Coimbra Group.

The Royal Academy of Turku[edit]

The first university to be established in Turku was The Royal Academy of Turku, in 1640, which was transferred to the new Capital, Helsinki, after the Great Fire of Turku in 1827.

Three famous Finns began their studies in Turku in 1822. These were Johan Vilhelm Snellman, Elias Lönnrot, and Johan Ludvig Runeberg who have a statue on University Hill. Another reminder of the Royal Academy is the Old Academy Building near the University's campus.

The grand opening of the University of Turku in 1922. On the left is Artturi H. Virkkunen [fi], the first rector of the university

The modern University of Turku was founded in 1920. The Finnish intelligentsia wanted a purely Finnish university, the first of its kind in Finland. 22,040 people contributed to the fund-raising campaign. Newly gained independence and the campaign are reflected in the motto of the University about a free people's gift to free science. To honour the memory of these donors, the University has named its specially created liqueur "22 040". Developed by the University's own food chemists, the liqueur does homage to some of the distinctive fruits of the Finnish landscape: the cloudberry, the rowan and the sea buckthorn.

The first premises of the University of Turku were in the centre of the city, by the market square. In the 1950s a new campus was built on Ryssänmäki [fi] (Russian Hill[3] – now known as University Hill). In the 1960s the University started to expand rapidly, a process that still continues.

The University was made a public institution in 1974.[4]

Since 1995 the University of Turku has been a member of the Coimbra Group.

In January 2010, the Turku School of Economics merged with the University of Turku, forming a seventh faculty of the university.[4]

The University has approximately 20,000 students, of which 5,000 are postgraduate students having completed their MSc or MA. The largest faculties are the Faculty of Humanities and the Faculty of Science and Technology. 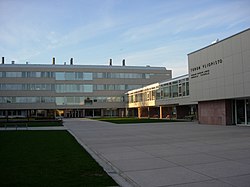 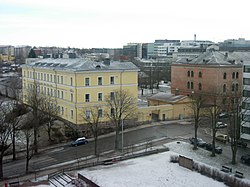 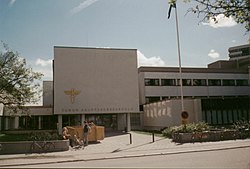 The university management consists of the Board, The Rector and the vice rectors and the University Collegiate Council.

The Board is the highest decision-making organ of the University and is made up of 10 individuals[5] both from academia, society and studentship. It develops the University's operating processes and approves plans concerning its financing and activities; it decide on the guidelines of granting appropriations; it give its opinion in any matters of significance that concern the University in principle and the Board approves the service regulations and other similar rules.

The University Collegiate Council consists of 30 members: ten professors, ten other teaching and research personnel and other staff and ten students.[7]

The university is divided into seven faculties. All departments and some of their research units are listed under the faculty header.

The university also has number of independent units not affiliated with the faculties:[13]

The University of Turku shares a campus with Åbo Akademi University and elements of Turku Science Park. The area also encompasses Turku University Hospital (TYKS) and the Student Village. The Main Building and the surrounding complex was built in the fifties on what became to be known as the University Hill. The campus is constantly expanding, the latest example is the Medisiina D building which houses the facilities of the Faculty of Medicine. The University also owns the Botanic Garden at Ruissalo as well as the research station at the Island of Seili.

As defined in the strategy,[15] the University's multidisciplinary strengths in research are biofuture; digital futures; cultural memory and social change; children, young people and learning; drug development and diagnostics; and sea and maritime studies.

The University of Turku has been involved in many research projects in the Peruvian Amazon. With the Peruvian Amazon Research Institute (Instituto de Investigaciones de la Amazonía Peruana – IIAP), based in Iquitos, has been studying the Amazon in the BIODAMAZ Project.

Retrieved from "http://en.turkcewiki.org/w/index.php?title=University_of_Turku&oldid=958047309"
This website is a mirror of Wikipedia, and is not affiliated with the Wikimedia Foundation.
Categories:
Hidden categories: