The university was ranked 59th in the world, according to Academic Ranking of World Universities (ARWU) in 2017.[7] In April 2013, according to the results of the International Student Barometer, the University of Groningen, for the third time in a row, was voted the best university of the Netherlands.[8] 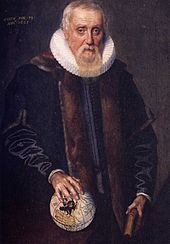 The institution was founded as a college in 1614 in an initiative taken by the Regional Assembly of the city of Groningen and the Ommelanden, or surrounding region. There were four faculties – Theology, Law, Medicine, and Philosophy.[12][13][14]

The coat of arms of the university was confirmed by The Estates of the City and County of Groningen in 1615. It consists of the provincial arms, charged with an open book inscribed with the abbreviated words VER/BVM/DNI LV/CER/NA, short for Verbum Domini Lucerna Pedibus Nostris. The shield is surmounted by a golden crown of five leaves and four pearls.

The first 75 years of its existence were very fruitful for the University with about 100 students enrolling every year. Almost half of the students and lecturers came from outside the Netherlands – the first rector magnificus, Ubbo Emmius, came from East Frisia in modern-day Germany, for instance – but at the same time there was already a close relationship between the University and the city and the surrounding region.

The development of the University came to a standstill at the end of the seventeenth and during the eighteenth century because of theological differences of opinion, a difficult relationship with the Regional Assembly and political problems that included the siege of the city by ‘Bommen Berend’ in 1672. On average two to three hundred students were registered with the University at any one time during this period. Petrus Camper, though, was a shining academic example during the second half of the eighteenth century and was famous far beyond the city limits as an anatomist, a fighter against rinderpest and the founder of the first outpatient’s clinic for surgical medicine. 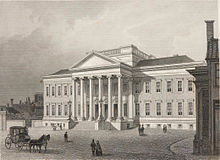 Opportunities and threats followed each other during the nineteenth century. During the French occupation between 1775 and 1814 the University of Groningen was administrated by the Imperial University of Paris. Unlike Leiden University, it was not shut down and the institute was renamed Imperial University of Groningen (Keizerlijke Universiteit Groningen). During this time period, it remained the only open University in the Kingdom of Holland.[15] In 1815 after the Napoleonic Wars, at the same time as Leiden and Utrecht, the University gained recognition as a national college of higher education, but this was followed by discussions about closure. The situation improved markedly when a new main university building, the Academiegebouw, was constructed in 1850, a building that was largely financed by the people of Groningen. This made the fire that completely destroyed this building in 1906 even more poignant.

In the meantime, the Higher Education Act of 1876 had radically improved the position of the University, which was renamed the "Rijksuniversiteit Groningen" (RUG). Teaching took place in Dutch and Latin and the University was given a research as well as an educational duty.

In March 2015, the RUG signed an agreement with the China Agricultural University to establish a campus in the Chinese city of Yantai. This would have made the RUG the first Dutch university to open a campus in China.[16] The plan was heavily criticised, mainly due to worries about the restriction of academic freedom caused by censorship in China.[17] In January 2018, the plans were cancelled by the Executive Board of the UG, based on the "insufficient support for the project".[18]

In 2016 the Dutch chemist Ben Feringa, who has spent most of his career at the University of Groningen, won the Nobel prize for his work on molecular motors.[19]

Key facts and figures about the University of Groningen are:[3]

The University of Groningen is in the top 3 of European research universities in the fields of Ecology, Material Sciences, Chemistry and Astronomy. Other strong research groups are in Nanoscience, Physics, Molecular Biology, Microbiology, Medical Sciences, Neurosciences, Sociology, Philosophy, Theology, Archaeology and Arts.

The university operates under the BSA system, under which a first year undergraduate (bachelor) student must achieve a certain number of ECTS in order to progress to the second year. This varies from 30 ECTS to 45 ECTS among various degrees.[25]

The University of Groningen is a member of the so-called Excellence Group of the best universities in Europe. The Excellence Group has 56 members, which is 1.3 percent of the approximately 4,500 European institutions of higher education.[26]

The university's Center for Information Technology (CIT) houses an IBM Blue Gene/L supercomputer and data center of Target used by the LOFAR project as well as a Virtual Reality and 3D-visualisation center.[36] 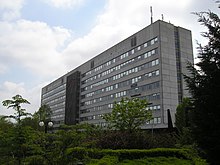 Harmonie building of the Faculty of Arts 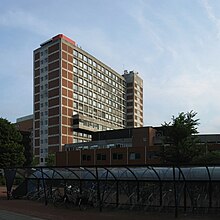 Linnaeusborg (Faculty of Science and Engineering) 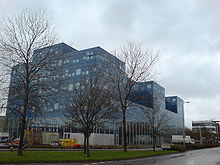 Bernoulliborg (Faculty of Science and Engineering) 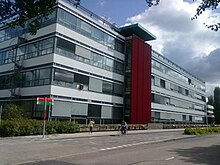 Faculty of Science and Engineering 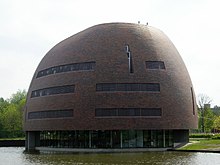 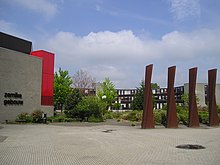 The University of Groningen is organized in eleven faculties that offer programmes and courses in the fields of humanities, social sciences, law, economics and business, spatial sciences, life sciences, and natural sciences and technology. Each faculty (cf., College in the USA or School in Europe) is a formal grouping of academic degree programmes, schools and institutes, discipline areas, research centres, and/or any combination of these drawn together for educational purposes. Each faculty offers Bachelor's, Master's, PhD, and Exchange programmes, while some also offer short certificate courses.

The various faculties are housed around the city. Most of the faculties- including the faculties of Law, Arts and Philosophy are located in and around the city center. The university's original building, which acts as the main administrative building, lies exactly in the center of the city at the Broerstraat. The faculty of medical sciences is located close-by at the University Medical Center Groningen(UMCG). The Faculties of Economics and Business, Spatial Sciences, and Science and Engineering are housed in the northern outskirts of the city, at the Zernike Campus, named after Nobel Prize winner Frits Zernike. The Zernike campus is also shared by the Hanze University of Applied Sciences, the other big university in the city, making the total number of students studying there around 40,000.[39]

The university has libraries in three locations: the main one at the city center, one in the Duisenberg building in Zernike Campus, and one in the faculty of medicine, that includes a vast array of books and online material for students. The library at the city center also has a Starbucks on its premises. The university has also recently opened another campus in Leeuwarden, Friesland, referred to as "Campus Fryslan", that offers multiple disciplines in both undergraduate and postgraduate levels.[40]

The city of Groningen boasts a remarkable student life, and is known as the student city of the Netherlands; around one-third of the city's residents are students at either The University of Groningen or at the Hanze University of Applied Sciences. The city is tailored around students, and is known to be very welcoming.[citation needed] The university, through ACLO,[41] offers a wide range of sporting activities, and courses. Almost each sport has its own association, and offers the use of its facilities at discount rates for students.[42]

The university, also has multiple student societies that organize social events for its members, as well as student and study associations, that are mostly concerned with specific faculties and courses.

The use of bicycles as the means for transport is particularly prevalent for locals and students alike, and has integrated, labelled bike paths from the city center to Zernike. The city is popularly referred to as "The World Cycling City" because of this.[43]

The University of Groningen, much like most universities in Europe, does not have student accommodation themselves. It does, however, offer students with accommodation via SSH Student Housing, which operates student houses in various locations in Groningen, and various other cities within the Netherlands. [44] A significant number of students live in private accommodations within the city, however. A recent addition to the housing options for students is The Student Hotel as well. The Dutch government has strict laws for private accommodations for both tenants (students) and the landlords, so that fair rent prices, and renting conditions can be maintained.[45]

In 2018, the university received national attention due to the housing crisis in the city of Groningen. Due to the fact that most incoming students at the university are primarily from other parts of the country, or the world, there has been a lack of housing options for students.[46]

Notable alumni of the University of Groningen include:[63]

Retrieved from "http://en.turkcewiki.org/w/index.php?title=University_of_Groningen&oldid=959714836"
This website is a mirror of Wikipedia, and is not affiliated with the Wikimedia Foundation.
Categories:
Hidden categories: