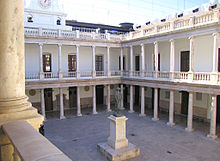 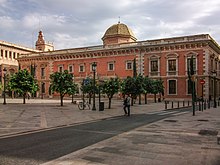 The University of Valencia's Historic Building

The University of Valencia (Valencian: Universitat de València [univeɾsiˈtad de vaˈlensia]; also known by the acronym UV) is a university located in the Spanish city of Valencia. It is one of the oldest surviving universities in Spain, and the oldest in the Valencian Community, and is regarded as one of Spain's leading academic institutions. The University was founded in 1499, and currently has around 55,000 students. Most of the courses are given through the medium of Spanish, but the university has promised to increase the number of courses available in Valencian. Moreover, in some degrees part of the teaching is in English.

There are three campuses:

At the request of James I the Conqueror, Pope Innocent IV in 1246 authorized (by a Bull) the establishment of estudis generals in Valencia. The University Statutes were passed by the municipal magistrates of Valencia on April 30, 1499; this is considered to be the 'founding' of the University. In 1501, Pope Alexander VI signed the bill of approval and one year later Ferdinand II the Catholic proclaimed the Royal Mandatory Concession.

Its foundation was due to the zeal of St. Vincent Ferrer and to the donation of a building by Mosen Pedro Vilaragut. Only very meagre accounts have been preserved of the practical workings of the university. From the time of its foundation the courses included Latin, Greek, Hebrew, Arabic, philosophy, mathematics, and physics, theology, Canon law, and medicine. 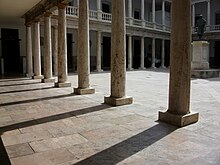 The closing years of the seventeenth, and the whole of the eighteenth century, witnessed the most prosperous era of the university, Greek, Latin, mathematics, and medicine being specially cultivated. Among the names of illustrious students that of Tosca, Evangelista Torricelli's friend, noted physicist and author of important mathematical works, stands out prominently. Escolano says that it was the leading university in mathematics, the humanities, philosophy, and medicine. Large anatomical drawings were made by the students. Valencia was the first university of Spain to found a course for the study of herbs. Many of the Valencian graduates of medicine became famous. Pedro Ximeno discovered the third small bone of the ear. He was professor at Alcalá and had for a pupil the celebrated Vallés. Luis Collado, professor of botany, made some valuable discoveries and carried on exhaustive studies of the plants of the Levant; Vicente Alonzo Lorente wrote works on botany; and the famous botanist Cavanilles was also a student of this university.

In the seventeenth century the university divided into two factions, the Thomists and the anti-Thomists. The discussions were heated and aroused partisan feelings throughout the entire Kingdom of Valencia. The university possessed a library of 27,000 volumes which was destroyed by the soldiers under the command of General Suchet. Among the most noted professors of the university was D. Francisco Pérez Bayer, a man of wide culture and great influence in the reign of Charles III of Spain. Around the university several colleges for poor students sprang up: the first was founded by St. Thomas of Villanova in 1561 and then followed those founded by Doña Angela Alonsar, and Mosen Pedro Martín. The most famous, called Corpus Christi, was founded by Blessed Juan de Ribera; Philip II founded that of San Jorge; and Melchor de Villena founded the last in 1643. During the Spanish Civil War, in 1938, a fire badly damaged the library.[1]

Nowadays it is a modern European public university open to almost every branch of teaching, research and learning in humanities, basic sciences and technology, health sciences, social sciences, and education.

The University of Valencia has three main urban campuses located in Valencia city and in Burjassot-Paterna, and some other buildings and facilities in the hearth of Valencia town, such as the Historic Building, Botanical Garden, Cerveró Palace, the Rectorate and others. 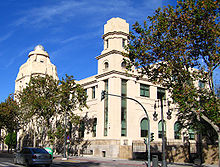 The University of Valencia's Rectorate

The University of Valencia has 18 Schools and Faculties located in its three main campuses. Each one allocates different academic departments and offers undergraduate, official masters and PhD programs.

Studying at the University of Valencia[edit]

The University of Valencia offers degrees in almost all of the academic fields: arts and humanities, engineering, health sciences, sciences, and social sciences.

The exchange programs with foreign universities, as well as other programs of International Cooperation and Development Aid, allow students to study in other academic institutions from Europe, North America, Latin America, and Asia. Regarding student mobility through Erasmus program, it is among the top ten universities in Europe. The university has partnered with International Studies Abroad, a study abroad provider based in Austin, Texas, to bring inbound students from the United States and Canada.[2]

Research is conducted through several ways. The Academic Departments within each School, the Research Institutes, the Science Park and some others.

The Research Institutes are conceived as multi-disciplinary research structures beyond the framework of the departments; they aim to meet the demand of the economic and social context in the research and transfer fields.

Retrieved from "http://en.turkcewiki.org/w/index.php?title=University_of_Valencia&oldid=965699833"
This website is a mirror of Wikipedia, and is not affiliated with the Wikimedia Foundation.
Categories:
Hidden categories: