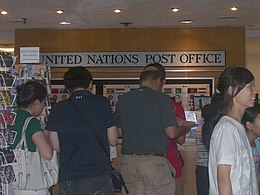 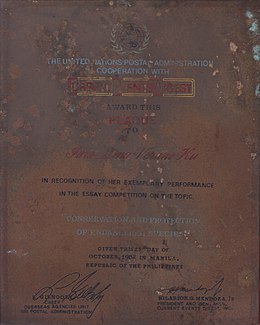 The Administration has a dual mandate: first, to disseminate information on the activities and achievements of the United Nations system through the medium of postage stamps, and second, to generate revenue for the organization.[2]

United Nations stamps, in the appropriate currency, are only valid for postage when used on mail at certain United Nations offices. The three facilities that accept these stamps are the UNPA offices at: United Nations Headquarters, the Palais des Nations and Vienna International Centre.[3]

On 4 September 2007, the UNPA posted on its Web page new rules limiting the mailings it will accept. Express mail and Priority Mail are no longer available to the public, and mailings from the public are limited to 100 pieces. The UNPA stated that the reason for this is that it was not established to provide all postal services, and that its primary function was to issue stamps for philatelic purposes.[citation needed]

Finally, on 16 November 1950, the General Assembly formally created the Postal Administration and asked the Secretary-General to appoint a committee to design the first United Nations stamps.[8]

The Postal Service was formally inaugurated on United Nations Day in 1951, with its first set of stamps also going on sale that day.

The UNPA issued its first stamps for the New York offices in 1951. There was intense collector interest in the early issues, and a million stamps or more were sold of many of the early commemoratives. The scarcest item from this period, although still quite affordable, is the UN 10th anniversary souvenir sheet, Scott #38, of which 250,000 were printed. A precancel of the first 1½-cent stamp that was used on a number of mass mailings has been extensively forged.

By 1957, the UNPA's commemoratives regularly sold out, though they might take several months to do so. Faced with this success, officials increased print runs from the usual million stamps to as many as five million. Surprisingly, sales increased tremendously, and sales of each commemorative stamp remained in the 1.5 to 3 million range through the 1970s.

In 1967, the UNPA issued five stamps in Canadian dollar denominations for use at the United Nations pavilion at Expo 1967 in Montreal, Quebec. They became invalid when Expo 1967 closed.

In 1968, the UNPA made an agreement with Swiss postal authorities, and on 4 October 1969[9] began to issue stamps in franc denominations for use at the Geneva offices. A 1979 agreement with Austria led to similar stamps for Vienna.[10]

There was a resurgence of interest in UN stamps in the 1970s, which may have peaked with the almost immediate sellout of the panes of 20 issued for the UNPA's 25th anniversary—three of the four denominations sold out on the date of issue (8 October 1976); the fourth sold out within two and a half months. A similar issue, in 1979, for the International Year of the Child sold out on the day of issue. The story made the front page of The New York Times. In 1980, the first of an annual series depicting members' national flags sold nearly 3.5 million of each individual stamp.

The controversial 1981 United Nations stamp focusing on the "Inalienable Rights of the Palestinian People".

In 1981, interest began to diminish after controversy erupted concerning the UNPA's issuance of stamps for the "Inalienable Rights of the Palestinian People".[citation needed] The proposal for issuance, and the issuance itself, was extensively and critically covered by The New York Times and by Linn's Stamp News. The fifteen cent denomination became the first UNPA stamp since 1954 to sell fewer than a million copies when more than a million were printed. By 1983, many more stamps were selling fewer than a million copies, though sales of Vienna stamps remained strong. In 1986, the souvenir sheet for the World Federation of United Nations Associations became the first issue to sell fewer than a half-million copies where at least that many were printed in UNPA history.

In an effort to increase sales, the UNPA used a combination of smaller printings of stamp issuances, aggressive marketing, and having famous artists create stamp designs. Still, stamp sales have never recovered to previous levels and today print runs are on the order of 400,000 stamps. Due to these lower printing quantities, the stamps from the late 1990s and 2000s are harder to find on the discount postage market. Although it is rare, some issues have sold out. The most notable of regularly issued UN stamps is the 2005 General Assembly 60th Anniversary Souvenir Sheet, of the one dollar denomination, which is currently being sold by stamp dealers for more than 10 times its original face value.

In 2003, the UN Postal Administration began issuing "personalized" sheets for New York. These sheets have ten or twenty stamps and a large decorative border, with a tab to the right of each stamp. Visitors to the UN Building in New York can go to a kiosk where a personal picture can be printed onto a sheet with blank tabs. Most "personalized" sheets are produced for stamp shows and specific UN events with related designs already printed on the tabs. Truly personalized sheets rarely reach the secondary market.

The UN Post Offices in Geneva and Vienna began offering this type of sheet in 2009. Two sheets were produced in 2007 and two in 2008 denominated in Euros. The editors of the Scott Catalog question whether they were ever actually sold at the UN Post Office in Vienna, a primary criterion for recognizing them as a legitimate postal issue. The Scott Catalog lists them as footnotes without assigned catalog numbers.

The UNPA continues to issue stamps, including personalized stamps. It is responsible also for sorting and delivery of mail to the offices under its jurisdiction.

A recent controversy concerns the 2003 purchase by one organization of the UNPA's entire postal archive, including original artwork and artist's proofs. Apparently this was to raise money for the UNPA, and it may have netted the organization about $2.5 million. However, there have been serious allegations that improper procedures approving the sale were followed. Also, resale of items at several times their initial values have apparently occurred, thus raising more questions about the entire matter. As of 2006 the issue remains under internal UN investigation.[11]

Retrieved from "http://en.turkcewiki.org/w/index.php?title=United_Nations_Postal_Administration&oldid=951597747"
This website is a mirror of Wikipedia, and is not affiliated with the Wikimedia Foundation.
Categories:
Hidden categories: