Jump to navigation Jump to search
This article is about the Australian online service. For other uses of the word "trove", see trove (disambiguation).

Trove is an Australian online library database aggregator; a free faceted-search engine hosted by the National Library of Australia,[1] in partnership with content providers including members of the National & State Libraries Australasia.[2] It is one of the most well-respected[3] and accessed GLAM services in Australia, with over 70,000 daily users.[4][5]

Trove's origins can be seen in the development of earlier services such as the Australian Bibliographic Network.[6] It was originally known as the Single Business Discovery Service, a project that was launched in August 2008.[7] The intention was to create a single point of entry for the public to the various online discovery services developed by the library between 1997 and 2008-2009 including Register of Australian Archives and Manuscripts, Picture Australia, Libraries Australia, Music Australia, Australia Dancing, PANDORA search service, ARROW Discovery Service and the Australian Newspapers Beta service.[7][8]

The key features of the service were designed to create a faceted search system specifically for Australian content. Tight integration with the provider databases has allowed "Find and Get" functions (e.g. viewing digitally, borrowing, buying, copying). Important extra features include the provision of a "check copyright" tool and persistent identifiers (which enables stable URLs).[2]

The scope of the project is to help "you find and use resources relating to Australia" and therefore the content is Australian-focused.[9] Much of the material may be difficult to retrieve with other search tools as it is part of the deep web, including records held in collection databases,[2] or in projects such as Picture Australia, Music Australia, the Register of Australian Archives and Manuscripts, Australia Dancing, Australian Research Online and the PANDORA web archive.[8] Trove includes content from many libraries, museums, archives and other organisations.[10]

The site's content is split into "zones" designating different forms of content which can be searched all together, or separately.[11]

The book zone provides access to books, audio books, theses, conference proceedings and pamphlets listed in Australia's National Bibliographic Database (ANBD), which is a union catalogue of items held in Australian libraries and a national bibliographic database of resources including Australian online publications.[14] Bibliographic records from the ANBD are also uploaded into the WorldCat global union catalogue.[15] The results can be filtered by format if searching for braille, audio books, theses or conference proceedings and also by decade and language of publication.[16] A filter for Australian content is also provided.[17][18] 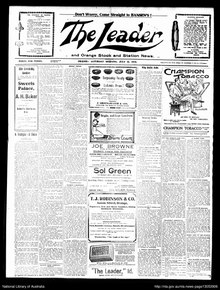 Front page of The Leader (Orange, New South Wales) 31 July 1915, the 10 millionth newspaper page to be made available through Trove.[19] 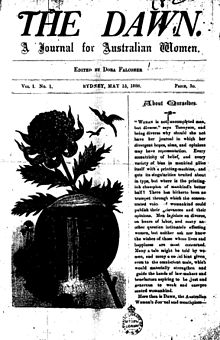 Front cover of The Dawn Issue 1, 15 May 1888. The first feminist magazine in Australia.

Trove provides text-searchable access to over 700 historic Australian newspapers from each State and Territory.[20] By 2014, over 13.5 million digitised newspaper pages had been made available through Trove as part of the Australian Newspaper Plan (ANPlan),[21] a "collaborative program to collect and preserve every newspaper published in Australia, guaranteeing public access" to these important historical records.[22]

The extent of digitised newspaper archives is wide reaching and includes now defunct publications, such as the Australian Home Companion and Band of Hope Journal and The Barrier Miner in New South Wales and The Argus in Victoria.[note 1][23] It includes the earliest published Australian newspaper, the Sydney Gazette (which dates to 1803), and some community language newspapers.[21] Also included is The Australian Women's Weekly.[24][note 2]

The Canberra Times is the only major newspaper available beyond 1957. It allowed publication of its in-copyright archive up to 1995 as part of the "centenary of Canberra" in 2013,[26] and the digitisation costs were raised with a crowdfunding campaign.[27] Also crowdfunded, the Australian feminist magazine The Dawn was included on International Women's Day 2012.[28][29]

The newspapers (frequently microfiche or other photographic facsimiles) were scanned and the text from the articles has been captured by optical character recognition (OCR) to facilitate easy searching, but it contains many OCR errors, often due to poor quality facsimiles.[31][32] Since August 2008 the system has incorporated crowdsourced text-correction as a major feature, allowing the public to change the searchable text. Many users have contributed tens of thousands of corrected lines, and some have contributed millions.[33] This collaborative participation allows users to give back to the service and over time will improve the database's searchability.[34][35] The text-correcting community and other Trove users have been referred to as "Trovites".[36]

The National Library of Australia combined eight different online discovery tools that had been developed over a period of twelve years into a new single discovery interface that was released as a prototype in May 2009 for public comment before launching in November 2009 as Trove.[17] It is continually updated to expand its reach.[5][37] With the notable exception of the newspaper "zone", none of the material that appears in Trove search results is hosted by Trove itself. Instead, it indexes the content of its content partners' collection metadata and displays the aggregated information in a relevance-ranked search result.[38]

The service is built using a variety of open source software.[39][40]

Several citation styles are automatically produced by the software, giving a stable URL to the edition, page or article-level for any newspaper. Wikipedia was closely integrated from the beginning of the project, making Trove the first GLAM website in the world to integrate the Wikipedia API into its product.[45]

Digital humanities researcher and Trove manager Tim Sherratt noted that in relation to the Trove API "delivery of cultural heritage resources in a machine-readable form, whether through a custom API or as Linked Open Data, provides more than just improved access or possibilities for aggregation. It opens those resources to transformation. It empowers us to move beyond ‘discovery’ as a mode of interaction to analyse, extract, visualise and play."[47]

The site has been described as "a model for collaborative digitization projects and serves to inform cultural heritage institutions building both large and small digital collections".[48]

The reach of the newspaper archives makes the service attractive to genealogists[49][50][51] and knitters.[5]

Trove received the 2011 Excellence in eGovernment Award and the 2011 Service Delivery Category Award.[52]

Retrieved from "http://en.turkcewiki.org/w/index.php?title=Trove&oldid=932488555"
This website is a mirror of Wikipedia, and is not affiliated with the Wikimedia Foundation.
Categories:
Hidden categories: