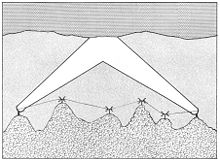 A tropospheric scatter system can bridge large distances while a microwave relay system (below) requires multiple relay stations due to its line of sight limitation. 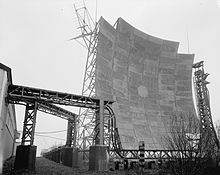 Tropospheric scatter (also known as troposcatter) is a method of communicating with microwave radio signals over considerable distances – often up to 300 kilometres (190 mi), and further depending on terrain and climate factors. This method of propagation uses the tropospheric scatter phenomenon, where radio waves at UHF and SHF frequencies are randomly scattered as they pass through the upper layers of the troposphere. Radio signals are transmitted in a narrow beam aimed just above the horizon in the direction of the receiver station. As the signals pass through the troposphere, some of the energy is scattered back toward the Earth, allowing the receiver station to pick up the signal.[1]

Normally, signals in the microwave frequency range travel in straight lines, and so are limited to line of sight applications, in which the receiver can be 'seen' by the transmitter. Communication distances are limited by the visual horizon to around 30–40 miles (48–64 km). Troposcatter allows microwave communication beyond the horizon. It was developed in the 1950s and used for military communications until communications satellites largely replaced it in the 1970s.

Historically, high gain dish or billboard antennas were required for tropospheric scatter systems as the propagation losses are very high; only about one trillionth (1 x 10−12) of the transmit power is available at the receiver. Paths were established at distances over 1,000 km. They required antennas ranging from 9 meters to 36 meters and amplifiers ranging from 1 kW to 50 kW. These were analogue systems which were capable of transmitting a few voice channels.

Troposcatter systems have evolved over the years. With communication satellites used for long-distance communication links, current troposcatter systems are employed over shorter distances than previous systems, use smaller antennas and amplifiers, and have much higher bandwidth capabilities. Typical distances are between 50 km and 250 km, though greater distances can be achieved depending on the climate, terrain, and data rate required. Typical antenna sizes range from 1.2 meters to 12 meters while typical amplifier sizes range from 10W to 2 kW. Data rates over 20Mbit/s can be achieved with today's technology.

Tropospheric scatter is a fairly secure method of propagation as dish alignment is critical, making it extremely difficult to intercept the signals, especially if transmitted across open water, making them highly attractive to military users. Military systems have tended to be ‘thin-line’ tropo – so called because only a narrow bandwidth ‘information’ channel was carried on the tropo system; generally up to 32 analogue (4 kHz bandwidth) channels. Modern military systems are "wideband" as they operate 4-16 Mbit/s digital data channels.

Civilian troposcatter systems, such as the British Telecom (BT) North Sea oil communications network, required higher capacity ‘information’ channels than were available using HF (high frequency – 3 to 30 MHz) radio signals, before satellite technology was available. The BT systems, based at Scousburgh in the Shetland Islands, Mormond Hill in Aberdeenshire and Row Brow near Scarborough, were capable of transmitting and receiving 156 analogue (4 kHz bandwidth) channels of data and telephony to / from North Sea oil production platforms, using frequency-division multiplexing (FDMX) to combine the channels.

Because of the nature of the turbulence in the troposphere, quadruple diversity propagation paths were used to ensure 99.98% reliability of the service, equating to about 3 minutes of downtime due to propagation drop out per month. The quadruple space and polarisation diversity systems needed two separate dish antennae (spaced several metres apart) and two differently polarised feed horns – one using vertical polarisation, the other using horizontal polarisation. This ensured that at least one signal path was open at any one time. The signals from the four different paths were recombined in the receiver where a phase corrector removed the phase differences of each signal. Phase differences were caused by the different path lengths of each signal from transmitter to receiver. Once phase corrected, the four signals could be combined additively. 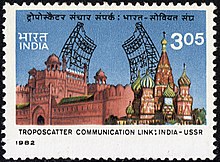 India-USSR troposcatter UHF link on a 1982 stamp of India

The tropospheric scatter phenomenon has been used to build both civilian and military communication links in a number of parts of the world, including:

White Alice/DEW Line/DEW Training (Cold War era)
A former military and civil communications network with eighty stations stretching up the western seaboard from Port Hardy, Vancouver Island north to Barter Island (BAR), west to Shemya, Alaska (SYA) in the Aleutian Islands (just a few hundred miles from the Soviet Union) and east across arctic Canada to Greenland. Note that not all station were troposcatter, but many were. It also included a training facility for White Alice/DEW line tropo-scatter network located between Pecatonica, Illinois to Streator, Illinois.

DEW Line (Post Cold War era)
Several tropo-scatter networks providing communications for the extensive air-defence radar chain in the far north of Canada and the US.

ET-A, USAREUR
A US Army network from RAF Fylingdales to a network in Germany and a single station in France (Maison Fort).

486L, MEDCOM
A US Navy network covering the European coast of the Mediterranean Sea from San Pablo, Spain in the west to Adana AFB, Turkey in the East, with headquarters at Ringstead in Surrey, England.

Communications to British Forces Germany, running from Swingate in Kent to Lammersdorf in Germany.

SEVER
A Soviet network stretching right across the USSR.

Indian Air Force
Part of an Air Defence Network covering major air bases, radar installations and missile sites in Northern and central India. The network is being phased out to be replaced with more modern fiber optic based communication systems.[2]

BACK PORCH and IWCS
Two networks run by the United States linking military bases in Thailand and South Vietnam.

Phil - Tai - Oki
A system linking the Philippines with Taiwan.

A troposcatter link was established by Cable & Wireless in 1960, linking Barbados with Port of Spain, Trinidad. The network was extended further south to Georgetown, Guyana in 1965.[3] [4] 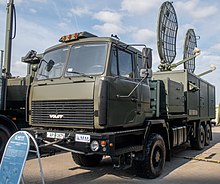 As well as the permanent networks detailed above, there have been many tactical transportable systems produced by several countries:-[5]

Retrieved from "http://en.turkcewiki.org/w/index.php?title=Tropospheric_scatter&oldid=939071534"
This website is a mirror of Wikipedia, and is not affiliated with the Wikimedia Foundation.
Categories:
Hidden categories: